Group portrait of German-Jewish refugee children who were sent to France on a Kindertransport in the spring of 1939 on the steps of the Quincy-sous-Senart children's home near Paris. 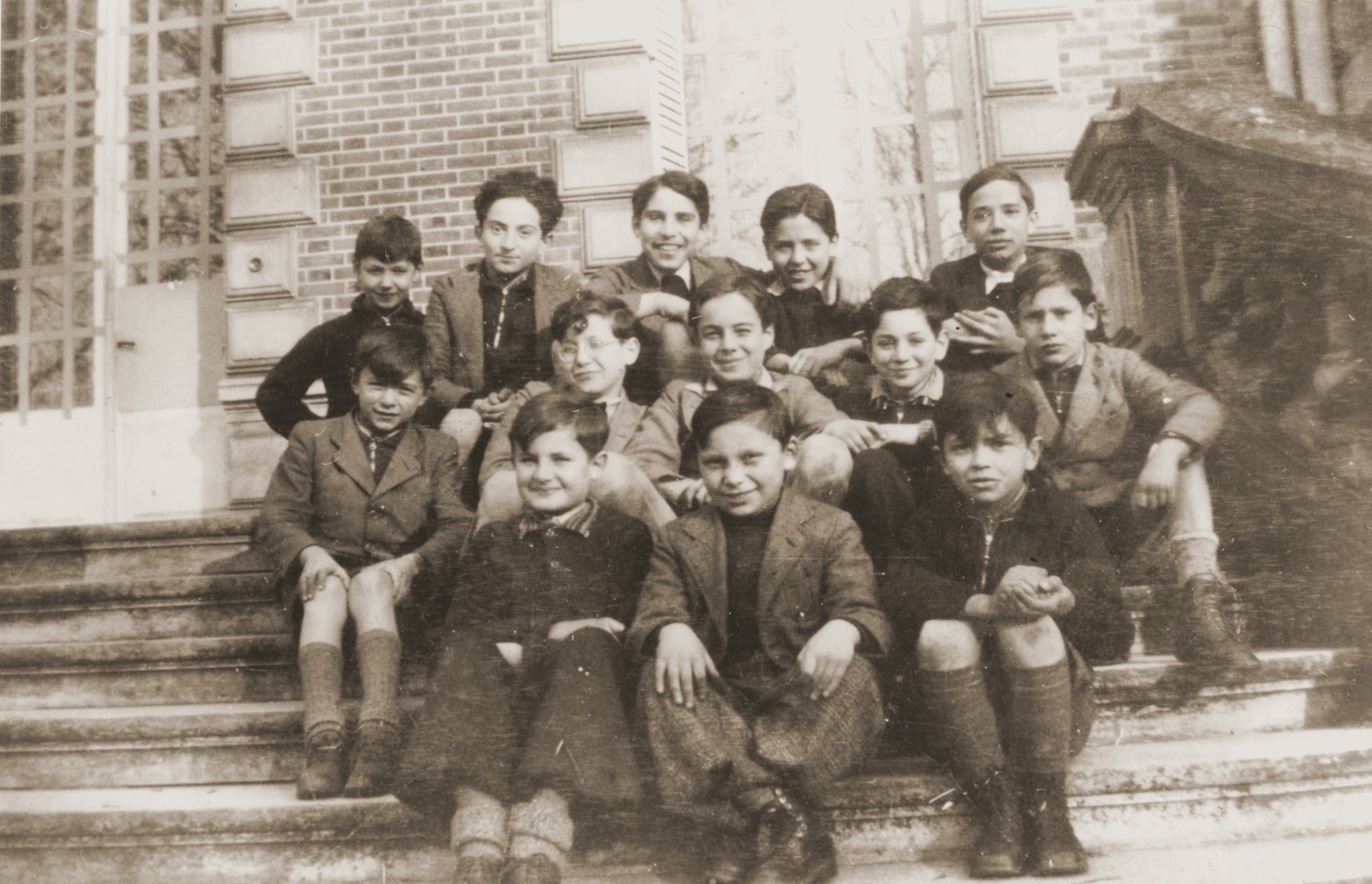 Group portrait of German-Jewish refugee children who were sent to France on a Kindertransport in the spring of 1939 on the steps of the Quincy-sous-Senart children's home near Paris.

https://www.ushmm.org/wlc/en/article.php?ModuleId=10006126.
Biography
Heinz Stephan Lewy was born in Berlin on March 11, 1925. He was the only child of Arthur and Gertrude (Puls) Lewy. His mother, who was not Jewish, died in 1931 when Heinz was only six years old. The following year, Heinz was placed in a Jewish orphanage. The Auerbach orphanage on Schoenhauser Allee sheltered about one hundred children who had lost one or both parents. Heinz' father, who was himself an orphan, had resided in this orphanage for seven years. Already in the first year of the Nazi regime Arthur was arrested and imprisoned in Oranienburg. There he was beaten so severely that he lost all his teeth and suffered a heart attack. Over the next five years the family endured increasing anti-Semitic agitation, but the turning point came in 1938. Soon after Arthur's second wedding (to Johanna Arzt), and on the very day of Heinz' Bar Mitzvah in March, Arthur was arrested again. Through he was promptly released, he was soon forced to sell his business. During Kristallnacht Arthur was able to evade arrest only by walking the streets until receiving the all clear signal from his wife. With the help of a relative in Boston, the family was able to secure American visas, but they were prevented from leaving the country when Arthur failed his medical exam at the American consulate. In desperation, Arthur sent Heinz on a Kindertransport to France in July 1939. The group of forty children were given refuge in a castle in the town of Quincy near Paris. In the fall of 1940, Quaker relief workers accompanied the children to an OSE home at Château de Chabannes in unoccupied France. Early in 1942, with the help of the International Red Cross, Heinz learned that his parents had reached America. At the last minute, after Arthur had passed a second physical, the couple sailed from Rotterdam. Three days later the Germans invaded Holland. Once they learned of their son's whereabouts, Arthur and Johanna applied to get him a visa, and Heinz was able to make his way to Casablanca. In June 1942 he sailed for New York on board the Serpa Pinto with a group of about 50 children that the American Friends Service Committee had helpfed to leave France, under the auspices of the U.S. Committee for the Care of European Children (USCOM). (The children on this convoy who left without their parents later became known as the One Thousand Children.) The following summer, eighteen-year-old Heinz was drafted into the American army. He landed in Europe just after D-Day. After fighting in the Battle of the Bulge and across Germany, Heinz' unit took part in the liberation of Buchenwald.