A series of photographs of the Jewish elderly living in nursing homes in Berlin, that was published in the Jewish newspaper, Juedisches Nachrichtenblatt, on March 10, 1939. 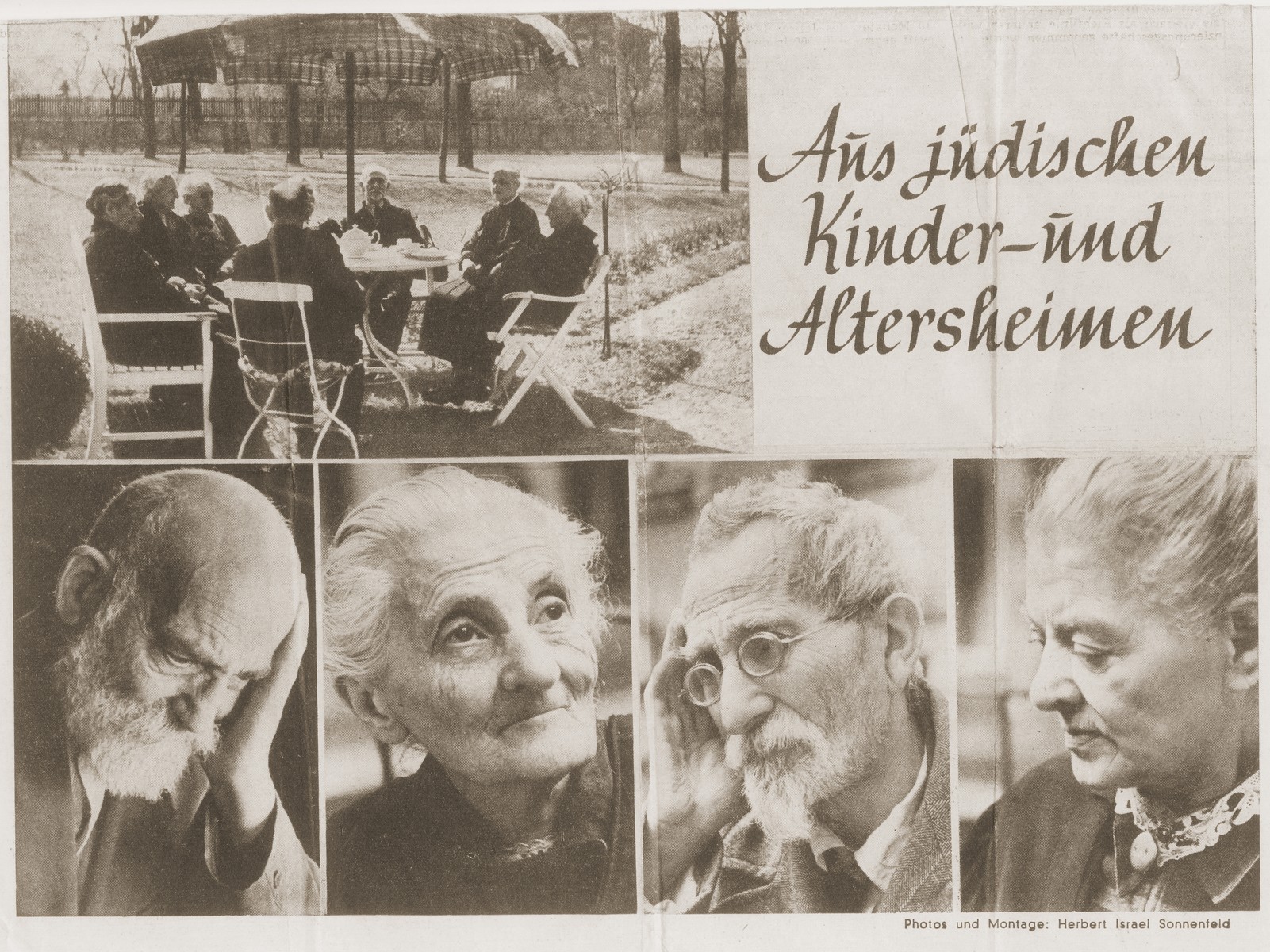 A series of photographs of the Jewish elderly living in nursing homes in Berlin, that was published in the Jewish newspaper, Juedisches Nachrichtenblatt, on March 10, 1939.

Biography
Herbert Sonnenfeld (1906-1972) and Leni Sonnenfeld (1907-2004), two leading German Jewish photojournalists of the 20th century, whose joint oeuvre chronicled Jewish life in Berlin on the eve of its destruction and documented the migration and re-establishment of Jewish communities in North America, Europe, and the Middle East. Herbert was born in Berlin-Neukoelin, the son of Josef and Lina Sonnenfeld, who owned a dry goods store on the Hermannstrasse. After finishing school, Herman worked for a time in a haberdashery owned by his uncle, before becoming a sales representative for a Berlin security company that sold house alarms and worked closely with the local police. In 1931 he married Leni and moved into an apartment on the Joachimsthaler Strasse. Herbert had been an amateur photographer since his youth and set up a darkroom in their new home. Soon after Hitler's rise to power in 1933, Herbert was dismissed from his job. Lacking any means of financial support, the couple applied to the Palestine Office for immigration certificates, though they fit neither category of qualified candidates: those that could help build the Yishuv (Palestine Jewish community) with their financial capital and those who could build it with their labor. When the couple was rejected as unsuited for agricultural work, Herbert decided to go there on his own for a short period. He brought his camera with him and took many pictures of various aspects of Jewish life in the Yishuv. Herbert was greatly disappointed by what he saw. He found conditions there to be primitive and disorganized and returned to Berlin after only two weeks, asserting that he could never live there. When Leni saw the pictures he took on the trip, she immediately recognized their quality and sought to have them published in the Jewish press. She took them to Robert Weltsch, chief editor of the Juedische Rundschau, a Zionist newspaper, who purchased them on the spot. This launched Herbert's career as a photojournalist, and he was soon supplying photographs to a number of Jewish publications, including the Juedische Rundschau, the Central Verein Zeitung, the Israelitische Familienblatt, the Gemeindeblatt der Juedischen Gemeinde zu Berlin, the Juedische Allgemeine Zeitung, Die Makkabi and Der Schild. Like his fellow Jewish photojournalists Abraham Pisarek, Arno Kikoler and a few others, Herbert could only work for Jewish organizations and publications. Like them, too, Herbert chose his subject matter carefully in accordance with the desire of the organized Jewish community to protect German Jews from resignation and despair. The intense interest of the German Jewish community in what was then happening in Palestine led to assignments to return to Palestine again and again in the mid-to-late1930s. As Herbert grew busier, Leni took on the role of his assistant. Together they went on assignments and developed the images in their dark room. Herbert covered all types of Jewish community activity, including performances of the Juedischer Kulturbund (The Jewish Cultural Society), sporting events of the Maccabi and Hakoach sports clubs, the Zionist training programs for settlement in Palestine of the Youth Aliyah organization, Juedische Winterhilfe welfare programs and all types of educational activities and institutions. He also made photographic portraits of leading Jewish figures such as the painters Ludwig Meidner and Max Liebermann and the philosopher Martin Buber. From 1936, Herbert taught photography to would-be Jewish émigrés in a vocational training program. Leni took her first photograph in a Jewish old age home in 1934, and by 1936, was on assignment in Sweden taking pictures of Jewish youth training for resettlement in Palestine at Youth Aliyah hachsharot (Zionist vocational training camps). The couple continued to photograph for the Jewish press until it was outlawed in November 1938. After Kristallnacht only a few sets of his photos were published in the Juedischen Nachrichtenblatt (Jewish News Sheet). Herbert and Leni had applied for American visas sometime in the mid-1930s and were put on a waiting list. They were notified by telegram that the visas had arrived only on the day after Germany's invasion of Poland in September 1939. The Sonnenfelds ran to pick up their visas, fearing it might already be too late to escape, but two months later they were on a train to Trieste, whence they sailed for the U.S. They were greeted in New York by Herbert's brother and sister-in-law, and the American Jewish Congress set them up with an apartment and photo studio. Soon after their arrival, Herbert began taking pictures for the Jewish National Fund and numerous other Jewish organizations. In May 1942, he was the only photographer invited to attend the Zionist Organization of America conference at the Biltmore Hotel in New York, at which the ZOA adopted the resolution advocating the establishment of a Jewish Commonwealth in Palestine. Several months later, Herbert was drafted into the American army and sent to England, where he became photographer at the Litchfield Barracks reception camp for U.S. soldiers. While Herbert was away, Leni continued Herbert's assignments and launched a photography career of her own. One of her biggest assignments was to cover the Fort Ontario refugee center in Oswego, NY in 1944. After the war Leni took assignments for such publications as the New York Times and Life Magazine, as well as for numerous Jewish organizations. These assignments took her to Israel, Spain, Morocco, Iran and elsewhere. She was particularly well known for her photographs of the early years of the State of Israel. Herbert, who had developed an interest in painting after his retirement, died in 1972, leaving Leni to care for their growing archive of negatives that ultimately numbered over 225,000. She sold their Berlin oeuvre to the Juedisches Museum Berlin in the 1990s; the rest she kept at home in New York. Leni continued to photograph well into her 80s. She died at the age of 96.