An SS officer questions two Jewish resistance fighters during the suppression of the Warsaw ghetto uprising, as SS-Brigadefuehrer Juergen Stroop (rear, center) and his security detail look on. 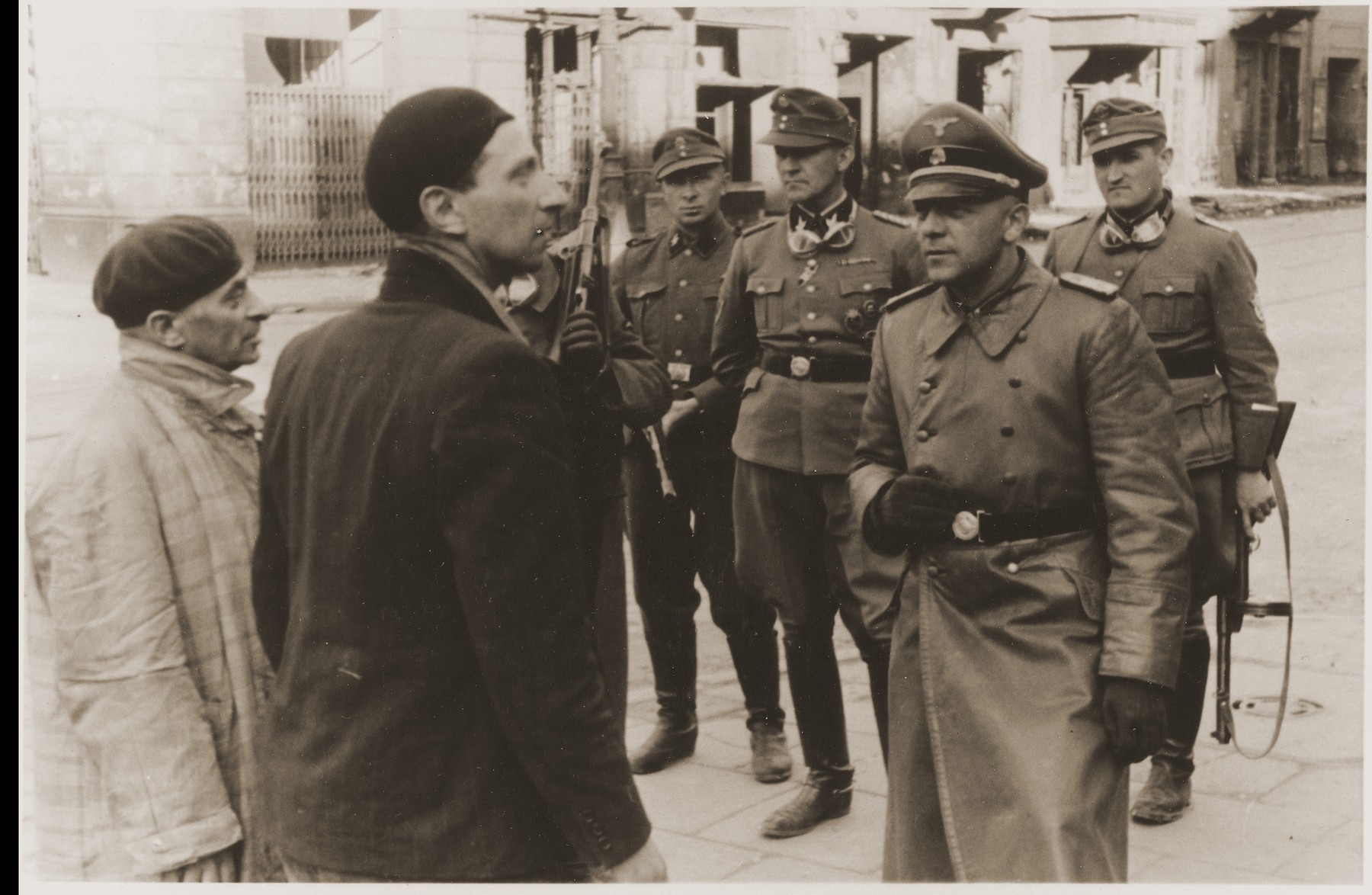 An SS officer questions two Jewish resistance fighters during the suppression of the Warsaw ghetto uprising, as SS-Brigadefuehrer Juergen Stroop (rear, center) and his security detail look on.

Event History
The Stroop Report was an album prepared by SS Major General Juergen Stroop, commander of the German forces which liquidated the Warsaw ghetto, to document the suppression of the ghetto uprising in the spring of 1943. Commissioned by Friedrich Wilhelm Krueger, Higher SS and Police Leader in Krakow, and bound in leather, the report was intended as a souvenir album for Heinrich Himmler to celebrate the hard won victory, which took twenty days and 1,200 SS, Wehrmacht, and police troops to accomplish. The Stroop Report consists of three parts: an introduction and summary of SS operations, a collection of daily communiques, and a series of approximately 52 photographs. Three albums were prepared for Himmler, Krueger and Stroop, all of which were recovered after the war. One of them was introduced as evidence at the International Military Tribunal in Nuremberg and later published under the title, "The Stroop Report." The albums --which bear slight discrepancies in the number of photos they contain-- are currently located at the National Archives (Washington), the Bundesarchiv (Koblenz), and the Institute of National Remembrance (Warsaw).
The Warsaw ghetto uprising (April 19--May 16, 1943) was the twenty day battle initiated by the Jewish fighting forces in Warsaw when German troops entered the ghetto to begin the final round of deportations. Having received advanced warning of the timing of the action, the entire population of the ghetto disappeared into prepared hiding places before the Germans arrived. Non-compliance with orders to assemble for deportation was accompanied by hit and run attacks on German units, which forced their temporary withdrawal from the ghetto. After several days of clashes with resistance fighters, the Germans resolved to burn down the ghetto and smoke the Jews out of their concealed bunkers. The Jewish resistance, led by Mordecai Anielewicz, held out until May 8, when its headquarters at Mila 18 was discovered and many of its leaders (including Anielewicz) killed. It was another week, however, before the Germans snuffed out the last pockets of resistance. Not having planned for an organized retreat from the ghetto, only a few dozen fighters were able to escape to the Aryan side of Warsaw. This, they accomplished by winding their way through the city's sewer system. Some 56,000 Jews, according to Stroop's report, were killed or captured during the ghetto revolt. Of those who were taken alive, 7,000 were deported to their immediate death in Treblinka. Another 22,000 were sent to Majdanek. Between 14,000 and 16,000 Jews went to the Poniatowa labor camp, and between 5,000 and 6,000 were sent to the Trawniki camp. The Warsaw Jews who were deported to Poniatowa and Trawniki were shot during the Erntefest action of November 3-4, 1943 that was intended to eliminate the remaining Jews in the Lublin district. The majority of those sent to Majdanek were also murdered in this action, but several thousand others, who had been transferred to other camps --including Auschwitz, Budzyn and Krasnik-- after their arrival in Majdanek, were spared. Some of these Jews, who were later evacuated toward the west, survived the war.
https://encyclopedia.ushmm.org/content/en/article/warsaw-ghetto-uprising.
Biography
Juergen (Josef) Stroop was born September 26, 1895 in Detmold, Germany and executed by hanging in Warsaw on March 6th, 1952. He quickly scaled the SS ranks to become an SS-Brigadefuehrer and police Colonel by the start of World War II. In the first years of the war, his 'pacification' successes and 'struggle against banditry' in the occupied territories of Greece, Poland, Czechoslovakia, and Russia earned him a favorable reputation among Reich military leaders. When the first clashes of the Warsaw ghetto uprising reverberated through the city his reputation for exacting brutality had preceded him, and (now SS-Gruppenfuehrer) Stroop was called from his activities in Lvov to suppress the rebellion and liquidate the fifty-six thousand remaining Jews. After twenty days of bloodshed, three hundred SS and Wehrmacht soldiers had died and another thousand had been injured. Only twenty-five thousand Jews remained alive, the ghetto was in ruins, and the uprising had been crushed. The surviving Jews were sent to their deaths at Treblinka, Majdanek, Poniatowa, and Trawnika; Stroop received an Iron Cross (First Class) in recognition of his service, and was promoted to a Higher SS and Police Leader and transferred to Greece. He compiled an account of the operation in what would become known as the Stroop Report (Stroop Bericht).