The last letter written by Jakob Michel from the Les Milles camp, addressed to Mrs. Wolffer, a woman in Switzerland who came from the same German village as Jakob. 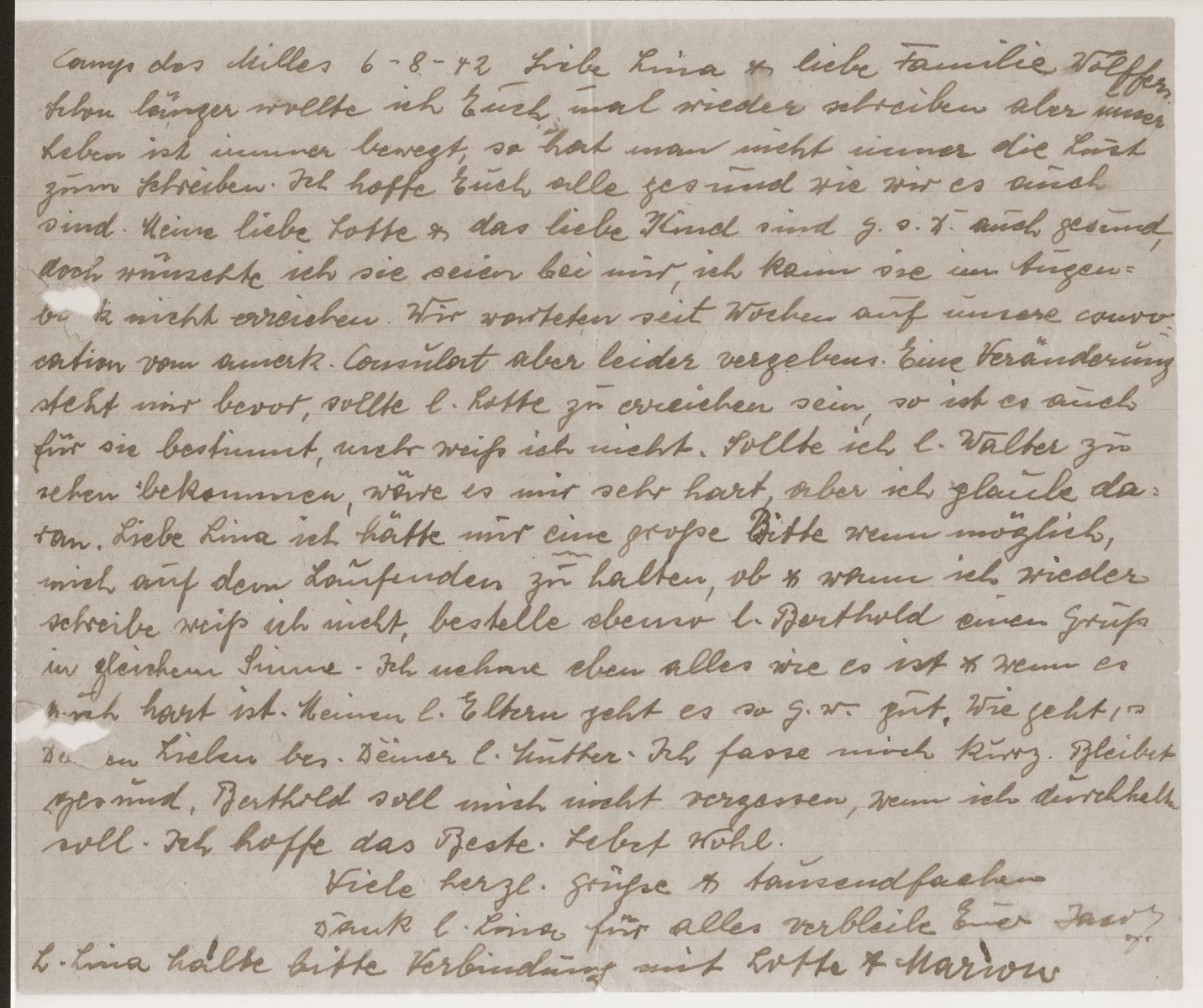 The last letter written by Jakob Michel from the Les Milles camp, addressed to Mrs. Wolffer, a woman in Switzerland who came from the same German village as Jakob.

In the letter Jakob asks her to look after his family. When Marion was sent to Switzerland by the OSE, Mrs. Wolffer became her foster mother.

[Sources: Ryan, Donna Frances, Vichy and the Jews: The Example of Marseille, 1939-1944. Georgetown University Ph.D., 1984]
Biography
Marion Michel is the only child of Jakob and Charlotte Michel. She was born on October 18, 1929 in Andernach, Germany, where her father and uncle Julius owned a wine business. In 1936 the business was abandoned, and the Michels moved to Cologne. There Jakob worked with his other brother, Berthold, in the fur trade, until deciding to leave Germany. The Michel family left for Brussels in May 1939. Immediately after the German invasion of Belgium on May 10, 1940, all male Jewish refugees from Germany were ordered to report to the German authorities. Jakob turned himself in and was sent to the St. Cyprien internment camp in France. While his wife and daughter remained in Brussels, Jakob was transferred first to Gurs and then to Les Milles. In 1941 Charlotte and Marion fled to Marseilles, where they stayed for one month, before moving to Aix-en-Provence. The two lived in Aix until the summer of 1942, when the deportations began. Charlotte heard that the OSE (Oeuvre de Secours aux Enfants) was sheltering Jewish children, and arranged for the Jewish welfare organization to take Marion. The day before she was to be picked up they traveled to Les Milles to see Jakob. This was the last time Marion was to see her parents. The OSE took Marion to the Hotel Bompard in Marseilles. Charlotte remained in Les Milles and was deported to Auschwitz the next day. Jakob was deported shortly thereafter. Marion lived at the Hotel Bompard until October 1942, when she was transferred to the OSE children’s center at Chateau du Couret. In May 1943 she was transferred to another home in Megeves, where she stayed for three months, until the OSE smuggled her into Switzerland. After crossing the border, Marion was hospitalized for malnutrition and chronic leg sores in two refugee camps near Geneva. In September 1943, she was taken in by the Wolffers, a Jewish family living in Zurich. Mrs. Wolffer came from the same German village as Marion’s father, and after the war, offered to adopt the orphaned child. Marion, however, wanted to try to contact some her mother’s relatives in the United States. Ultimately, she was able to reach her uncle, Julius, who had emigrated to the U.S. in 1940. In the summer of 1946, Marion sailed aboard the SS Gripsholm to the New York. In Philadelphia, she was reunited with Julius, to whom Charlotte had entrusted the family’s photographs. Marion was eventually adopted by her uncle and settled in Philadelphia. In 1955 she married Alan Oliner.