Jakub Finkelstajn sits among the members of the Buchenwald children's transport at an outdoor gathering on the grounds of the Ecouis children's home soon after their arrival. 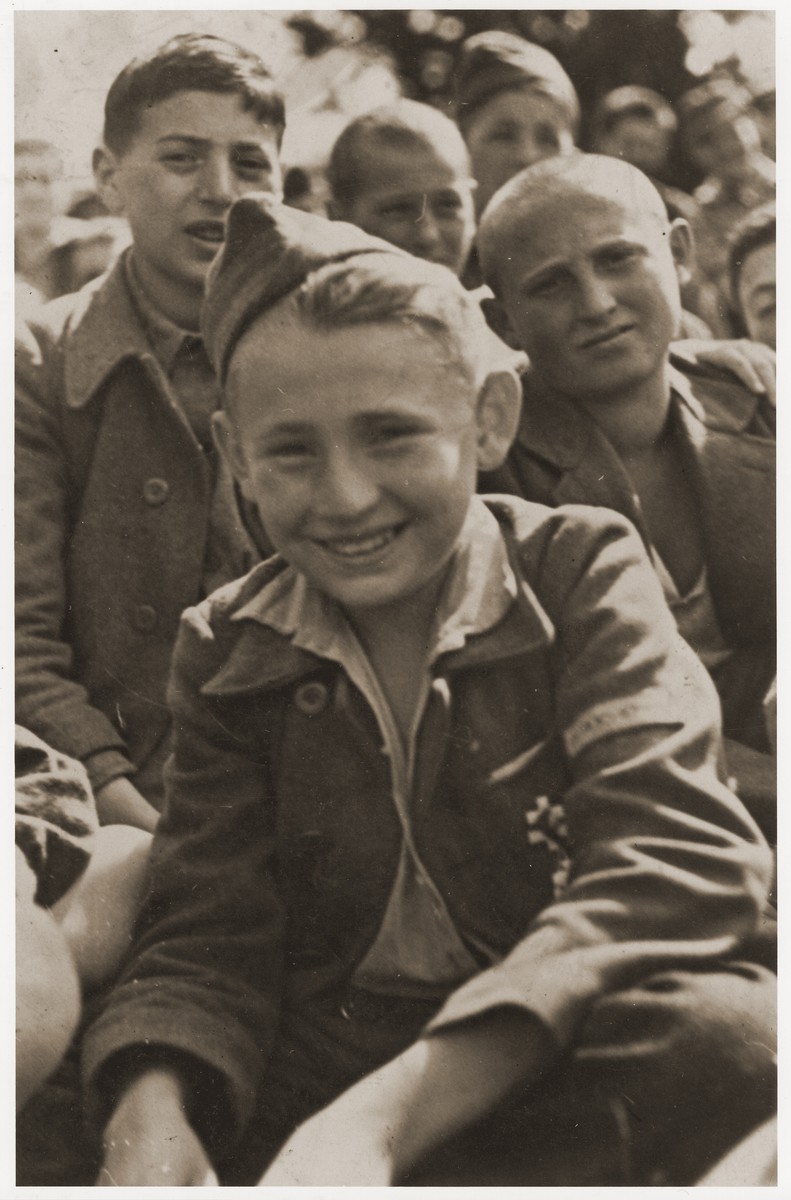 Jakub Finkelstajn sits among the members of the Buchenwald children's transport at an outdoor gathering on the grounds of the Ecouis children's home soon after their arrival.

A French military decoration is pinned to the pocket of his uniform.

[Sources: Hemmendinger, Judith and Krell, Robert. "The Children of Buchenwald." Gefen Publishers, 2000; Grobman, Alex. "Rekindling the Flame." Wayne State University Press, 1993; Hazan, Katy, "Chronologie de l'histoire de l'OSE L'action de l'OSE apres la guerre."
Biography
Chaim and Jakub Finkelstajn (now Charles and Jacques Finkel) are the children of Isaac and Estera (Kartusz) Finkelstajn. Chaim was born August 13, 1929 and Jakub, February 18, 1932 in Strzemieszyce, Poland. Their younger sister, Dora was born in 1935. Chaim and Jakub lived in Strzemieszyce until June 1943, when they were deported to Blechhammer, a sub-camp of Auschwitz. In January 1945 the brothers were sent on a death march from Blechhammer to Gross Rosen. Five days later they were sent on to Buchenwald, where they were liberated on April 11, 1945. That June Chaim and Jakub joined a children's transport of orphans who were being evacuated from Buchenwald to France. The transport was taken to the OSE children's home in Ecouis, where the brothers remained until January 1946. Chaim and Jakub were then transferred to the OSE home in Versailles. After five years at this home, Jakub moved to Geneva, where he attended an ORT school. Chaim remained in Paris and attended the ORT school in Montreuil. In the mid-1950s Jakub left Switzerland and returned to Paris. Both brothers later married and settled in Paris. Their parents and sister did not survive the war.