Group portrait of members of the Ezra youth movement in a "harvesting camp" outside of London, where they assisted local farmers. 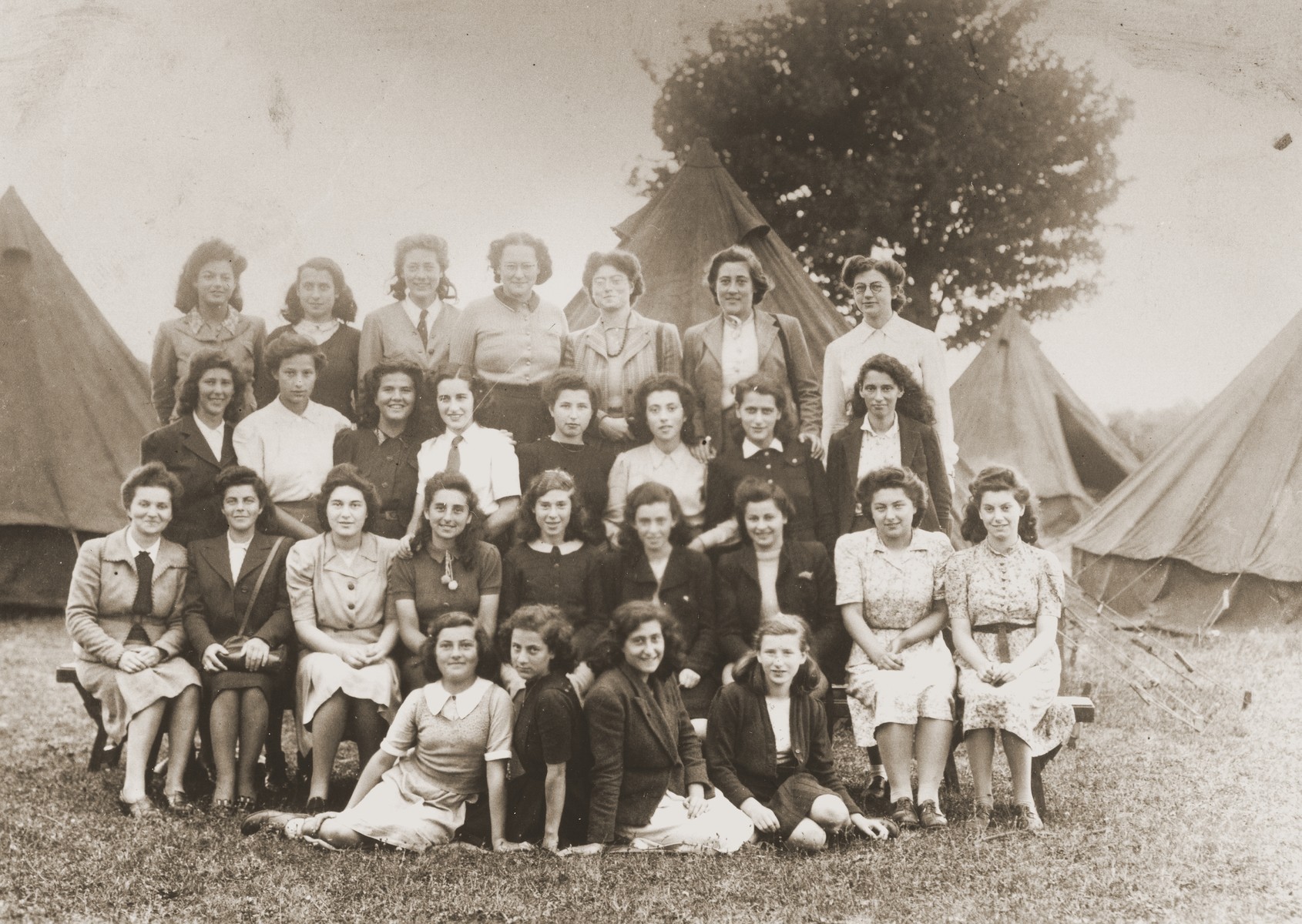 Group portrait of members of the Ezra youth movement in a "harvesting camp" outside of London, where they assisted local farmers.

Most of the girls are German Jews who came to England on the Kindertransport. Trudel Farntrog is pictured in the back row on the right.

Event History
Ezra was an orthodox Jewish youth movement affiliated with Agudat Yisrael. It was headed by Adolf (Avraham) Kohn, who later emigrated to England and became principal of the Jewish Teachers Seminary for Girls in Gateshead

https://www.ushmm.org/wlc/en/article.php?ModuleId=10007224.
Biography
Trudi Wiener (born Trudel Farntrog) is the daughter of Martin and Martha (Lipstadt) Farntrog. She was born September 6, 1921 in Fuerth and had two sisters, Miri (b. 1923) and Emmi (b. 1925). Trudi's parents met in Palestine but returned to Germany at the start of World War I. Her father then enlisted in the German Army, where he earned the Iron Cross. After the war her parents married and settled first in Fuerth and later in Nuremberg. Trudi and her sisters joined Ezra, an orthodox Jewish youth movement affiliated with Agudat Yisrael. The girls summered at the youth movement's vacation home in the village of Sulzbuerg. After Jewish children were forbidden to attend German schools in 1934, the girls attended the Israelitische Realschule. Trudi studied at the Jewish teachers seminary in Wuerzburg from May to November 9, 1938. There, she met Gerd Zwienicki, a rabbinical student who was teaching Spanish at the seminary. On the night of Kristallnacht, Trudi fled from the seminary and found shelter with Jewish friends elsewhere. Her family home in Nuremberg was ransacked, and her father was imprisoned. After his release, the family made arrangements to leave Germany. In April 1939 Trudi's sisters left for England on a Kindertransport. Trudi was unable to go with them because she was seventeen, one year over the maximum age. The rules were later eased and she too was allowed to leave, followed soon after by her parents. With the outbreak of World War II, Miri and Emmi were evacuated from London to the countryside. Trudi and her parents, however, had to appear before a judge as German refugees. They were classified as "suspect enemy aliens" and in the spring of 1940 Trudi and her father were deported to the Isle of Man. Trudi passed the time studying and tutoring other refugees. She later moved to the Breakwater, a hotel on the Isle of Man that housed many orthodox detainees (and provided them with kosher food). Trudi and her father were released after the family received visas for the United States. While waiting to emigrate, Trudi trained as a stenographer in London. She spent summers in Ezra movement's "harvesting camps" assisting local farmers. In 1947 Trudi finally left for New York, where she became reacquainted and later married Rabbi Gerd Zwienicki on May 9, 1948.