Friends boating on the Nemunas River in the village of Kacergine, near Kaunas. 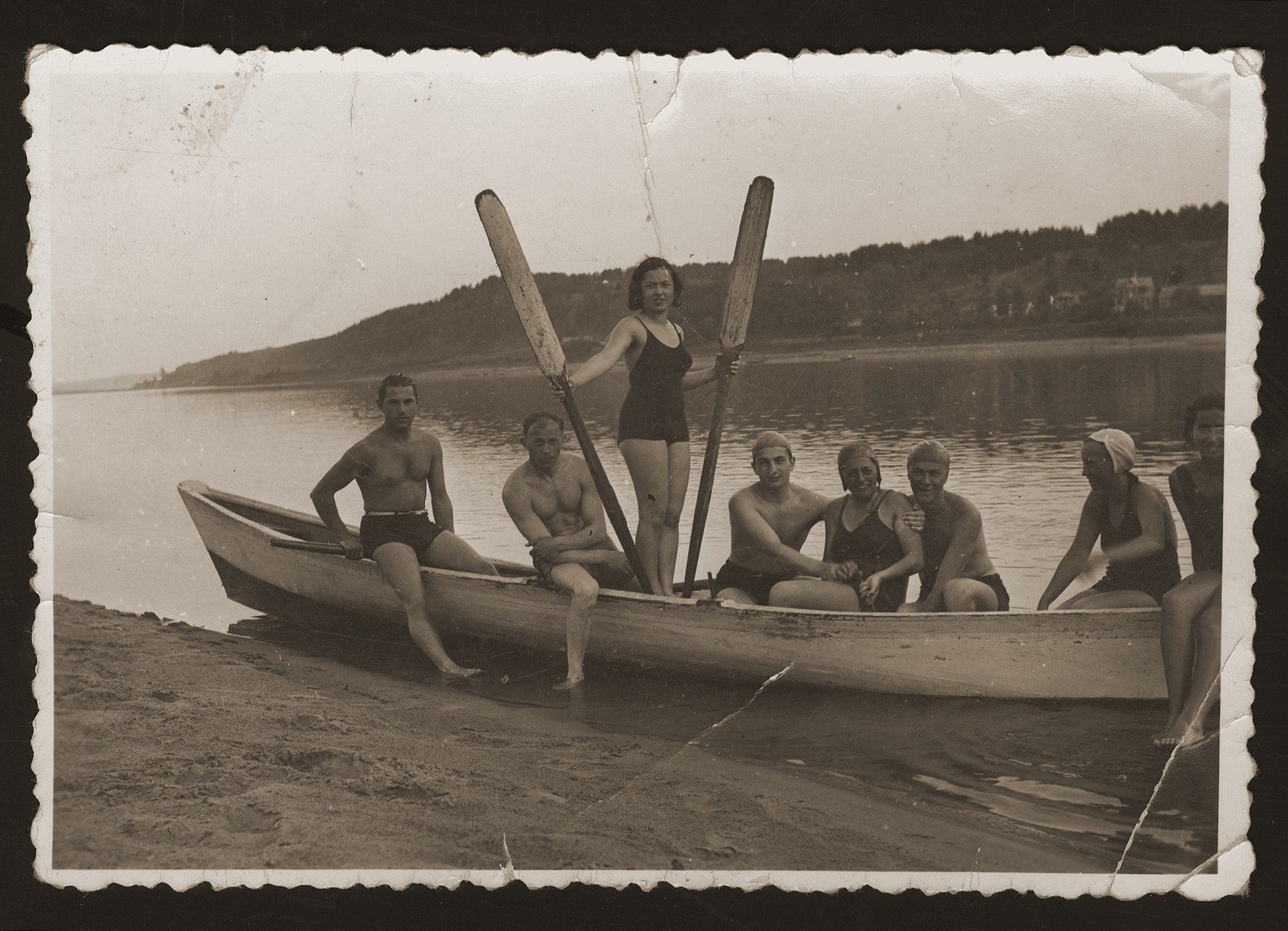 Friends boating on the Nemunas River in the village of Kacergine, near Kaunas.

Biography
Yehuda Zupovitz, the youngest of four children, was born in July 1916 in the town of Jonava, Lithuania. He moved to Kovno in the 1930s in order to study engineering. During this period Yehuda became active in the Betar revisionist Zionist youth movement and the Zionist student organization "El-Al" (where he met the photographer Zvi Kadushin). After graduating, Yehuda worked as an engineer in Kovno, where he also served as an officer in the Lithuanian Army reserves. In 1938 he met Yehudit (Dita) Katz, whom he married in February 1941. After the formation of the Kovno ghetto in the summer of 1941, Yehuda and his two older brothers, Moshe and Meir, volunteered for the Jewish ghetto police. Subsequently, Yehuda was made deputy chief. In this capacity he organized the formal ceremony in which the members of the ghetto police signed a special oath pledging to act on behalf of the Jewish community. Yehuda used his position on the police force to help the ghetto underground, in which he also assumed a leadership role. Among his resistance activities was training the members of the underground in the use of firearms. In addition, Yehuda encouraged his friend Zvi Kadushin to document the ghetto in photographs so as to create a permanent visual record for posterity. Yehuda helped to hide this collection of prints and negatives, much of which survived the war. During the Police Action of March 27, 1944 Yehuda was taken to Fort IX, where he was interrogated about the activities and hideouts of the ghetto underground, including the whereabouts of the Kadushin photographic collection. Despite the beatings and other forms of torture to which he was subjected, Yehuda refused to disclose any information. Soon after, he and his brother Meir were executed along with 34 other policemen.

Dita Sperling (born Yehudit Katz, later Yehudit Zupovitz) is the daughter of Itzhak and Lola Katz. She was born in Kovno on April 15, 1922, where her father worked as an economist and her mother, as a dentist. Dita has one younger brother, Zvi. She married Yehuda Zupovitz during her last year of high school, five months before the start of the war. In the ghetto she and Yehuda lived with her mother, grandfather, brother and aunt. Dita smuggled food while on work details outside of the ghetto in order to keep the family fed. Yehuda kept much of his underground activity a secret from Dita, but he did teach her how to shoot a rifle. Shortly after Yehuda's arrest in March 1944, Dita was sent to the Sanciai labor camp. From there, she was deported to Stutthof in July. Dita survived along with her mother and brother. Her father was killed in the June 1941 pogroms in Kovno; and her grandmother, Basha, was killed during the March 1944 action that targeted the children and the elderly.

George Kadish (Hirsh Kadushin) taught science at a Hebrew high school in Kovno before the war. The first violent attacks against Kovno's Jews in June and July, 1941 moved Kadish, an avid amateur photographer, to document the community's ordeals. He secretly photographed over 1,000 images of ghetto life, sometimes even snapping pictures with a hidden camera through the buttonhole of his overcoat. In the x-ray department of the hospital where he was assigned to work, he bartered for film and developed his negatives. He then smuggled them out in a set of crutches. In late March, 1944 Kadish learned that the Gestapo, hearing of his photographic endeavor, was searching for him. Kadish fled the ghetto and went into hiding. He photographed the burning of the ghetto from the Aryan side. Following the liberation, he returned to the ghetto area. He photographed its remains, and dug up his prints and negatives that he had buried in milk cans beneath his house. Kadish moved to the United States and lived there until his death in August, 1997.