Members of the Shlachter family outside their home in Dabrowa Bialostocka. 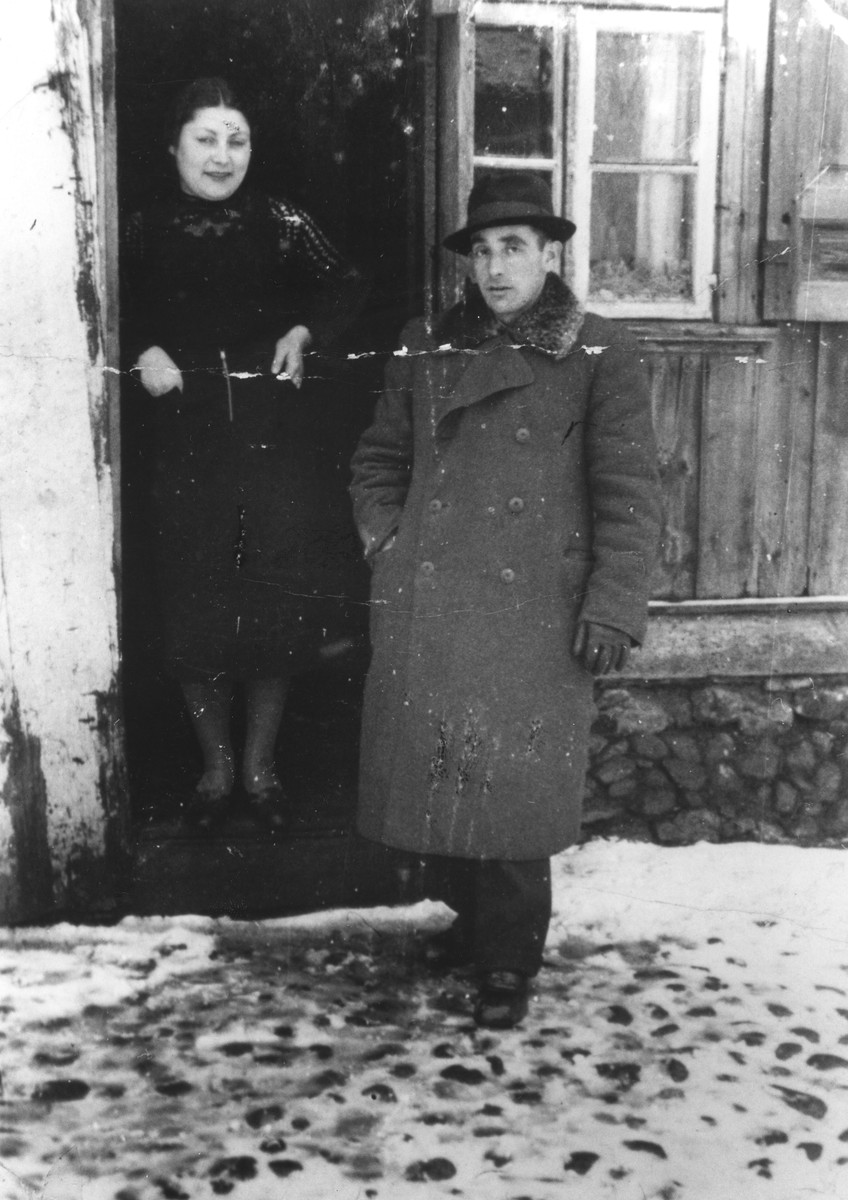 Members of the Shlachter family outside their home in Dabrowa Bialostocka.

Biography
Sam Holstein (born Shmuel Yitzhak Holstein), the donor's father, was the youngest of nine children born to Tova and Yehezkel Holstein, adherents of the Alexander Hasidim in Zyrardow, Poland. Shmuel's father earned his living as a glass merchant and picture framer. In 1928 Shmuel's mother died and two of his siblings immigrated to the United States. Shmuel left Poland to join them on August 31, 1939, just one day before the outbreak of World War II. During the trip to America he met Rena Schlachter, whom he married the following year. Shmuel's father and six siblings remained in Poland. All were sent to the Warsaw ghetto, with the exception of a married sister, who was in Lodz. Shmuel's father was killed in the Warsaw ghetto when he was run over by a German vehicle. Most of his siblings (Azriel, Sara, Leah, Chava) were deported from the ghetto and killed in Treblinka. One sister, Shifra, however, escaped to the Aryan side, where she supported herself by selling postcards on the street. Shifra barely managed to escape when, at one point, she and her niece were spotted by a German. Her niece was shot. Shortly afterward, Shifra and her husband left Warsaw for Germany on a transport of Polish forced laborers.

Rena Holstein (born Rena Schlachter), the donor's mother), is the daughter of Binyamin and Sara Friedl Schlachter from Dabrowa Bialostocka. Her father's family name was Hein, but he took his wife's maiden name, Schlachter, soon after their marriage to evade conscription to the Russian army. From then on, the family name was Schlachter in Europe and Hein in America. Rena's father was killed in a pogrom in 1917 when she was only eighteen months old. Her mother was left a widow with eight children, three of whom died in childhood. Four of Rena's siblings (Moshe, Chaim, Lilly and Alta) immigrated to America in the 1930s. Rena left Poland to join them on August 31, 1939. Remaining behind were her mother, married brother, Aaron Shmuel, and her married sister, Zipki. For two years they lived under Russian occupation, during which the family maintained a limited correspondence with their relatives in America. This ended with the German occupation. In 1942 the town of Dabrowa Bialostocka was leveled by the Germans in retaliation for the partisan shooting of a German soldier. The Jews, including presumably the Schlachters, were moved to the Sochovolya ghetto. Soon after they were deported to their deaths in Treblinka.