Two young Jewish sisters, Felice and Beate Zimmern, pose outside the home of Gaston and Juliette Patoux, the French couple who had sheltered them during the German occupation. 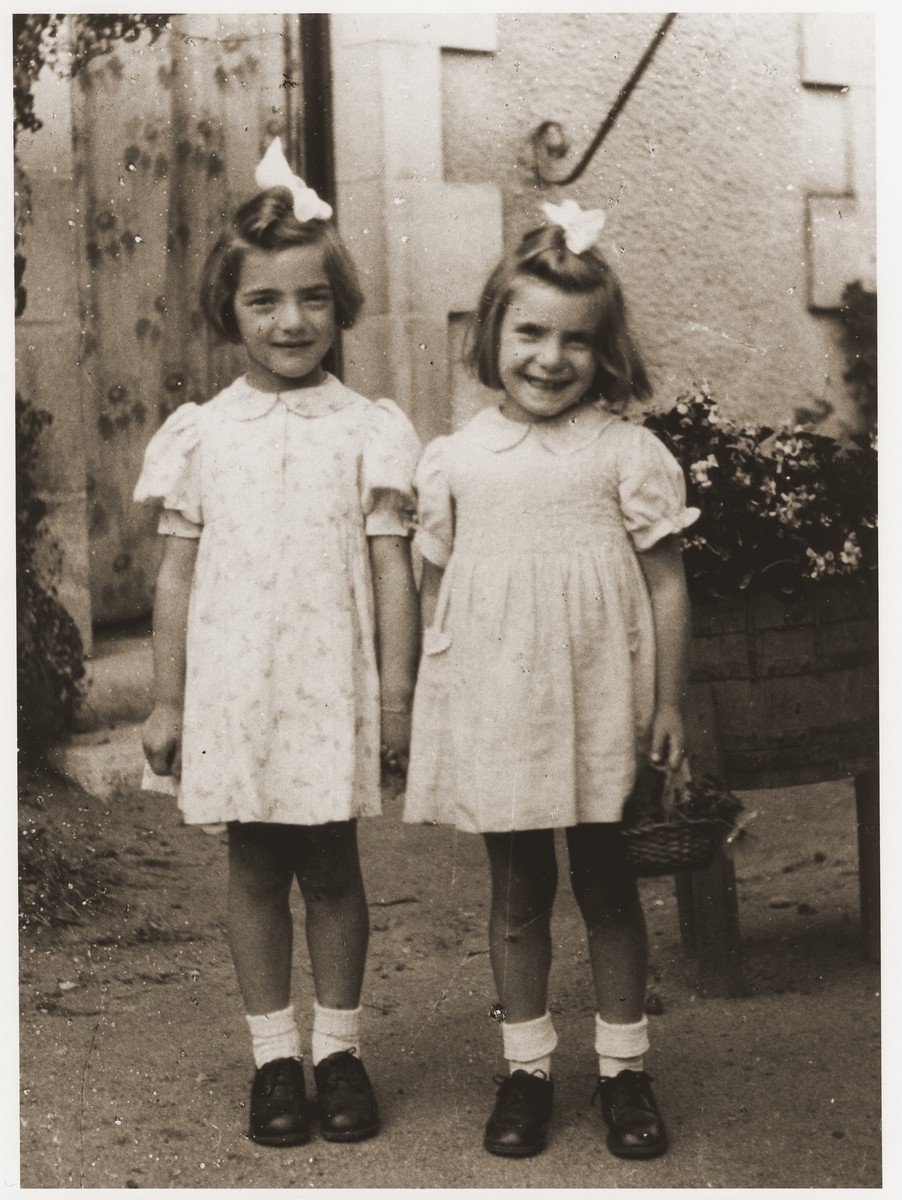 Two young Jewish sisters, Felice and Beate Zimmern, pose outside the home of Gaston and Juliette Patoux, the French couple who had sheltered them during the German occupation.

The girls, who have moved to the OSE children's home at Taverny after the war, are paying a visit to their rescuers.

Event History
The Taverny children's home, Chateau de Vaucelles, was opened in 1945 to accommodate 60 religious child survivors of Buchenwald. It was directed by Judith Hemmediger and her assistant Gaby (Nini) Wolf.
Biography
Felice Stokes (born Felice Zimmern) is the daughter of David (b. 1896) and Lydia (Bloch) Zimmern (b. 1898). She was born October 18, 1939 in Walldurn, Germany. She has one older sister, Beate (b. December 30, 1937). On October 22, 1940 the Zimmern family was deported over the French border to the Gurs internment camp. In early 1942, a relief worker from the OSE came to the camp to request permission to remove the children. The Zimmerns agreed, and the children were sent to La Pouponnière, a home for preschool age children in Limoges. Felice and Beate lived there for two years, and were then hidden apart from one another separate private homes. For the next two years Felice lived with Gaston and Juliette Patoux, farmers who owned a vineyard in La Caillaudière, near Vendoeuvres. The Patoux family cared for her as if she were their own child until liberation. Three months before the end of the war, Beate joined her there. When the war was over, the girls moved to OSE homes in Draveil (where they lived for two years) and Taverny (where they stayed for another three years), before immigrating to the United States in 1951. Felice and Beate's parents were transferred from Gurs to Rivesaltes in August 1942, and from there to Drancy in September. They were deported to their death in Auschwitz on convoy #40 that departed November 4, 1942. In 1974 Gaston and Juliette Patoux were recognized by Yad Vashem as Righteous Among the Nations.