Certificate issued to the donor's father, David Schwab, by the Lorrach district office, for having earned a medal for his military service on the front lines during the [First] World War. The certificate is issued "In the Name of the Leader and Chancellor." 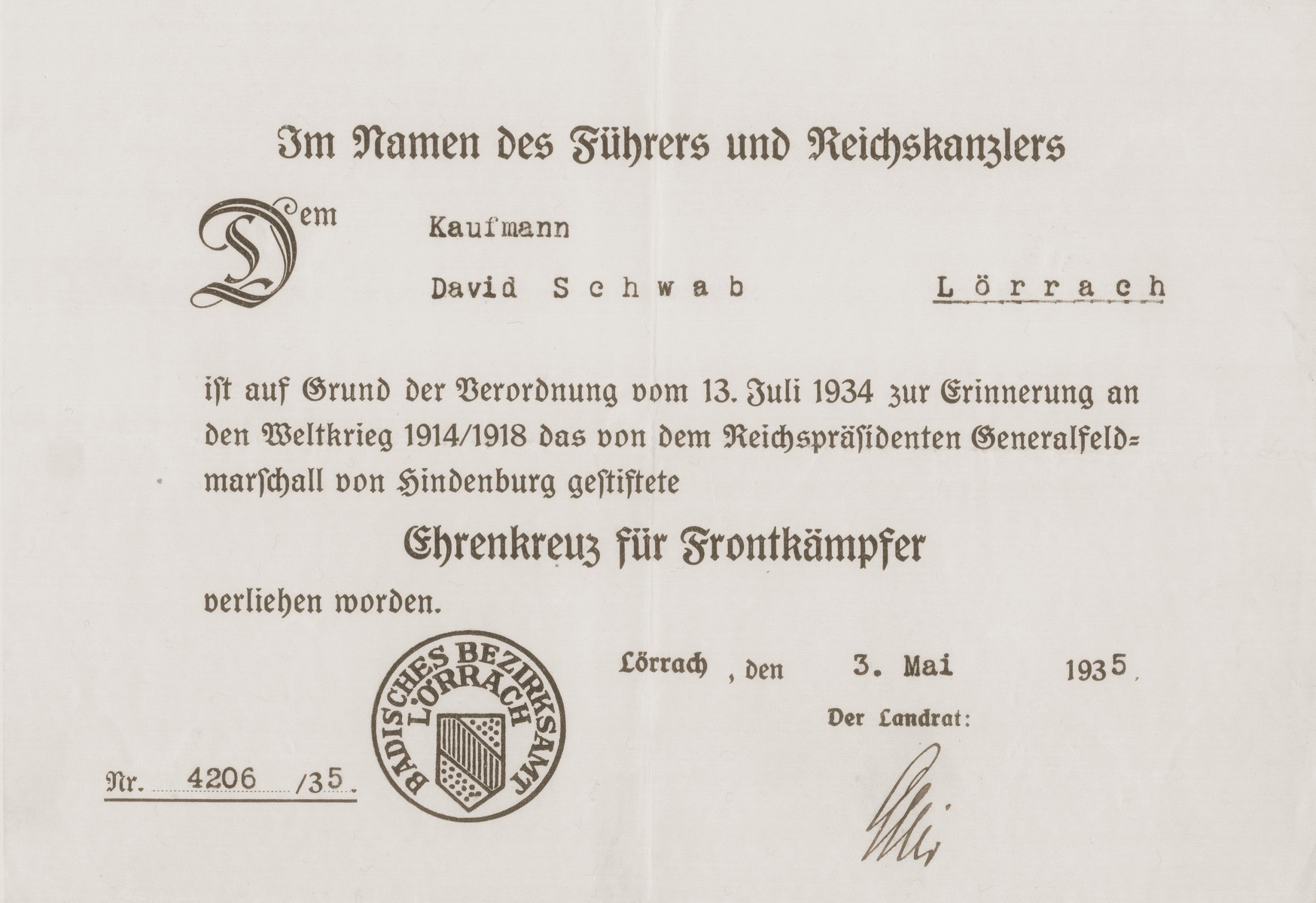 Certificate issued to the donor's father, David Schwab, by the Lorrach district office, for having earned a medal for his military service on the front lines during the [First] World War. The certificate is issued "In the Name of the Leader and Chancellor."

Biography
Gerd (now Gerald) Abraham Schwab is the son of David and Paula (Kleefeld) Schwab. He was born February 19, 1925 in Freiburg im Breisgau, Germany, where his father owned an international plumbing supply company with a branch in Basel, Switzerland. Gerd had one sibling, Margot (b. 1920). The Schwabs were somewhat observant Jews who attended synagogue on holidays and held a Bar Mitzvah for their son in 1938. Until 1933, Gerd attended the local Volksschule [primary school] in Freiburg. In April or May of that year, following Hitler’s rise to power and the economic boycott of Jewish businesses, the Schwabs left Germany for Switzerland. They hoped to settle in Basel near their business, but the Swiss authorities would not permit them to remain for more than a brief period. The family therefore moved to St. Louis, a town just over the French border from Basel. For the next two years Gerd’s father commuted to his company in Basel on a daily basis. In 1935, however, the French implemented a new measure stipulating that refugees could no longer reside within 100 km. of the border with Germany. Realizing that if they were to move inland they would have to abandon the company in Basel, Gerd’s parents decided to move back to Germany. They settled in the town of Loerrach, which was just over the German border from Basel, and continued to run the business. Sometime in 1937 or 1938, however, the Nazi government revoked David Schwab’s permit to travel to Switzerland. At this time the Schwabs began the process of liquidating the business and applying for American visas. With the help of a relative in the U.S., the Schwabs received an affadavit and were put on a waiting list of would-be immigrants. After the Kristallnacht pogrom of November 9-10, 1938 and Gerd’s subsequent dismissal from school, the Schwabs focused all their energy on emigration. Gerd’s mother heard about a Swiss organization willing to sponsor refugee children to live in Switzerland. She submitted an application, and Gerd became one of only 300 Jewish children to be selected for the program. Gerd’s sister was not living with the family by this time. Shortly before the Schwabs moved back to Germany, she went to live at a French boarding school in Remiermont. A few years later she was able to immigrate to the U.S. Gerd left for Switzerland in March or April of 1939. He stayed first on a small family farm in Moenchaltdorf and later moved to Huetten ob Waedenswil, where he lived in the home of a florist, who was probably an adherent of the Jehovah’s Witnesses. In the spring of 1940, Gerd received word from his parents that their visas had come through and were ready to be picked up in Stuttgart. Gerd rejoined his parents in Germany, and the three secured their visas on May 10, 1940, the day Germany invaded Belgium and Holland. Barred from leaving Germany through the Low Countries, Gerd’s father applied for a transit visa at the Italian consulate. A well placed gift secured the visas, and they proceeded to Genoa. There they boarded the SS Washington bound for New York. After a period of transition, the Schwabs purchased a poultry farm in Cranberry, N.J. In May 1944 at the age of 19, Gerd was drafted into the U.S. Army. He joined the 10th Mountain Division and was sent to Italy in October of that year. At the end of the war he was transferred to an intelligence unit and assigned to the U.S. Detailed Interrogation Center (USDIC). At this facility, where high level German captives were being interrogated prior to being sent to trial, Gerd worked as a translator and interpreter. He remained at the USDIC until May 1946 when he was discharged from the army. Immediately thereafter, Gerd went to work for the International Military Tribunal (IMT) in Nuremberg. There he served as a translator and interpreter for the commission hearing evidence on the seven Nazi organizations that were under indictment by the IMT. In particular, he was involved in hearings about the German High Command and General Staff of the Wehrmacht. Gerd remained in Nuremberg until the day the IMT defendants were executed. He then moved to Berlin where he worked for the U.S. Chief of Consul responsible for trying the Subsequent Nuremberg Proceedings. Assigned the position of junior research analyst, Gerd sifted through the collection of Nazi files stored at Tempelhof airport and made abstracts of relevant documents for specific cases. His research focused on material for the Justice Trial. In May 1947 Gerd decided to return to the U.S. to pursue his higher education. He studied political science at the University of Chicago and Stanford before launching a career in the American foreign service. He was married on December 25, 1949 to Ingeborg (now Joan) Nussbaum, a German Jew from Berlin who had escaped from Germany on a Kindertransport to Great Britain shortly before the war. Both of her parents perished in the Holocaust.