False identification card issued in name of Stanislawa Wachalska, that was used by Feigele Peltel (now Vladka Meed) while serving as a courier for the Jewish underground in Warsaw. 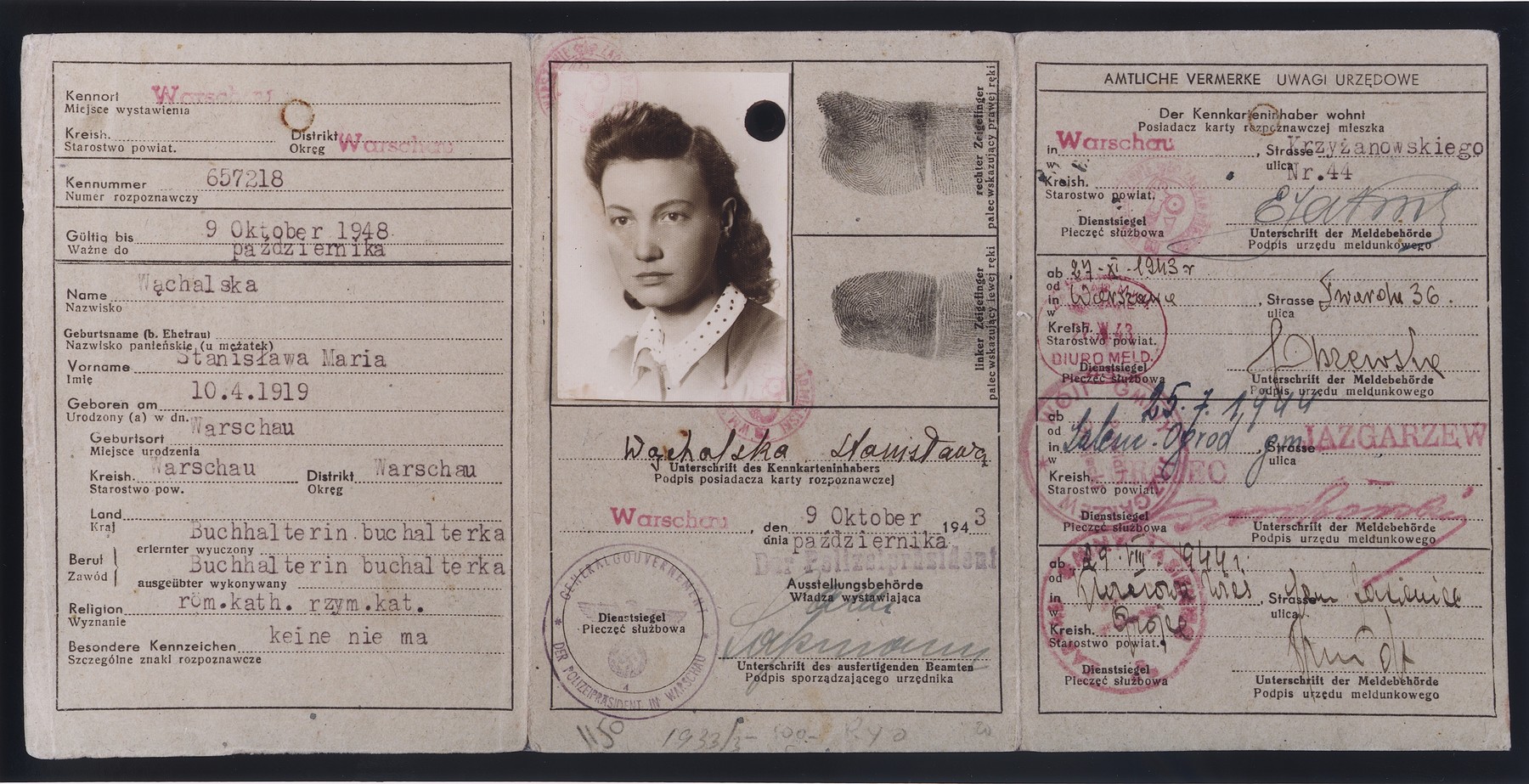 False identification card issued in name of Stanislawa Wachalska, that was used by Feigele Peltel (now Vladka Meed) while serving as a courier for the Jewish underground in Warsaw.

Biography
Vladka Meed (born Feigele Peltel) is the daughter of Shlomo and Hanna Peltel. She was born in 1921 in Warsaw, where her father worked in a leather factory and her mother ran a small haberdashery. Feigele had two younger siblings: a sister, Henia, and a brother, Chaim. Educated at secular Yiddish schools that were sponsored by the Jewish Socialist Bund, Feigele became involved at an early age in the Bund youth organizations: the Skif children's group and later, the Zukunft youth movement. During the first year of the German occupation Feigele became the chief breadwinner of her family. Taking advantage of her Polish appearance, she stood in breadlines instead of her father so that her family would not be denied the food they needed to survive, and she sold her mother's wares on the streets of the more affluent Warsaw neighborhoods to provide her family some income. In the fall of 1940 the Peltel family was forcibly relocated to a drafty one-room apartment in the newly established Warsaw ghetto. The following year, Feigele's father succumbed to pneumonia. The rest of the family struggled along for another year until the mass deportations of the summer of 1942. At that time Feigele was working in the Toebbens factory in the ghetto and living in its adjacent dormitory. After work she devoted her energies to organizing children's groups for the Bund underground. In early August 1942 Feigele's mother and brother were rounded-up and deported to Treblinka; her sister was taken a few weeks later. By this time Feigele knew that deportation meant death at a concentration camp and understood that she had now lost her entire family. She therefore decided to devote herself entirely to resistance work. In the fall of 1942 she joined the newly created Jewish Coordinating Committee (Komitet Koordynacyjny), a committee of Bundists and Zionists led by Abrasha Blum, Menachem Kirschenbaum and Yitzhak Zuckerman. Initially formed to coordinate resistance efforts with the Polish underground on the "Aryan side" of Warsaw, it soon became focused on supplying the needs of the new Jewish Fighting Organization (ZOB) in the ghetto. Because of her Polish appearance Feigele was smuggled out of the ghetto in December 1942 to work as a courier for the Coordinating Committee on the "Aryan side". Her tasks were to obtain arms for the ZOB; to find hiding places for Jewish women and children; and to assist Jews already in hiding with money, food, clothing, documentation, medical care and alternative shelters. On several occasions in the months preceding the ghetto uprising, Feigele crossed the wall to smuggle in illegal literature, correspondence and weapons and to bring out instructions for those working on the "Aryan side". During the revolt and its suppression, which she watched from the "Aryan side," Feigele worked tirelessly to find shelter for the surviving ghetto fighters. A short time later she was arrested in her room, along with Abrasha Blum, and jailed at the local precinct house. She was rescued by means of a well-placed bribe offered by her adoptive Polish mother, Anna Wachalska, but help arrived too late to save Blum, who had been turned over to the Gestapo. After her release and a period of lying low in the countryside, Feigele returned to her duties as a courier for the underground. Among her many assignments was establishing contact with Jewish partisans in the Wyszkow Forest, with prisoners in the factory labor camps of Czestochowa and Radom, and with an isolated group of Jewish insurgents from the Czestochowa ghetto hiding out in Koniecpol. To each of these groups Feigele brought desperately needed funds, news of the war and resistance, and a link to other surviving Jews. Soon after moving to the "Aryan side" Feigele became acquainted with Benjamin Miedzyrzecki, another Warsaw Jew who had facilitated her escape from the ghetto before leaving himself a short time later. Their friendship quickly blossomed into a romantic relationship that had to be kept secret from her colleagues in the Jewish underground, lest it compromise her trustworthiness in their eyes. Together Feigele and Benjamin participated in the Warsaw Uprising of August 1944 and were evacuated with the rest of the Polish population after its suppression by the Germans two months later. Both survived and were married shortly after the liberation.