Members of the X-Concentration Camp Orchestra on their bus during a concert tour. Henia Durmashkin is on the left. Her sister, Fania Durmashkin Becker is beside her. Fania's husband, Max Becker is in the back, second from the right. 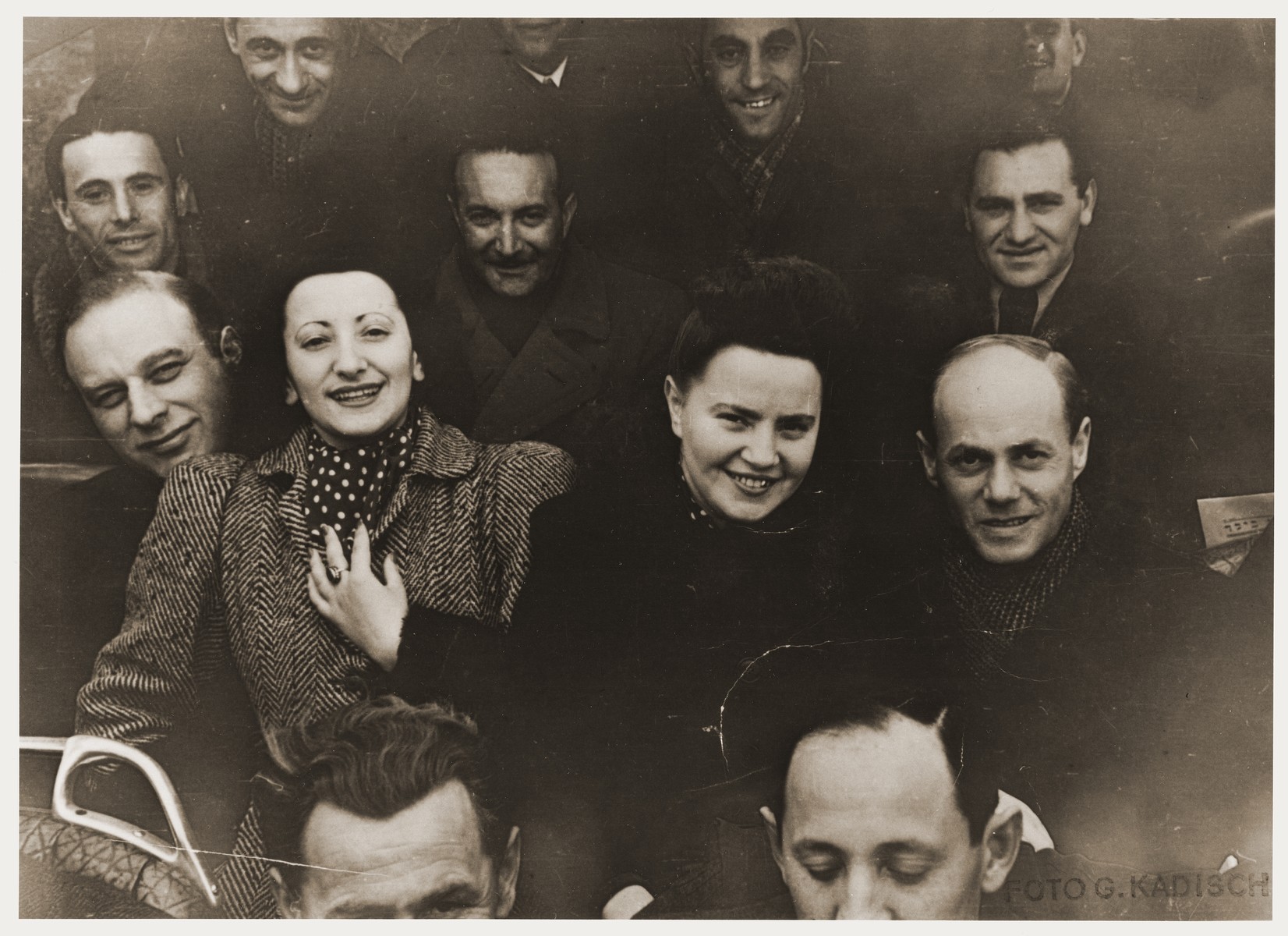 Members of the X-Concentration Camp Orchestra on their bus during a concert tour. Henia Durmashkin is on the left. Her sister, Fania Durmashkin Becker is beside her. Fania's husband, Max Becker is in the back, second from the right.

Henia Durmashkin was born in Vilna in 1926. She is the daughter of Sonia and Akiva Durmashkin, who was a highly-regarded musician, composer, and the conductor of the choir in the City Temple of Vilna. The youngest Durmashkin, Henia had a sister, Fania, a trained pianist, and a brother, Wolf, a child prodigy and later, a renowned conductor. Henia's vocal talent was discovered early. While in the second grade at the Tarbut Gymnasium, Henia performed songs for Hayyim Bialik at a program honoring his visit. The songs were Bialik's poems put to music composed by Akiva Durmashkin. Henia went on to study at the Conservatory of Music in Vilna, and in 1940, she was the only Jew accepted to the City Choir of Vilna. In the summer of 1941, Henia and her family were moved into the Vilna Ghetto, and soon after, Akiva was arrested and deported during an action. In 1942, the Hebrew Ghetto Choir of Vilna gave its first concert under the direction of Wolf Durmashkin with Henia and Fania both participating. The Vilna Ghetto was liquidated in September 1943. Sonia Durmashkin was too frail to be selected for labor. Wolf was deported to labor camps in Estonia. Henia and Fania were sent to Riga, and for the next two years, to a number of other labor camps. In one camp, Henia met Abrasha Stupel, a violinist. Henia and Fania were liberated on a death march from Dachau, May 1, 1945, by the U.S. Army. Soon after, Henia was invited by Abrasha Stupel to join a group of musicians gathered at St. Ottilien DP Hospital. They called themselves the "St. Ottilien Orchestra," the "X-Concentration Camp Orchestra," and finally the "Representative Orchestra of the She'erit Ha-Peletah." In 1946, the orchestra relocated from St. Ottilien to Fuerstenfeldbruck. They were employed by the JDC, UNRRA, and IRO to play at DP camps throughout the U.S. and British zones of Germany. During her travels, Henia learned that her beloved brother, Wolf Durmashkin, had been killed along with other inmates of Klooga, one hour before the liberation of the camp. In 1948, Leonard Bernstein traveled to Germany to conduct the Munich Symphony Orchestra. In May, in a Munich theatre, he accompanied Henia for two Hebrew songs. Henia Durmashkin immigrated to the United States, where she and her sister, Fania, continued to perform.