Children in youth movement uniform stand on the steps of the Rothschild Hospital to greet the delegation from the United Nations Special Commission on Palestine. 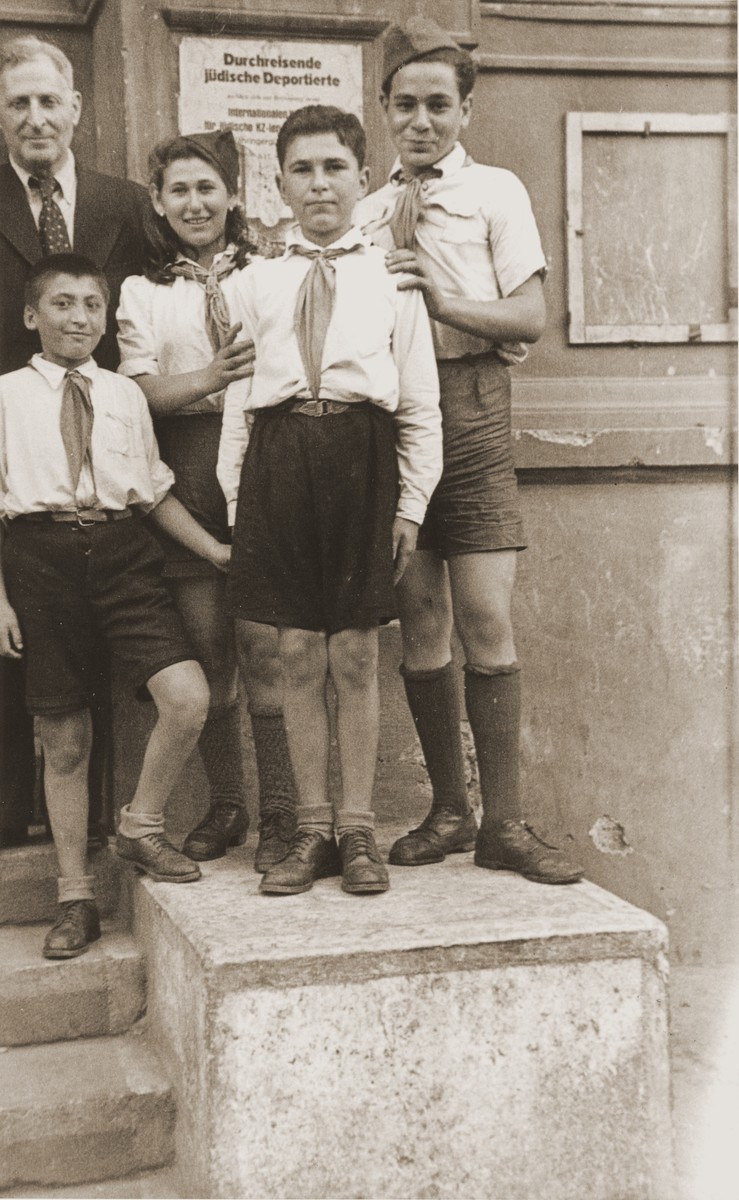 Children in youth movement uniform stand on the steps of the Rothschild Hospital to greet the delegation from the United Nations Special Commission on Palestine.

Event History
UNSCOP, the United Nations Special Committee on Palestine, was established in April 1947 to investigate the cause of the conflict in Palestine and to devise a solution. It arose in response to the declared intention of the British to abandon the Mandate and turn over the question of the future of Palestine to the United Nations. The committee consisted of eleven members representing the governments of Australia, Canada, Czechoslovakia, Guatemala, India, Iran, The Netherlands, Peru, Sweden, Uruguay and Yugoslavia. The Arabs in Palestine and the Arab Higher Committee refused to cooperate with UNSCOP, demanding that the UN immediately grant Palestine its independence. UNSCOP performed its investigations in a two and half month period between June 15 and August 31, 1947. Its itinerary included visits to Palestine (June 15-July 20), Lebanon, Syria and Trans-Jordan (July 21-25), and to numerous Jewish displaced persons camps in Germany and Austria (August 8-14). Among the DP camps the committee toured were: Kloster Indersdorf, Landsberg, Bad Reichenhall, Rothschild Hospital (Vienna), Schlachtensee, Bergen-Belsen, Foehrenwald, Ainring, Neu Freimann and the Franz Josef Kaserne (Salzburg). The committee worked on its report in Geneva from July 28 to August 31, 1947. It was formally submitted and published on September 1. In its report the majority (7 members) endorsed the partitioning of Palestine into independent Jewish and Arab states with an internationalized Jerusalem, all three linked in an economic union. The minority (3 members) favored a federal, unitary state with Jerusalem as its capital. The partition plan was subsequently approved by the UN General Assembly on November 29, 1947 in Lake Success, New York.

[Sources: MidEastWeb Historical Documents. "Report of UNSCOP 1947"
Biography
George (originally Hirsch) Birman was born in 1922 in the German city of Konigsberg and grew up near the Baltic port of Klaipeda, in Lithuania. His father, Abel Birman, gave him a Voigtlander camera as a present for his tenth birthday, which he used to document pre-war, wartime and postwar Jewish life in Europe. In 1941 Hirsch was relocated to the Kovno ghetto. From there, he was sent to a number of labor camps in the area. He managed throughout his incarceration to keep his camera and photographs with him. On the night of July 9, 1944, before escaping from the Kedainiai labor camp near Kovno, Hirsch handed over his passport, birth certificate and approximately 150 photographs and negatives to his father, who was then working as the camp cook. Abel wrapped the documents and photographs in waxed paper and buried them in a canister under the kitchen. Using a pair of pliers, Hirsch cut a hole in the barbed wire fence surrounding the camp and escaped, along with his father and another companion. The three crawled through a drainage ditch and hid in a rye field before fleeing to the forest. One month later, after the German retreat, Hirsch returned to Kedainiai and dug up his photographs, which he found undamaged. He then proceeded to photograph the former labor camp. Hirsch eventually settled in Vienna, where he studied engineering and worked for the Bricha, the underground Zionist organization that assisted Jewish DPs in migrating to the West and immigrating to Palestine. He lived off and on at the Rothschild Hospital for four years registering DPs while his father helped in the management of the camp's supplies. In 1952 Hirsch immigrated to the United States.