Friedel Reiter and August Bohny pose with a group of children in front of the Secours Suisse barracks in the Rivesaltes internment camp. 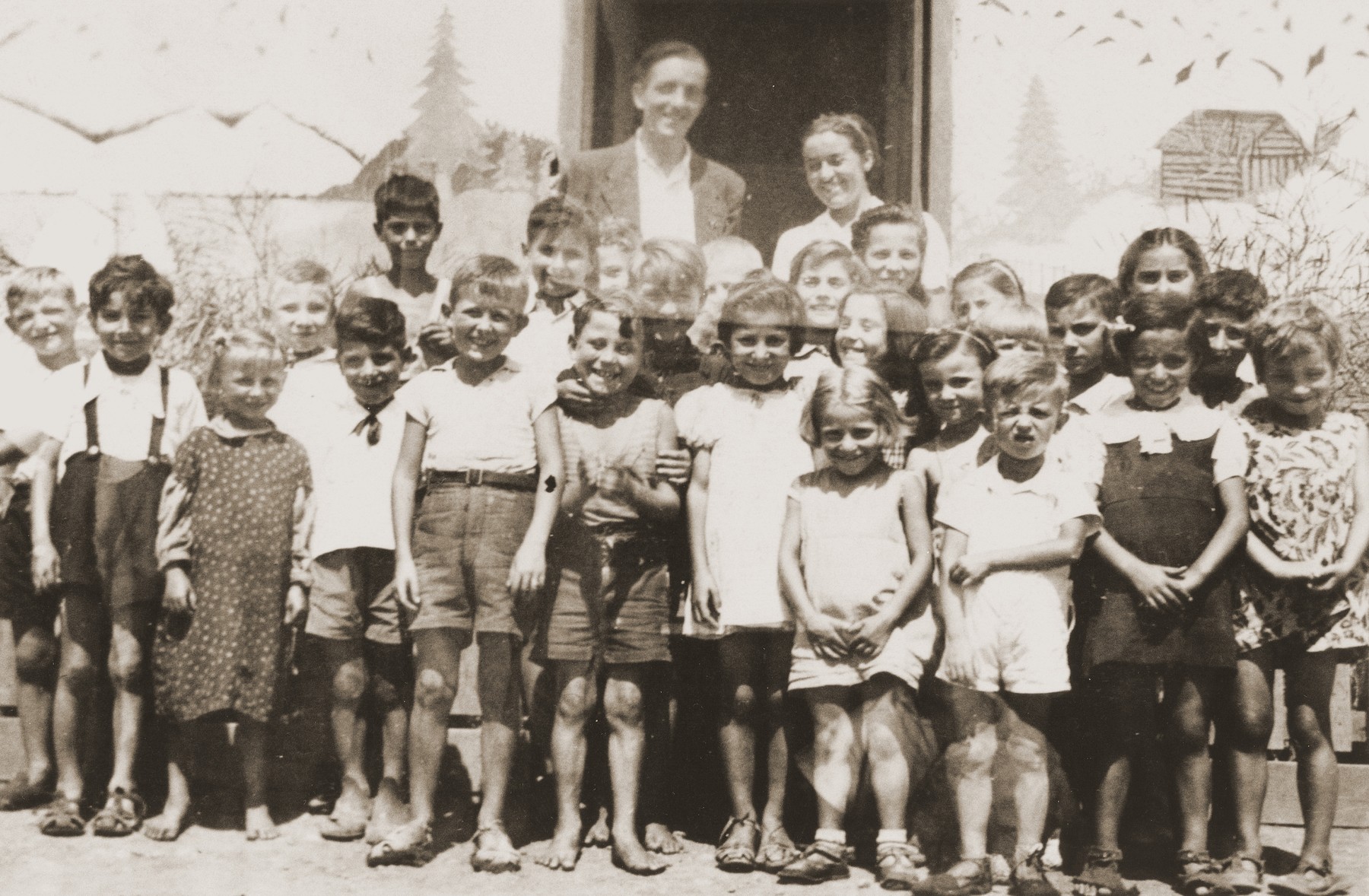 Friedel Reiter and August Bohny pose with a group of children in front of the Secours Suisse barracks in the Rivesaltes internment camp.

The building is decorated with a mural of the Swiss Alps.

Rivesaltes was divided into ten sub-camps, each fenced in by barbed wire. Men, women and children were housed separately. Only Roma (Gypsies) were allowed to live in family units. Internees suffered from malnutrition, disease from surrounding swamps, and exposure to heat and cold. Rivesaltes ceased functioning as an internment camp in November 1942, following the deportation of most of the Jewish prisoners to Auschwitz (via Drancy), and the transfer of the Gypsies to other camps. After the liberation of France, Rivesaltes was used as a POW camp for captured Germans.
https://encyclopedia.ushmm.org/content/en/article/france.
Biography
Friedel Reiter (later Bohny-Reiter, 1912-2001), worked as a nurse working for the Secours Suisse aux enfants and helped rescue Jewish children interned in the French internment camp of Rivesaltes during World War II. Born in Vienna, Reiter was orphaned during World War I. At the end of the war she came to Switzerland on a Red Cross orphans transport. When she reached adulthood, Reiter trained as a pediatric nurse in Zurich. In 1941 she joined the Secours Suisse aux enfants (Swiss Aid to Children), an organization founded to care for children displaced during the Spanish Civil War under the auspices of the Swiss Red Cross (CRS). On November 12, 1941 Reiter was sent by the Secours Suisse to the Rivesaltes internment camp in the unoccupied zone of France. There, she did her best with meager resources to provide medical care, clothing and food for the interned Jewish, Gypsy and Spanish children. As the situation in the camp deteriorated in the spring of 1942, Reiter realized the necessity of removing as many of the children as possible. In her effort to find institutions in France that would shelter them, she met with August Bohny, who since October 1941 had been running the L'Abric children's home (sponsored by the Secours Suisses) in the village of Le Chambon-sur-Lignon. In April 1942 Bohny was asked to convert an old castle, known as the Chateau de Montluel, near Lyon, into a home for children released from Rivesaltes. When Reiter brought the first group of children to Montluel, she met Bohny for the first time. He later became her husband. When he returned to Le Chambon a short time later, Reiter began funneling groups of children to him. In response to the increased need for institutions to shelter refugees, Bohny established another Secours Suisse children's home, the Faïdoli, in the fall of 1942 and a separate furniture making workshop [Atelier Cevenol] The following spring he also set up an agricultural training school for refugees [ferme école]. In January 1943 Friedel was sent to Le Chambon-sur-Lignon to work as a director of an orphanage with August Bohny. The couple lived there until the end of 1944. Together Friedel Reiter and August Bohny saved hundreds of lives. In 1990 both were recognized by Yad Vashem as Righteous Among the Nations. Reiter recorded her experiences at Rivesaltes in a wartime diary that was published only in 1993. Four years later, the journal became the subject of a documentary film by Swiss filmmaker Jacqueline Veuve (Switzerland 1997).