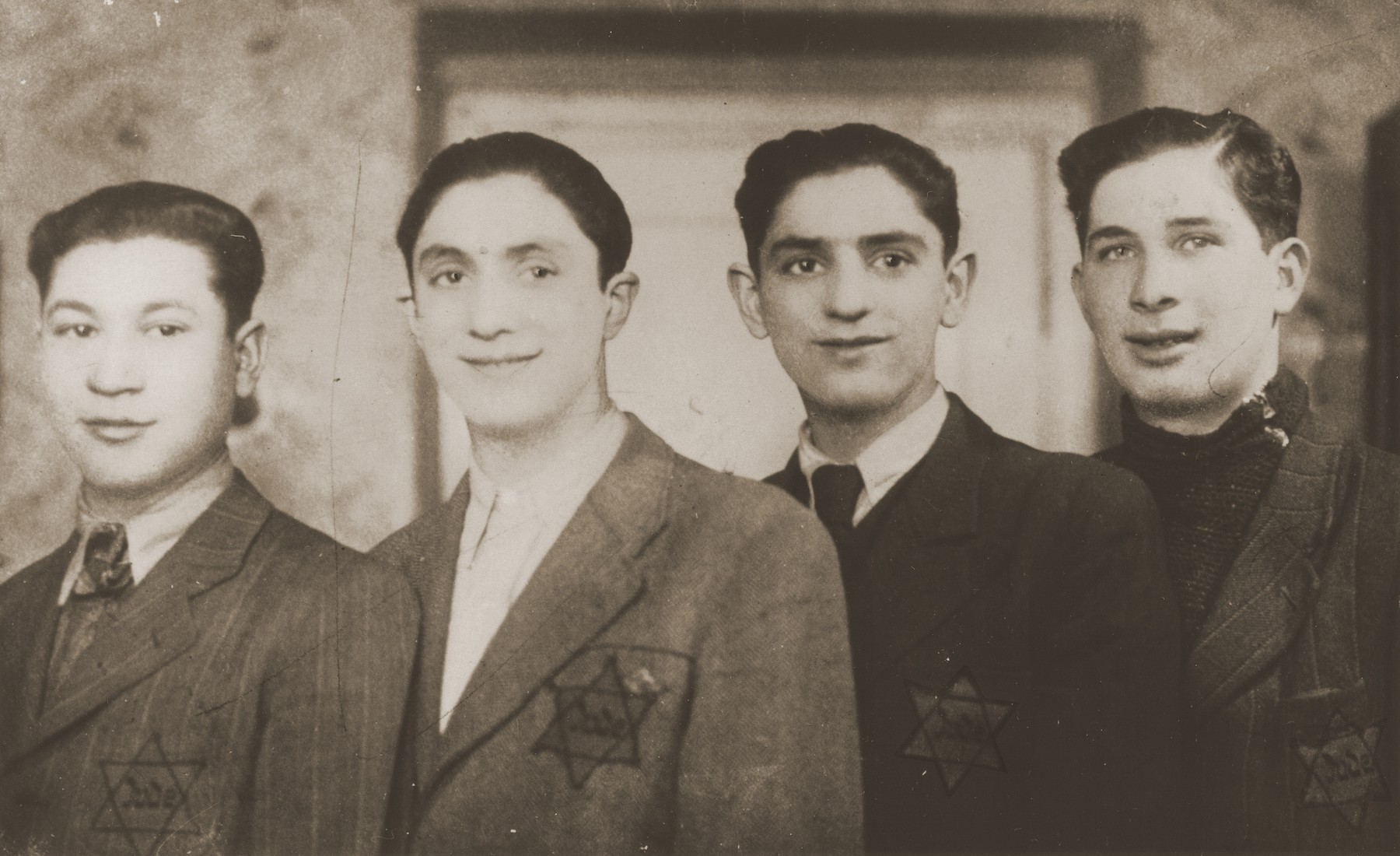 Pictured are David and Aaron Jakobowicz (center) with two friends.

https://encyclopedia.ushmm.org/content/en/article/german-administration-of-poland. https://encyclopedia.ushmm.org/content/en/article/ghettos-in-poland.
Biography
Eva Tuchsznajder is the daughter of Zacharia and Esther (Erlich) Tuchsznajder, who had emigrated to Belgium from Poland in 1927. She was born July 23, 1930 in Brussels, where her father earned his living as a leather manufacturer. Eva had four siblings: Sarah (b.1924), Michael (b.1922), Rivka (b.1935) and Malka (b.1936). In 1940, following the German invasion of Belgium, the Tuchsznajders fled to France by train. For a time they found refuge in the town of Moulins-Hautes in southern France, but soon were interned by the French in the Agde camp. After a fire destroyed part of the internment camp, the Tuchsznajders were transferred to Rivesaltes, where conditions were much worse. Eva and Rivka were later released from the camp with a group of children who were given permission to move to OSE [Oeuvre de secours aux enfants] homes elsewhere in France. The group was taken first to St. Jean de Vedas, then to Palavas-les-Flots, and then back to St. Jean. From here they were transferred to the children's home in Izieu. Eva and Rivka, however, left the group at this time and were taken (at the request of their father) to a home for orthodox girls at Le Couret. This request saved them from the fate of the children of Izieu, who were arrested in 1944 on orders from Klaus Barbie and sent to their death in Auschwitz. In 1943 the OSE went underground and began dispersing Jewish children to convents and homes around France. Eva and Rivka were given the aliases of Yvonne and Raymonde Drapier and sent to the children's home at Les Basses-Fontaines, where only the director knew their true identity. The girls were told to talk as little as possible among themselves and not to call attention to themselves in class. Following a police raid on the home, the girls were temporarily moved to a new hiding place, at Le Coudray, until it was safe to return to Les Basses-Fontaines. Eva was liberated at the age of fourteen on June 6, 1944. Soon after, she met up with her brother Michael, who had joined the Maquis and taken part in the liberation of Dijon and Nancy. Eva's youngest sister, Malka, also survived in hiding. Her parents and older sister Sarah, however, perished in Auschwitz after being deported from Drancy. After the war, Eva lived for a time in the children's home in Sevres (near Paris), before joining a Youth Aliyah group and immigrating to Palestine. She left France in September 1945, sailing aboard the legal immigration ship, the Mataroa. In 1951 Eva married Aaron Jakobowicz, a survivor of Auschwitz and Buchenwald from Sosnowiec. Like Eva, Aaron came to Palestine in September 1945 on board the Mataroa. His father, Hershel Zvi Jakobowicz, brother David, and sisters Salah and Hanna immigrated with him. His mother, Judith, and sister, Rivka, perished in Auschwitz.