Gathering of Polish Jewish refugees at the "Internat" Betar youth hostel in Vilna. 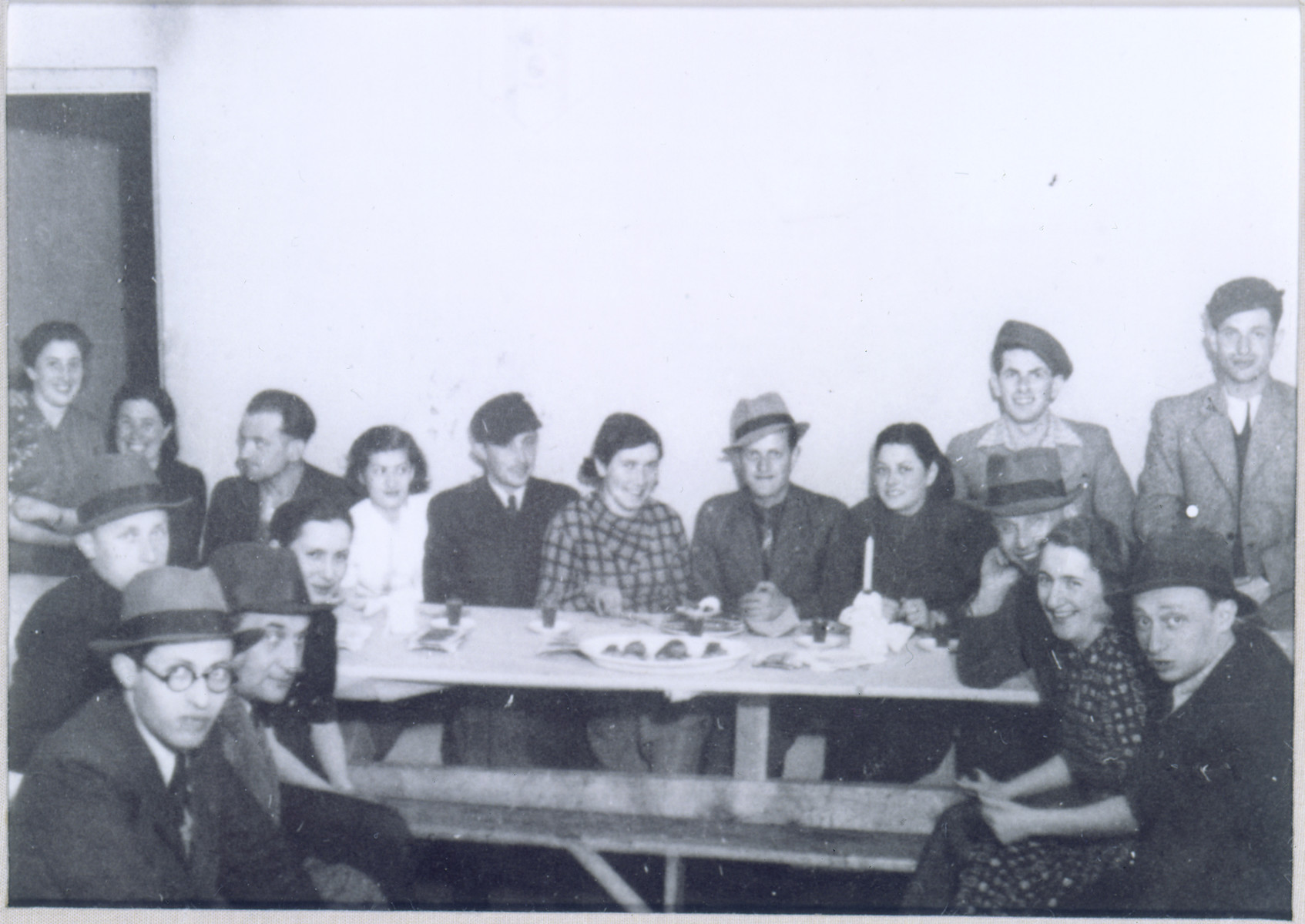 Gathering of Polish Jewish refugees at the "Internat" Betar youth hostel in Vilna.

Among those pictured are Menahem Begin (at the front left); Fejga Szepsenwol (top left); and Chaya Szepsenwol (third from the right, behind the candle). Pictured on the right are probably Batya and Israel Scheib (Eldad), future leader of the Lechi.

The Internat was one of a series of communal residences established by the American Jewish Joint Distribution Committee to help deal with the housing crisis that resulted when thousands of Polish Jewish refugees flooded into Vilna in the months following the outbreak of WWII. The JDC grouped the refugees (who were largely unaccompanied youth) in residences according to youth movement affiliation.

Biography
Lucile Camhi (born Chaya Szepsenwol) is the daughter of Leibel and Rikla Szepsenwol. She was born on March 25, 1924 in Volozhin, Poland where her parents owned a jewelry store. She had two older sisters. The oldest died as a young child before Chaya was born; the second was Fejga (b. January 10, 1923). Chaya's parents had attempted to immigrate to the United States in 1922, but were denied entry when Leibel was diagnosed with tuberculosis upon his arrival in New York. The family then tried to sneak into the U.S. by way of Canada but were caught and detained on Ellis Island. During this period the oldest sister died of diptheria. Chaya's parents then returned to Volozhin, where Fejga was born the following winter. In 1924, three months before Chaya's birth, Leibel died of tuberculosis. Chaya's mother then took over the business. All the Szepsenwols were active in the revisionist Zionist movement. Chaya's mother attended national congresses in Warsaw and hosted visiting Zionist dignitaries in Volozhin, including Menachem Begin, then leader of the Revisionists in Poland, who became a family friend. In 1936-7 Rikla applied for American visas for her daughters (She had five siblings who were already living in the U.S.). Rikla was anxious to move the girls to America before they reached high school age because there was no suitable high school in Volozhin and she could not afford to send them to Vilna. It was also quicker to get visas for minors with relatives in the U.S. than it was for entire families seeking to immigrate. The family strategized that once the girls reached America they could apply to bring their mother over under the family reunification provision. In June 1939 the Szepsenwols received a letter from Washington informing them that the visas had been issued and could be picked up in Warsaw in November. The war, however, intervened. After the Soviets took control of Volozhin in September 1939, the Szepsenwol girls fled to Vilna, fearing persecution for their Zionist involvement. There they stayed in a Betar [revisionist Zionist youth] hostel funded by the JDC. Initially, Rikla stayed behind to run the business, but when the situation deteriorated and the border with Lithuania was closed, Rikla sold the jewelry store and smuggled herself into Lithuania, arriving in Vilna in the winter of 1940. At this time the girls learned that their American visas had been sent from Warsaw to Berlin. They also heard about the availability of visas from the Japanese consul in Kaunas. They informed their American relatives who arranged to have their visas sent to Tokyo. In the meantime the girls applied for a Japanese visa. It took them three separate trips before they got in to see the Japanese consul, Chiune Sugihara. The Szepsenwols received their joint visa on August 12 and left Vilna in September with tickets for the trans-Siberian railroad in hand, paid for by their uncles. A few days after reaching Kobe, they were escorted to Tokyo by members of the Jewish community of Kobe in order to be present when their visas arrived at the American embassy. After waiting three weeks their papers came and they departed for the U.S. aboard the USS President Coolidge, which sailed from Yokohama to San Francisco, arriving on November 22, 1940. Some months later, their mother made it to Japan on a different type of visa. Rikla lived in Kobe for a short time before moving on to Shanghai. There, she secured American papers under the family reunification provision. Her relatives booked passage for her on the USS President Pierce, which sailed from Manila. It was one of the last ships to leave the Far East before the U.S. entered the war. After traveling by boat from Shanghai to the Philippines, Rikla departed for the U.S. on December 6, 1941. The ship sailed in a convoy, which took three weeks to cross the Pacific. After arriving in San Francisco on Christmas Day, 1941, Rikla joined her daughters in New York.