Rabbi Lifszyc (left) and another man pose in front of a cabinet full of Torah scrolls that were smuggled out of Suwalki. 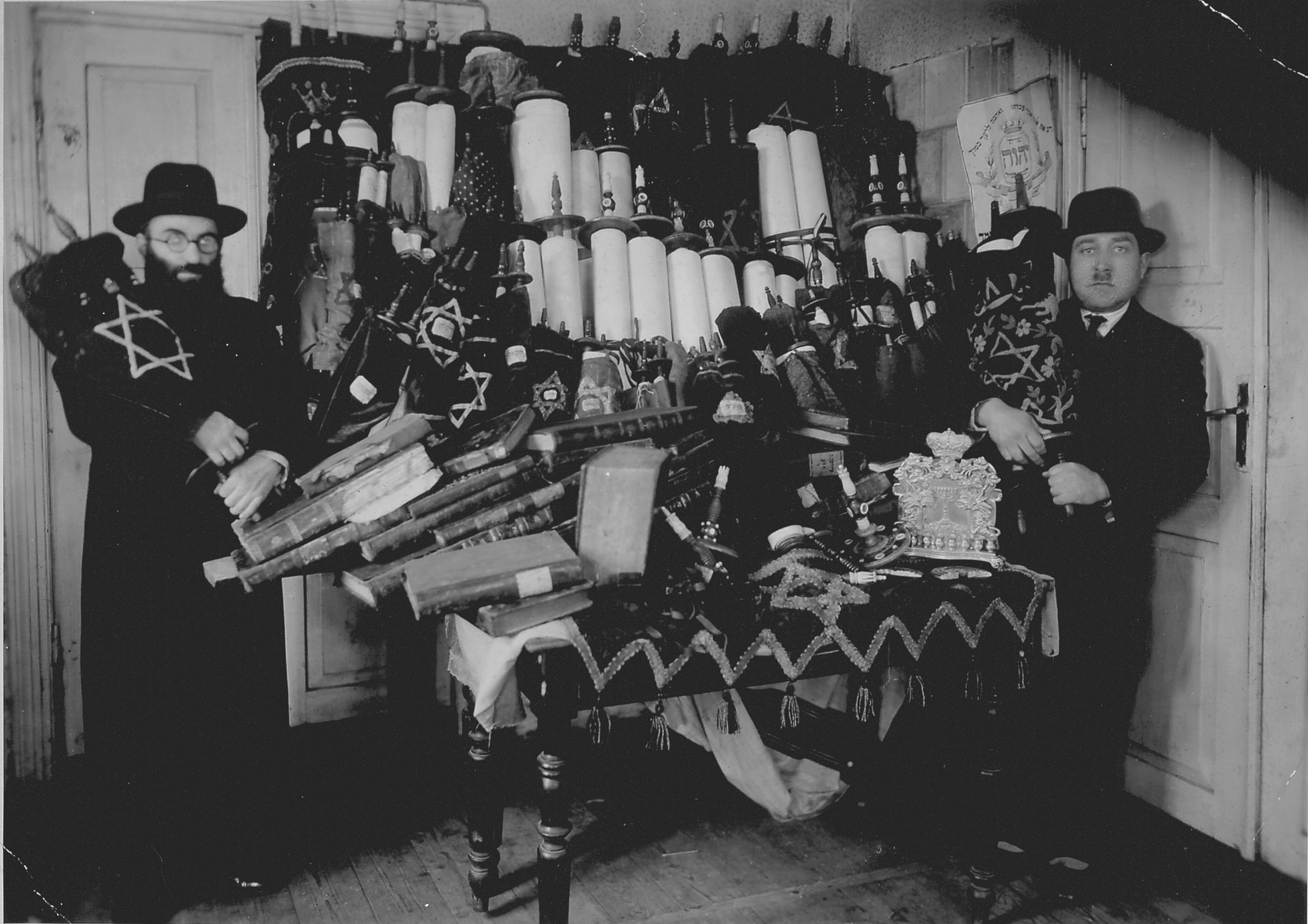 Rabbi Lifszyc (left) and another man pose in front of a cabinet full of Torah scrolls that were smuggled out of Suwalki.

Sixty scrolls and other holy items were rescued from hiding places in Suwalki, which had been occupied by Germany, and were taken to the synagogue in Kalvarija for safety. While Lifszyc was in Vilnius, he tried to save the Torah scrolls from the Russian occupiers, but had to flee Vilnius and leave these behind.

Biography
David Lifshitz (born David Lifszyc) was born in Minsk between 1906 and 1909 to Yaakov and Itel Lifszyc. He had four sisters, three of whom immigrated to Palestine before the war, and three brothers, two of whom went to Russia. His wife, Cipa Joselevitz was born on November 30, 1906 in Zasliai, Lithuania. David served as a rabbi for the city of Sulwalki from 1935 through 1939, and at the start of World War II, he and Cipa had two daughters, a seven-month-old infant, Avivit Rashel, and a five-year-old girl, Shulamit. After Suwalki fell under German occupation in 1939, Gestapo agents ordered Rabbi Lifszyc to end kosher slaughter and close synagogues and schools. Rabbi Lifszyc and other communal leaders hid the town's Torah scrolls fearing possible confiscation. In November 1939, Germans commanded that all Jews leave the city. Many fled, especially to Kalvarija, a nearby Lithuanian town; the rest were later deported. On November 1939, Rabbi Lifszyc, who felt obligated to remain behind, sent his wife, mother-in-law and daughters in a horse and wagon. Cipa's mother, Sara Rivka Joselevitz, was arrested, Shulamit became separated from the rest of the family, and the infant died en route. Cipa returned to Sulwaki to bury the baby, and after a few days, her mother also returned. The rabbi was strongly urged to flee to search for Shulamit. David arrived in Kalvarija ahead of Cipa who was arrested en route but eventually was released. As soon as they arrived, they found Shulamit who had made her way to Kalvarija. After their successful escape, David helped rescue Jews remaining in Suwalki and transport sixty Torah scrolls to Kalvarija. From Kalvarija, the Lifszyc family went to live in Slobodka, on the outskirts of Kovno. Following the Soviet occupation of Lithuania, they began to search for ways to leave the country. David obtained a Curacao visa from the Dutch consulate dated July 27, 1940. He also obtained an American visa because he was included on a list of distinguished rabbis submitted to the State Department by the Agudat Israel of America. In addition, he was granted permission to immigrate to Palestine but technicalities prevented him from going there. After obtaining Soviet exit visas, the Lifszycs purchased tickets for Vladivostok on February 5, 1941. They started for Moscow, where they received Japanese transit visas in March of 194, as well as an extension on their Palestine visa from the British Consulate in Moscow dated March 21, 1941. The latter allowed him to apply at the British Consulate in Kovno for a visa to Palestine by August 16, 1940. Although they tried to get the necessary visas for Cipa's mother to leave Kovno and join them, they were unsuccessful. She was shot in a killing action not far from Kovno in October 1941. The family travelled across Russia and on May 15, 1941, sailed from Kobe to San Francisco aboard the Tatuta Maru. They later had two more daughters, Chaya and Sara Itel, born in the United States. David's parents, Yaakov and Itel Lifszyc, his sister Miriam and brother Abraham and his wife Lena and two children were later deported from the Grodno ghetto and killed at Treblinka. Most of Cipa's family was also killed during the Holocaust.