Friends and family pose with the bride and groom at a wedding celebration in the Bergen-Belsen displaced persons camp. 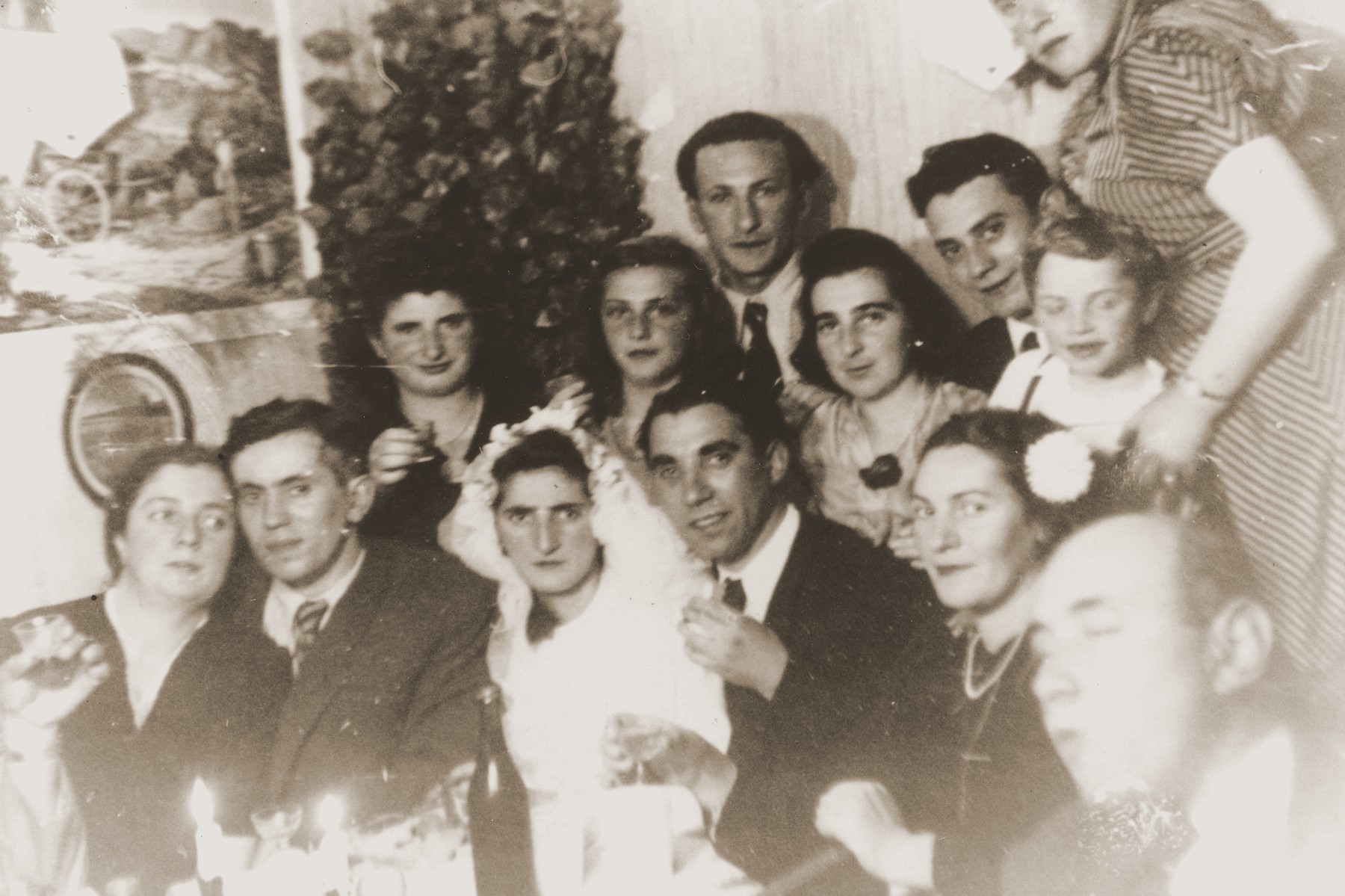 Friends and family pose with the bride and groom at a wedding celebration in the Bergen-Belsen displaced persons camp.

Pictured are the bride and groom Manya (Goldblum) and David Marmor

Biography
Sally Wasserman (born Salusia Goldblum) is the daughter of Izak and Tola (Broda) Goldblum. She was born January 23, 1935 in Katowice, Poland, where her father was a kosher butcher. Salusia had one younger brother Wolf (b. 1937). In September 1939 the family moved to Dabrowa where they were incarcerated in the ghetto. During the winter of 1941, her father Izak was sent to a labor camp and from there transferred to Treblinka, where he worked in a Sonderkommando alongside his brother-in-law, Moszek Broda. In 1942 or 1943 Moszek was instructed to accompany a train carrying the confiscated possessions of prisoners to Majdanek. Not wanting to be separated from Izak, he smuggled him aboard. After a brief period in Majdanek the two men were transferred to Auschwitz. Izak, however, soon contracted typhus and died. Moszek was evacuated from Auschwitz to Germany in January 1945 and was liberated in Bergen-Belsen in April. After her father's deportation, Salusia remained in the Dabrowa ghetto with her mother and brother. During this period Salusia met Mikolei Turkin, a public school teacher who was officially classified as a second-generation Volksdeutsch. He was assigned work as an electrical meter reader in the ghetto. He took a liking to the little girl and brought her food. After Salusia introduced him to her mother, Turkin started to bring her news of the outside, gleaned from BBC broadcasts. He also warned her of impending actions in the ghetto. Eventually Turkin offered to hide Salusia if the need arose. In preparation for that eventuality, Turkin put her through a few drills, lest she had to be removed from the ghetto in a hurry. During the last week of July 1943 the liquidation of the ghetto began. On the eve of her deportation, Tola arranged for Turkin to take Salusia. She also prepared a letter to be sent to her sister Ange (Broda) Kraicer in Toronto and a packet of family photos for her daughter to remember them by. Salusia's mother and brother were deported to their death in Auschwitz-Birkenau in early August. Salusia remained with the Turkins until May 1945. Following the liberation the Turkins were persecuted by fellow Poles and denied ration cards. They made contact with a group of returning Jews and told them they were hiding a Jewish child, but had no food to sustain her. The group agreed to share their rations if the Turkins would relinquish Salusia. The survivors then placed Salusia in a Jewish orphanage in Gleiwitz. The Turkins, wanting to be near the child, moved to Gleiwitz. They also contacted Salusia's relatives in Canada. Surviving friends of her parents found her in Gleiwitz and took her with them to Sosnowiec, but Salusia ran away to be with the Turkins. In March 1946, Moszek Broda came to Gleiwitz to find Salusia. She was still unwilling to leave the Turkins, but after three weeks agreed to accompany her uncle to the Bergen-Belsen displaced persons camp. From Belsen she joined a special transport of war orphans who were given permission to immigrate to the U.S. She sailed to New York on board the SS Ernie Pyle on January 16, 1947. Eleven-year-old Salusia was initially placed in an orphanage in Brooklyn, NY, but shortly after her arrival her aunt, Ange (Broda) Kraicer, came from Toronto and smuggled her into Canada. Salusia remained with her aunt's family in Toronto for the remainder of her youth.
Manya Marmore (born Manya Goldblum) is the sister of Izak and Edek Goldblum. In 1941-1942 she was taken from the Dabrowa Gornica ghetto to the Gruenberg labor camp in Silesia, and later was deported from there to Auschwitz. She remained in Auschwitz until the camp was evacuated in January 1945. Manya was then sent on a forced march to Germany and ended up in the Bergen-Belsen concentration camp, where she was liberated in May. At Bergen-Belsen she met up with her brother Edek and brother-in-law Moishe Broda. After the war she lived in the Bergen-Belsen displaced persons camp. There she met David Marmor, and the two were married in October 1946.