Young mothers take their babies for a stroll in the Landsberg DP camp. 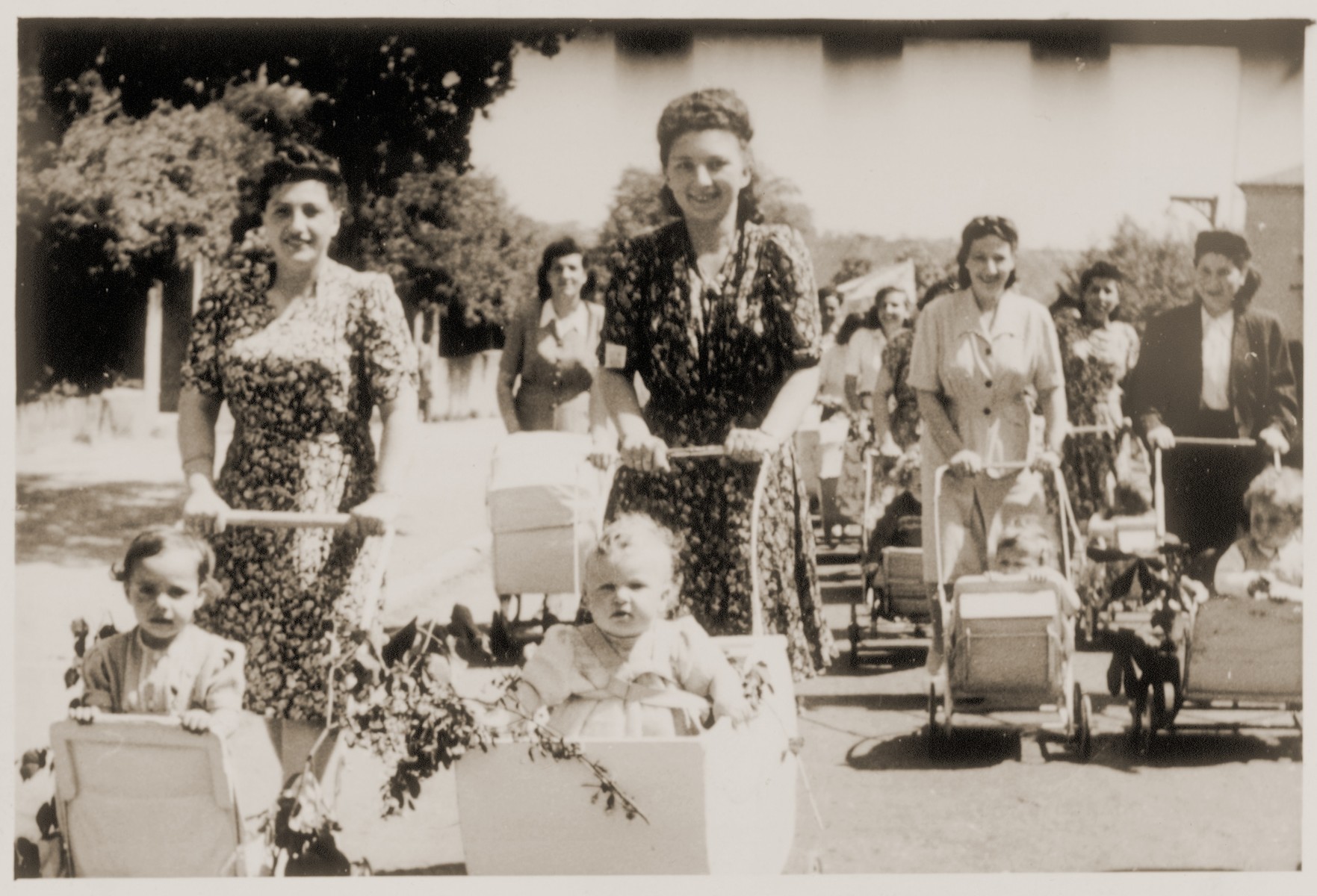 Young mothers take their babies for a stroll in the Landsberg DP camp.

Dorit Mandelbaum is pictured in the baby carriage on the left. Her mother, Anka, is pushing the carriage. Chava Oppenheim pushes her son Aviezer in the carriage, third from the right. Also pictured is Laja Minc.

Biography
Dorit Mandelbaum is the only daughter of Jakub Mandelbaum and Anka Aleksandrowicz Mandelbaum. She was born on June 2, 1946, in the Landsberg am Lech DP camp in Germany. Jakub Mandelbaum was born on March 2, 1914, in Kozienice to Izak and Dora Mandelbaum. He studied in a commerce school and later became a dental technician. In 1935 he became a sales clerk in a radio shop. Jakub met his future wife Anka Chana Aleksandrowicz during her stay in Kozienice while visiting her sister Roza. Anka was born on June 6, 1918, in Warsaw to Hena and Szlomo Aleksandrowicz. In 1940 Anka and her family were forced into the Warsaw ghetto. Jakub made a special trip to Warsaw to convince Anka to flee. In 1941she escaped the Warsaw ghetto only to be arrested and put in the Gestapo prison. However, she managed to jump out of the prison bathroom window and flee. On the last leg of the long walk to Kozienice, Anka met an elderly Pole who pretended to be her father and helped her to board a boat crossing the Vistula River to Kozienice. Soon after her arrival, she and Jakub married. In 1942 Jakub was sent to a forced labor camp in Wolanow, near Radom, where some one thousand Jewish prisoners worked on an airfield. In August 1943 he was transferred to the Blizin forced labor camp near Konskie, where he worked in carpentry and posed as a Pole. In July 1944 Jakub was taken to the Goleszow forced labor camp, a sub-camp of Auschwitz III-Monowitz, and employed by Steinbruch. In January 1945 he was transferred to the Mauthausen concentration camp where he was in a "Straffe Kommando" (Punishment Commando). On May 5, 1945, the American army liberated the camp, and Jakub Mandelbaum rushed back to Kozienice to search for his family. During the years of his imprisonment, Jakub hid his family photographs in his shoe. Anka Mandelbaum was deported from the Kozienice ghetto to Auschwitz-Birkenau. She worked in the "Union" ammunition factory until its liberation in January 1945. Jakub's father, Izak Mandelbaum, survived the Auschwitz-Birkenau camp, where he worked as a barber. All other family members perished. After the war, Jakub and Anka Mandelbaum left Poland for Germany. They spent five years in the Landsberg am Lech DP camp before immigrating to Israel in 1950.