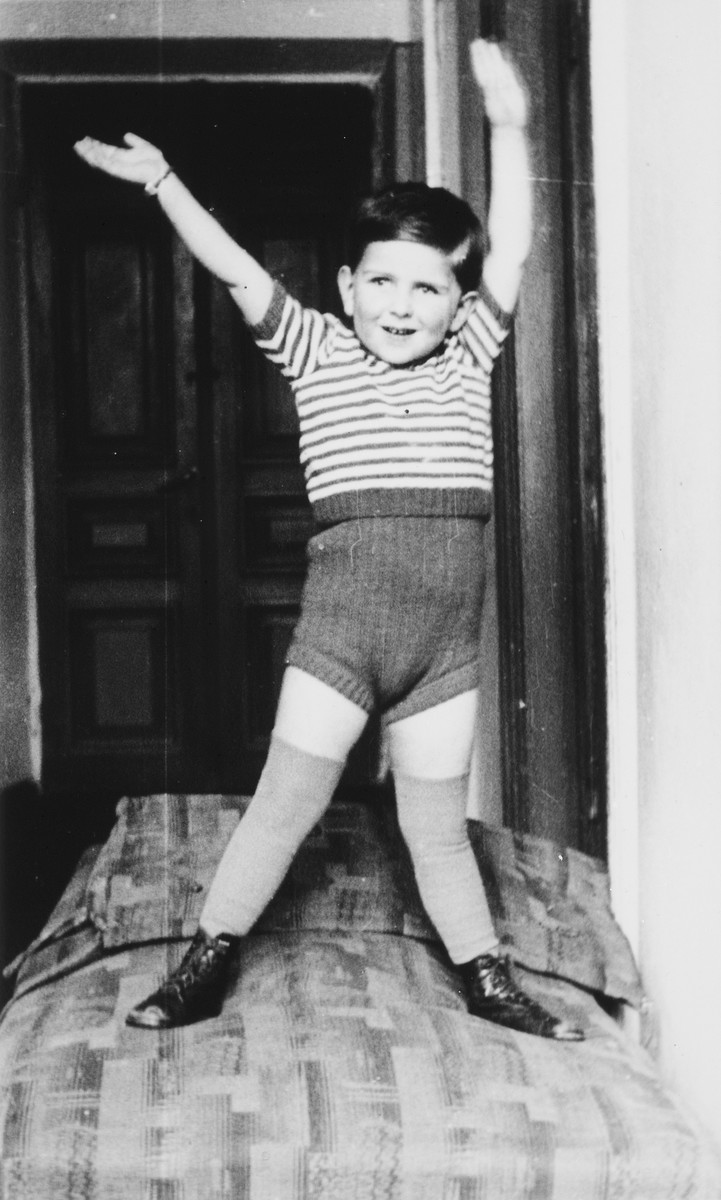 Biography
Wanda Mosewicki Glass was born in Warsaw in 1912 to Helena and Ekusiel Mosewicki. In 1934, she married Marian (later Martin) Glass, the son of Jakob and Stephanie Glass. Jakob was a wealthy banker, and Marian graduated from Warsaw law school with the intent of practicing law. However, Polish legislation enacted at the time barred him from practicing, and he found work as a legal assistant. Marian and Wanda's son Andrzej was born in 1935. The family had substantial securities and money invested in several overseas banks, but in March 1939 the Polish government demanded that Polish citizens recall all their liquid assets from abroad. The Glasses followed this directive, so that when the war broke out they had no foreign deposits to draw upon. After the German invasion of Poland, Marian sent Wanda and Andrzej along with other relatives, out of Warsaw to a hotel in the nearby town of Srodborow. A few days later, a cousin of Marian came to the hotel and recommended that everyone return to Warsaw to decide what next to do. On September 7, Marian went to help dig trenches for the army and met a Polish taxi driver who agreed to take both of their families east. Marian, Wanda, Andrzej, Helena and Wanda's brother Anatol boarded the taxi and headed east with very few possessions. Marian's parents left separately, and his sister and her husband went to Lvov. The taxi went as far as Pinsk before it ran out of gas. The family then hired villagers to take them east by horse and cart. Wanda, Andrzej and Helena stopped in Sarny near the border, and Marian and Anatol continued on to Vilna to get winter clothing from relatives who owned a textile mill. They learned that Vilna had become part of independent Lithuania and sought to bring the rest of the family there. For the next year the family lived in Vilna supported by relatives, bartering, and community soup kitchens. After the Soviet take-over of Lithuania in June 1940, the family again decided to flee. After being rejected for Italian visas, they heard that it was possible to receive visas through Japan to Curacao. They received Sugihara visas on July 29, 1940 and Soviet exit visas in November. They sold a diamond ring belonging to Wanda's uncle in order to purchase tickets for the voyage and left Moscow in February 1941. In Japan, Marian received visas to the Dominican Republic, and he was granted a 30-day U.S. transit visas on strength of the Dominican visas. The family left Japan in March 1941 on the Kamakura Mauru and arrived in San Francisco in April. They went by rail to New York where they stayed for the duration of the war as illegal immigrants. Though Wanda's immediate family escaped, much of her extended family was lost including her 105 year-old grandmother, Perla Mosewicka who was shot by Germans while delivering food to poor, sick Jews in the town of Nieswiez near the Polish border on July 23, 1943. Also killed were Marian's parents, and older sister. Two other sisters, Gynia and Helena, survived the war, having been deported to German slave labor camps.