An open page of a guest book belonging to the Ledermann family which includes the signatures of Otto, Edith, and Margot Frank. The page is dated May 17, 1942 and records attendance at a chamber music concert in the Ledermann home in Amsterdam. 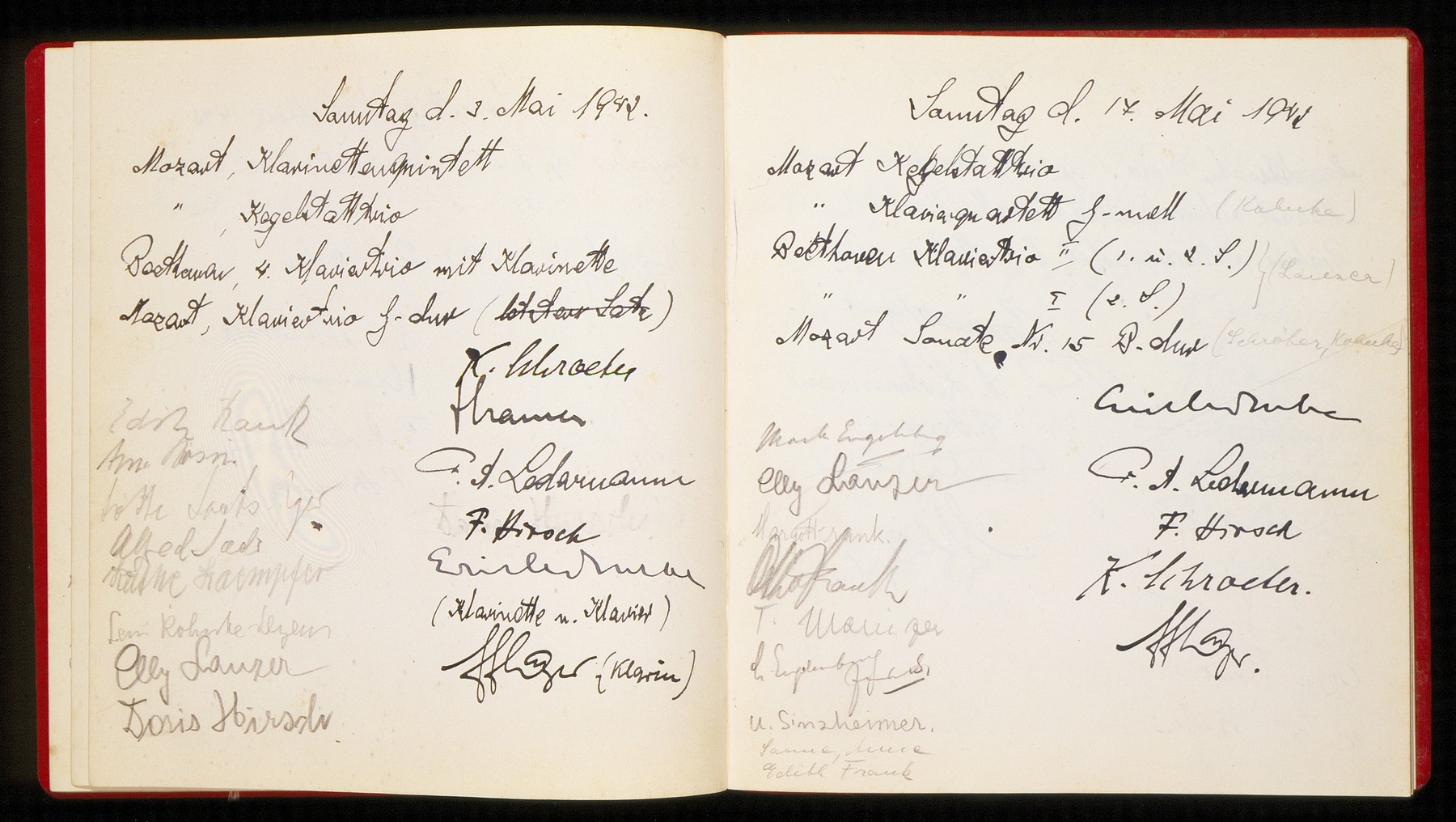 An open page of a guest book belonging to the Ledermann family which includes the signatures of Otto, Edith, and Margot Frank. The page is dated May 17, 1942 and records attendance at a chamber music concert in the Ledermann home in Amsterdam.

Biography
Barbara Rodbell (born Barbara Ledermann) is the daughter of Franz Anton Ledermann and Ilse Louisa Zeetroon. She was born September 4, 1925 in Berlin, where her father was a well-to-do lawyer. Barbara had one sibling, Susanna (b. 1928). The Ledermann family often vacationed in Holland, where they had many relatives. Barbara's maternal grandfather, Hendrick Zeetroon (d. 1931) was a Dutch Jew from Amsterdam who had moved to Berlin early in the century in search of a livelihood. He became a furrier and married Ellen Filipi, the daughter of a prominent Berlin Jewish family. The Ledermanns were a cultured and highly assimilated Jewish family that had little connection to the organized Jewish community. They did not attend synagogue and celebrated Christmas rather than Hanukkah in their home. In 1933 while vacationing in Holland, the Ledermanns were urged by one of their Dutch relatives not to return to Germany. Barbara's father found it difficult to believe that the situation in Germany would continue to deteriorate and decided to return to Berlin before making the decision to emigrate. Upon his return he found an official letter stating that he could no longer represent non-Jewish clients. This convinced him to pack up and leave immediately. The Ledermanns settled in Amsterdam where Ilse's mother had been living since her husband's death in 1931. Franz went back to school to earn a Dutch law degree and Ilse learned to live a more modest lifestyle without cooks, maids and nannies. Barbara and Susanna enrolled at a neighborhood school, where they became friendly with Margot and Anne Frank, who had also recently moved from Germany. The Franks lived just behind the Ledermanns, and the two families became close friends. Together they joined a Reform Temple and began celebrating some of the Jewish holidays. The Ledermanns remained in contact with the Frank family until the Franks went into hiding in July 1942. The Ledermanns, however, were told that they had fled to relatives in Switzerland.

Barbara was a talented ballet student, and dancing was her primary interest. With the help of an uncle she convinced her father to allow her to transfer to a dancing school. Following the German occupation, the Ledermanns were rendered stateless and their passports were revoked. Franz had applied for Dutch citizenship some years before, but it had not come through before the invasion of Holland. In the early years of the occupation Franz worked as a translator for the Jewish council (Joodse Raad), which provided him a permit that protected his family from resettlement. Beginning in the summer of 1941 the occupation became much more onerous as Jews were barred from public places and public transport and were subjected to a nighttime curfew. In August Jewish students were removed from the public school system and forced to attend Jewish schools in the east end of the city. In September 1941 Barbara turned 16. At that age she was considered an independent person and no longer was protected from deportation by her father's permit. This became a family crisis when a short time later the Germans announced that "unemployed" Jews would be sent to work in labor camps. Franz desperately sought employment for his daughter and finally found her a job at the Jewish cultural mission, which until the occupation had been a center for vocational training for those preparing to immigrate to Palestine and other destinations. The Germans allowed the organization to continue functioning, and Barbara was given work organizing various vocational and cultural courses. Many of those involved in the mission at that time were politically active, young Jewish leftists. One of them was Manfred Greenback, who soon became Barbara's first boyfriend. It was Manfred who awakened Barbara to the true intentions of the Nazi regime and convinced her of the necessity of obtaining false papers and refusing to obey German orders. Barbara's father resisted Manfred's advice, thinking it would endanger the whole family, but her mother trusted him implicitly and supported Barbara's efforts to go underground. After witnessing a razzia (round-up) in her neighborhood in the fall of 1942, Barbara went into hiding with the help of Manfred and his family. She found lodging at a nearby pension and enrolled at a ballet school run by a German dancer whom the Nazi administration had brought over to establish a ballet company. Barbara was soon invited to join the company. As a member of the ballet Barbara obtained identification papers that permitted her to travel and be on the streets after curfew. By this time Manfred and his sister had set up their own resistance cell made up of young Jewish men and women that maintained contact with the larger Dutch underground. Barbara became a member of this cell. Because of her Aryan appearance and impeccable papers, she was often called upon to move people from one hiding place to another, to help distribute underground publications and to sell supplies of contraband, such as French lipstick, to raise money for the underground. She also spent much time standing in line to obtain rations for Jews in hiding who could not get food themselves. Towards the end of June 1943, after Barbara had been living in hiding for many months, her father begged her to come home to visit. Despite Manfred's stern warning not to go, Barbara sewed back on her Jewish star and returned to her family's apartment. That same evening they were warned of an impending razzia in the neighborhood. Before she fled again, Barbara beseeched her parents to hide themselves and her sister behind the false wall they had built in the apartment. They did not follow her advice, as Manfred confirmed when he sneaked back into the apartment a short time after the round-up. Barbara's parents and sister were taken to Westerbork in June 1943, and in November were deported to their death in Auschwitz. Her grandmother had been arrested the previous year and was kept in Westerbork for a long time before being deported to Bergen-Belsen near the end of the war, where she died of illness.

Barbara was extremely lucky to have escaped from the neighborhood during the razzia. After hiding out with Manfred's family for a few days, she returned to her pension and resumed her underground activities. While her family remained in Westerbork Barbara was able to send them packages and receive mail. During her years in hiding Barbara was looked after from afar by a close friend of her mother's, the photographer Maria Austria. Maria had survived the June 1943 razzia by hiding behind a false wall in her apartment. Maria was disturbed by Barbara's decision to join the German ballet company, which she though put her in great danger. Maria therefore engineered her dismissal by informing the ballet director that Barbara was Jewish. Fortunately, the director did not denounce her to the police but only suggested that she leave to seek more training.

Following the liberation Barbara remained in Amsterdam another two years before acquiescing to the wishes of an old family friend to move to America. She was reluctant to leave because she had joined the new Ballet 1945 company and was romantically involved with a young German who had participated in the resistance. Eventually, however, she realized she had no future in Holland and left for the US in November 1947. Barbara worked at various jobs in New York for the next two years before moving to Baltimore, where she met Martin Rodbell. They were married shortly afterwards in 1950. Martin Rodbell was later to become the 1994 recipient of the Nobel Prize in physiology.