Group portrait of Jewish DPs on the pier in the port of La Spezia, where they await permission to sail to Palestine. 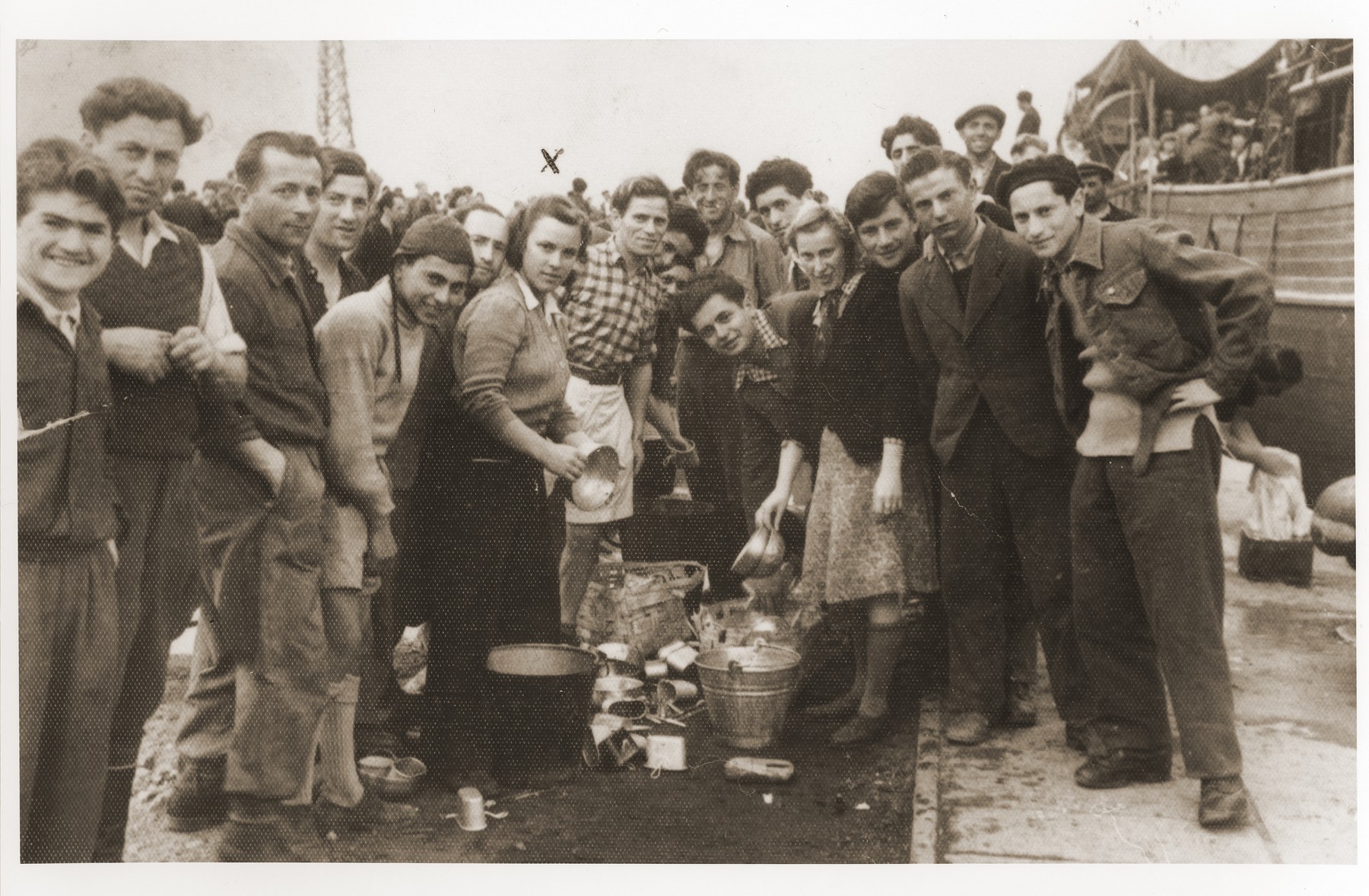 Group portrait of Jewish DPs on the pier in the port of La Spezia, where they await permission to sail to Palestine.

Saba Fiszman is in the center holding a pot. She drew an 'x' over herself to identify herself to her brother who had not seen her in eight years.

https://www.ushmm.org/wlc/en/article.php?ModuleId=10005462. https://www.ushmm.org/wlc/en/article.php?ModuleId=10005776.
Biography
Sarah Saaroni (born Saba Fiszman) is the daughter of Aron and Ester (Finkelsztein) Fiszman. She was born June 8, 1926 in Lublin, where the family owned a clothing store. Saba was the youngest of four children: Gidal (b.1915), Zosia (b.1917), and Julek (b.1920). In 1937 Gidal emigrated to Palestine. Soon after the German invasion, Zosia and Julek fled to the Soviet sector of Poland. Saba and her parents were soon confined to an open ghetto in Lublin. After the first deportation from the city, the Fiszmans fled to the village of Zakrzowek, where they lived for over a year with Marcin Nastaj and his family. In mid-1942, when the Germans began rounding-up Jews in Zakrzowek, the Fiszmans returned to Lublin, where there was now a closed ghetto. Ester and Aron decided to return to the ghetto, but they purchased false papers for Saba, who could pass as a Pole. Under the name of Lidia Wornik, Saba was sent to work in Hamburg with a group of Polish slave laborers. (Several others in her group were also hidden Jews.) In Hamburg, she worked in a factory producing syrup and sauces from mid-1942 through the spring of 1943. Initially Saba was able to correspond with her family via Polish friends, but after a time the letters stopped coming, and she realized that her parents had been deported. During the summer of 1943, when Hamburg was heavily damaged by Allied bombs, Saba fled with some friends to a nearby farming village. A few weeks later, in August 1943, Saba was arrested by the Gestapo and accused of being a Jew. She had been denounced by the Nastaj family after sending a postcard with Easter greetings (signed Sabcia) to them. Saba vehemently denied having written the letter and was given permission to return to her factory in Hamburg. Instead, she fled to the town of Gotha, where she was again arrested. Eventually, Saba was made to confess her Jewish identity and told that she would be deported to Poland. She was kept in jail for a month before being taken to the train. Once at the station, she eluded her captors by hiding in a bathroom. After her transport departed, Saba boarded the next available train, one going to Grossroehrsdorf. There, under the name of Helena Nowak, she was able to join another group of Polish factory workers. Saba remained at this factory until the city was liberated by the Russians in March 1945. She spent three months assisting the Russians in a field hospital before returning to Poland. Saba hoped to find her brother Julek, who had survived the war in Russia, and then join her oldest brother in Palestine. Settling temporarily in Warsaw, Saba joined the Kibbutz Ichud hachshara (Zionist collective) and later followed them on a Bricha route out of Poland. Eventually, Saba made her way to Germany, where she stayed for a time at the Foehrenwald displaced persons camp. There, she met a Jewish Brigade soldier who told her that Julek was in Italy. Saba made her way south and was reunited with her brother in Santa Maria di Bagni. She also met up with members of her Kibbutz Ichud hachshara from Warsaw, who were planning to sail illegally to Palestine from the Italian port of La Spezia. Saba joined the transport and participated in the protest that preceded Britain's agreement to let the ships sail to Palestine. When she arrived in Haifa in May 1946, Saba was reunited with her older brother Gidal, whom she had not seen in over eight years.