Exodus 1947 crew member Bernard Marks (third from the right) poses with a group of Palestinan Jews while in hiding at Kibbutz Ein Hashofet. 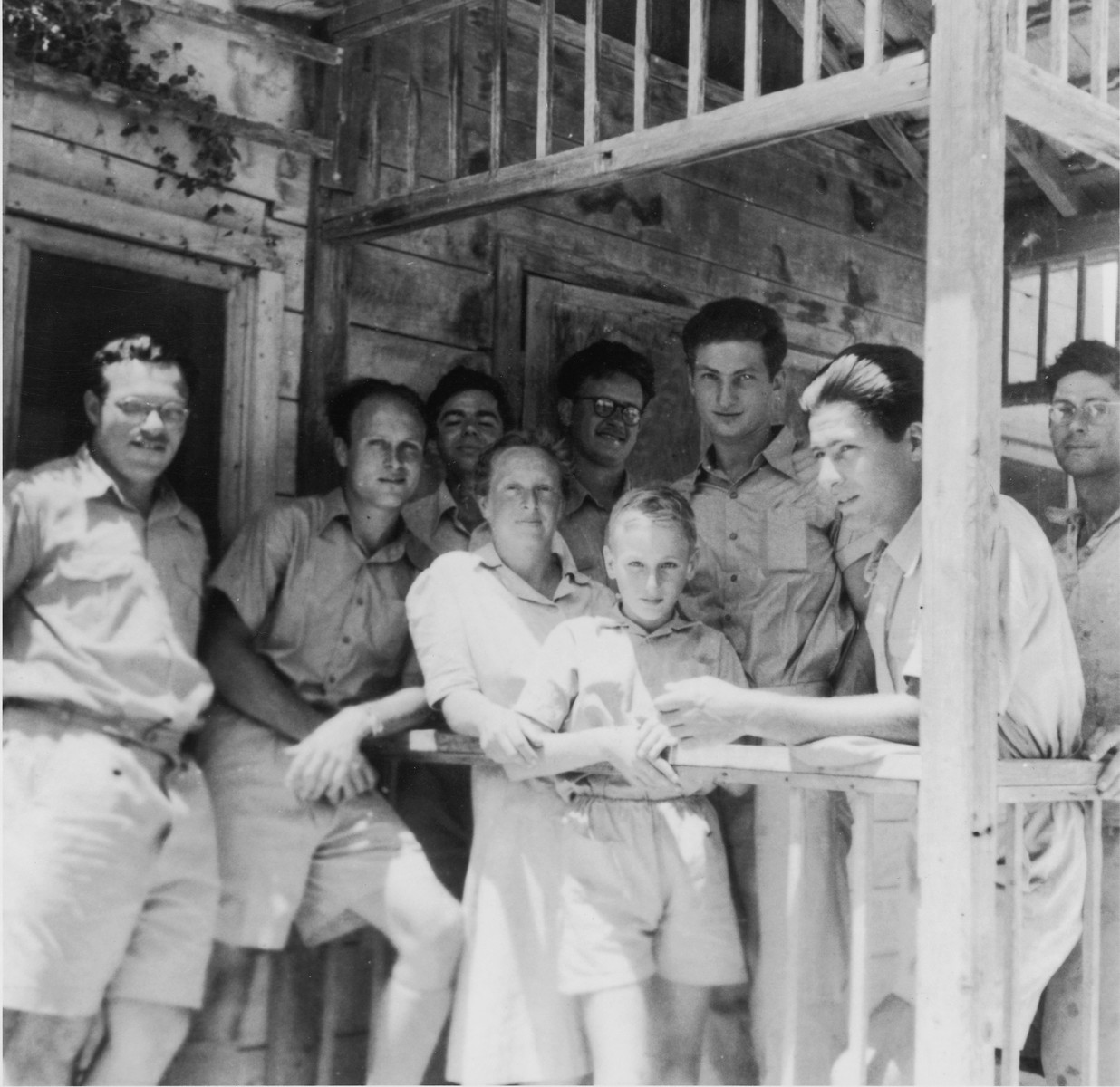 Exodus 1947 crew member Bernard Marks (third from the right) poses with a group of Palestinan Jews while in hiding at Kibbutz Ein Hashofet.

[Source: "Poppendorf statt Palastina" (The Haganah Ship Exodus 1947), an online exhibition by Henrik Jan Fahlbusch et al.
Biography
Bernard Marks (b.1924) an American recruit to the Haganah, the Palestinian-Jewish underground, who served as first mate aboard the Exodus 1947, the illegal immigrant ship to Palestine. A graduate of the US Merchant Marine Academy, Marks served three years on the North Atlantic during World War II. Following his discharge, he returned to his native Cincinnati and enrolled in an engineering program at the University of Cincinnati. At this time he was recruited by a Haganah agent to assist in the underground effort to bring Jewish displaced persons languishing in European camps to Palestine aboard ships that were to be purchased, outfitted and crewed by sympathetic Americans. Before joining the crew of the Exodus 1947, Marks sailed as second mate aboard the Haganah (formerly called the Norsyd). Following the ship's arrival in Palestine, Marks was hidden briefly and then smuggled out of the country, first to Greece and later to the US. He was back in Cincinnati for only a few months when he was tapped to serve on a second ship. In December 1946 Marks reported to the Baltimore shipyards to join the crew of the President Warfield, a former pleasure steamer that at one time had been the flagship of the Chesapeake Bay Lines. After partial refitting and a near-disastrous shakedown cruise, the Warfield departed for France, where the refitting of the ship was completed. In late July 1947, the ship, now renamed the Exodus 1947, left for Palestine with over 4500 displaced persons. While still in international waters off the coast of Palestine, the vessel was stopped by the British. When they attempted to board the ship, the crew and passengers fought them off all night with potatoes, tins of food, clubs and fists. During the melee the captain of the ship went into hiding in the hold of the vessel, leaving the twenty-three-year-old Marks in control. After the British subdued the ship, Marks guided the vessel into the port of Haifa. During the disembarkation process Marks slipped away with the help of Haganah members posing as dock workers and was taken to Kibbutz Ein Hashofet. He was later discovered by the British and imprisoned briefly before returning to the US. The following year Marks piloted a former US Navy patrol craft (called the Yucatan) from Mexico to France, with a cargo of illegal arms for the Haganah. (The vessel was later renamed the Noga and, along with two other American-sponsored ships, the Haganah and the Josiah Wedgewood, became the nucleus of the new Israeli navy after the declaration of the state in May 1948.) From France, Marks sailed to Israel aboard the Mala. Upon his arrival, he joined up with some of his former Exodus 1947 crew to train with the fledgling Israeli paratrooper corps. After the ceasefire, Marks served on several Israeli ships before returning to the US. Thereafter, he spent several years as a fundraiser for the United Jewish Appeal and then opened a real estate agency in his native Cincinnati.