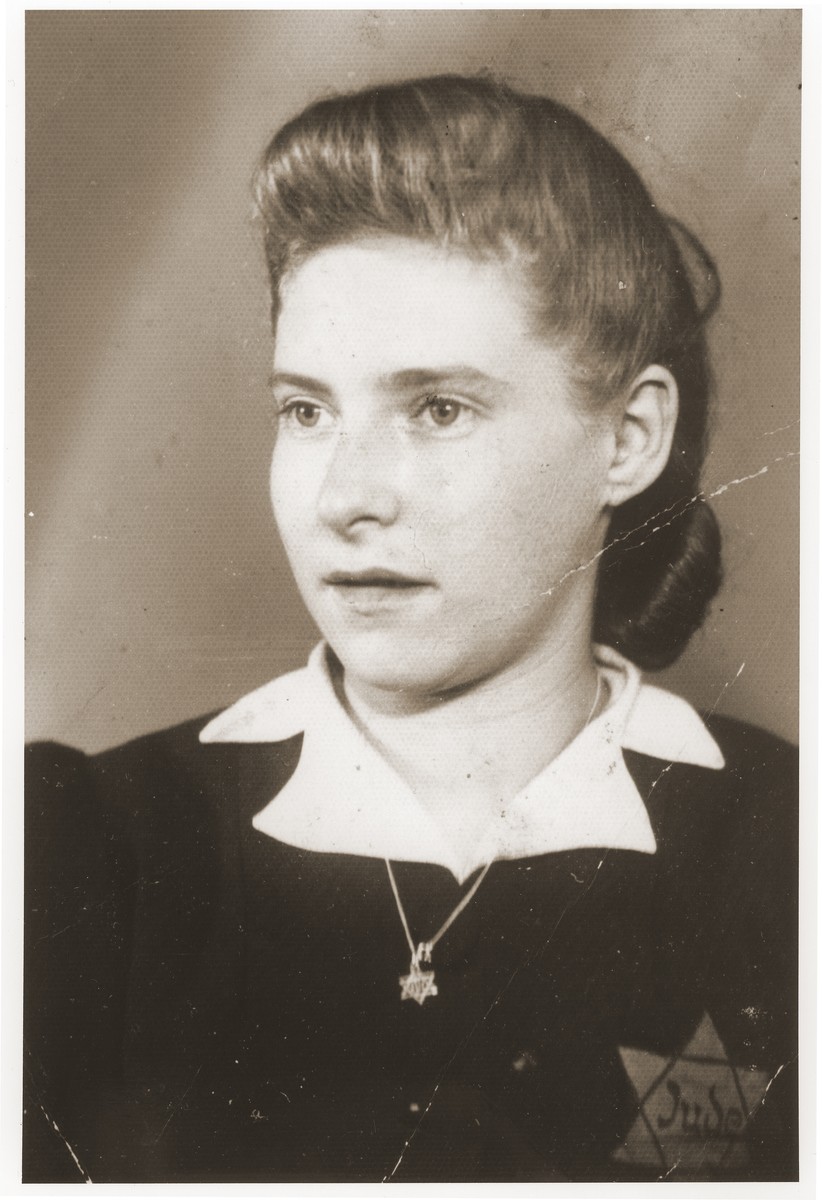 https://encyclopedia.ushmm.org/content/en/article/german-administration-of-poland. https://encyclopedia.ushmm.org/content/en/article/ghettos-in-poland.
Biography
Sara Bronner (born Kirszenbaum) and Moniek Broner are the parents of the donor. Sara was born on October 5, 1921 in Bedzin Poland where her father Shmuel Kirszenbaum, worked as a saddler. Her mother died when Sara was six years old. She had two younger sisters, Fela (later Kaligstein) and Devorah (later Blank). After her mother's death, her father remarried and he and his second wife Temze had three more daughters Sheindel, Sima and Rywka. The family was religious. Sara attended public school and also briefly attended an afternoon Bais Yaakov. German troops occupied Bedzin only days after the start of World War II and immediately instituted curfews and food rationing. Sara saw troops forcibly shave the beards of Jewish men and shoot people in the streets. Since Sara did not look visibly Jewish, she bought food for her family thereby circumventing the reduced rations for Jews. For the first year of the war, her father still worked at his saddlery until he was deported and sent to labor camp. For a time, he continued to relay messages to the family, but then this indirect contact ended. About half a year later, Sara's stepmother and two half-sisters were deported to an unknown camp (a third half-sister died before the war from natural causes). Then, Sara's remaining sisters Fela and Devorah were rounded up and sent to work camps. Sara had no more contact with her immediate family for the duration of the war. Sara was not deported since she was working at the Rosner Fabrik, a uniform factory run by Rosner, a sympathetic German who did his best to protect his workers. After the establishment of a formal ghetto, Sara had to leave her home but continued to work for Rosner until August 1943, when the Germans began the final liquidation of the ghetto. Sara had to board a train and traveled for almost a full day before arriving at Auschwitz, even though normally the trip would have taken only two hours. Sara's belongings were confiscated and she was tattooed with the number 50892. After about two weeks, she was snet to work in potato fields, fix streets and later in the laundry. She developed typhus and was told to go to the camp infirmary. Fearing she might be killed, she returned to her barrack. A female SS realizing that she had left the infirmary illegally, hit her on her head with her gun but allowed her to remain. The next day all the patients in the infirmary were taken to the gas chambers. After some time after returning from work, Sara and fifty other women were brought to the area outside the gas chambers. They were tasked with sorting the belongings of new prisoners and searching for valuables. This job allowed her to get more food and clothing and more comfortable living conditions. The women also took advantage of their position to smuggle jewelry to the men's camp and hide others in a jar outside their barrack. One day a man from her city called out to her and told her that he had seen her father still alive Markstadt. Sara continued to work sorting valuables until the Germans decided to evacuate the camp in January, 1945 in advance of its liberation. On January 17, Sara left Auschwitz on a three day forced march after which the prisoners were boarded onto open train cars. The hidden jewelry remained behind in Auschwitz. After four days, the train arrived in Ravensbrueck where Sara reunited with her aunt and cousin. After a few days, the women were brought to the Neustadt-Glewe labor camp. Sara remained there performing various jobs for the remainder of the war. On May 8, the prisoners noticed that the German guards had left and soon after, both American and Russian troops arrived. A few days later Sara returned to Bedzin with her aunt and cousin and a couple other girls. It took the women about three weeks to get home. Nothing remained of her family's possessions, but Sara learned that her youngest sister had survived. Sara returned to Germany and settled in Bayreuth where other survivors from Bedzin had gathered. She learned that her father did not survive, but her sister Devorah had survived and moved to Palestine on Yourh Aliya. Fela survived Bergen-Belsen and been evacuated to Sweden. Sara also met another survivor from Bedzin, Moniek Bronner (born November 10, 1918). The two married on November 3, 1946. Sara was in Bayreuth. Sara and Moniek immigrated to Israel in 1949, and their two daughters Shoshana and Adina were both born there. In 1962, the family immigrated to the United States.