Portrait of three young Jewish women who were brought to England after the war on the orphans transport. 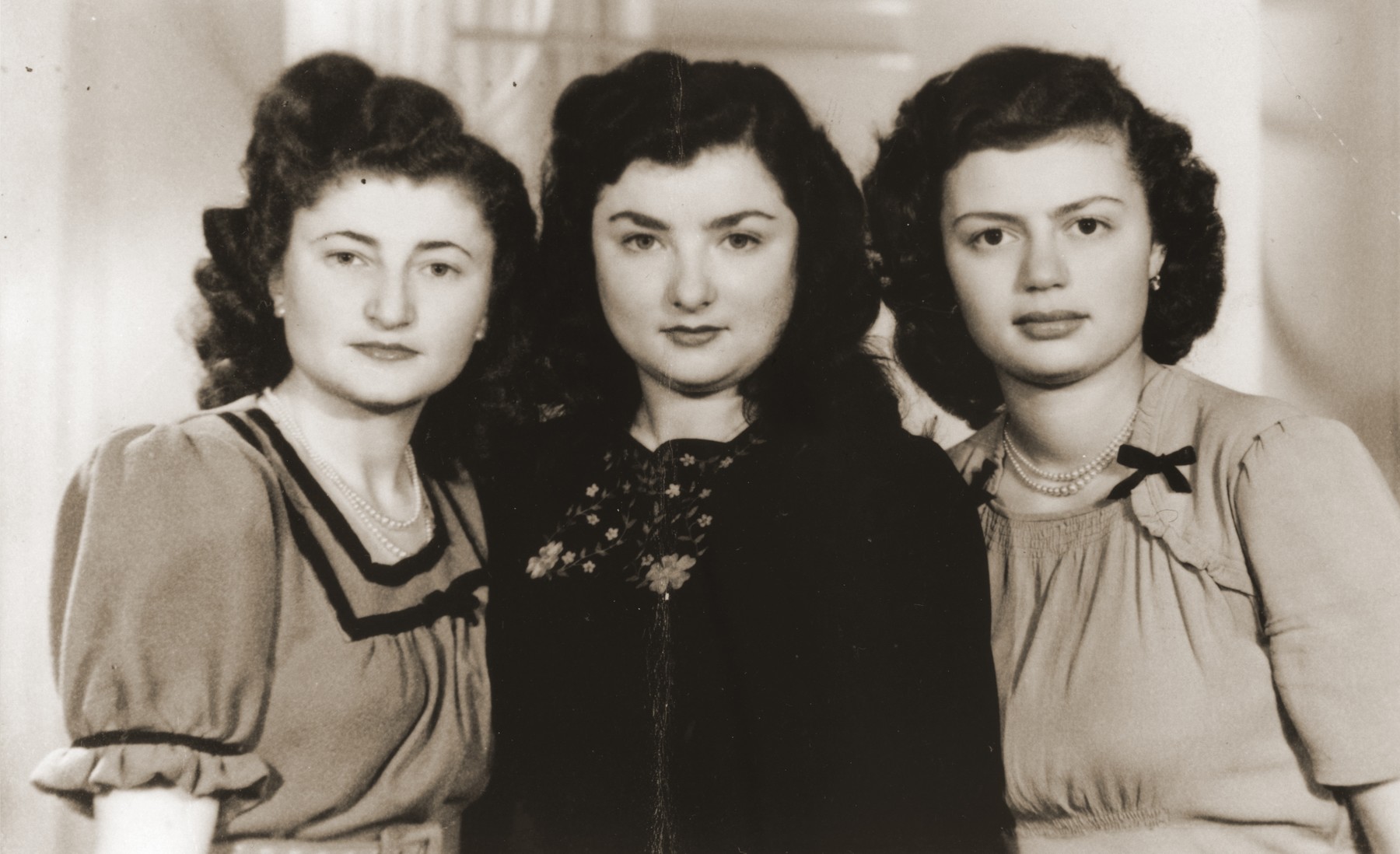 Portrait of three young Jewish women who were brought to England after the war on the orphans transport.

Pictured from left to right are Irene Mermelstein, Helen Slomowitz and Erika Vermes.

https://www.ushmm.org/wlc/en/article.php?ModuleId=10005142.
Biography
Erika Grossman (born Erika Vermes) is the daughter of Aladar and Helena (Beck) Vermes. She was born on May 14, 1931 in Topolcany, Slovakia, where her father was a studio photographer and her mother, an opera singer. Erika had an older brother, Robert (b. 1924). On March 27, 1942 members of the Slovak fascist Hlinka Guard rounded-up the Jewish men in Topolcany, including Erika's father and brother, and deported them to Majdanek, where they were killed. Two months later the Hlinka Guard came back for the women. The Guardsman who came to the Vermes apartment turned out to be someone who knew Erika's father. When the Slovak, whose name was Palcat, realized who he was about to arrest, he allowed them to get away. Immediately the Vermes' sealed up their house and fled over the border into Hungary. They settled in Budapest, where Helena was able to obtain a work permit because she had been born there. She placed Erika in a local Jewish orphanage for girls directed by Esther Jungreis. After the German occupation of Hungary in March 1944, Erika was given false papers in the name of Erika Virag. The Hungarian documents allowed her to move about freely, but she had no place to go, and so remained at the Jewish orphanage. In September 1944 Erika obtained a Swedish Red Cross Schutzpass [protective document] granting her immunity from deportation. It did not, however, protect her from arrest by members of the fascist, Hungarian Arrow Cross, who in November and December were rounding-up groups of Jews, shooting them along the banks of the Danube and throwing their bodies into the river. Erika was captured in one such round-up and taken to the Danube, but she managed to slip away during the heavy Russian bombardment of the city and survived until the liberation of Budapest in January. While Erika was at the orphanage, her mother was arrested and deported to a slave labor camp in Austria, called Feldbach. Near the end of the war the camp was evacuated and its prisoners, including Helena, her sister and her future husband, Imre Berczeller, were sent on a death march, during which Helena's sister died. After the liberation Erika and her mother met by chance on a street in Budapest. Together they returned to Topocany, but Helena soon went back to Budapest to marry Imre. A short time later there was a pogrom in Topolcany, and Helena and Imre decided to take Erika and move to western Czechoslovakia. When they reached the Sudety they learned about the orphans transport to England. Though officially not an orphan, Erika was accepted and left for Prague to join the transport. During her first years in England she lived at the Mansell Street shelter in London and worked in a jewelry business. In 1951 Erika immigrated to the United States, where she became an interpreter for HIAS [Hebrew Immigrant Aid Society] and married Joseph Grossman, another member of the orphans transport, in 1954. Erika's mother and stepfather immigrated to Palestine in 1949.