A letter written on the back of a picture postcard of the rue de la Victoire synagogue in Paris that was sent by Erika Vermes to her mother. 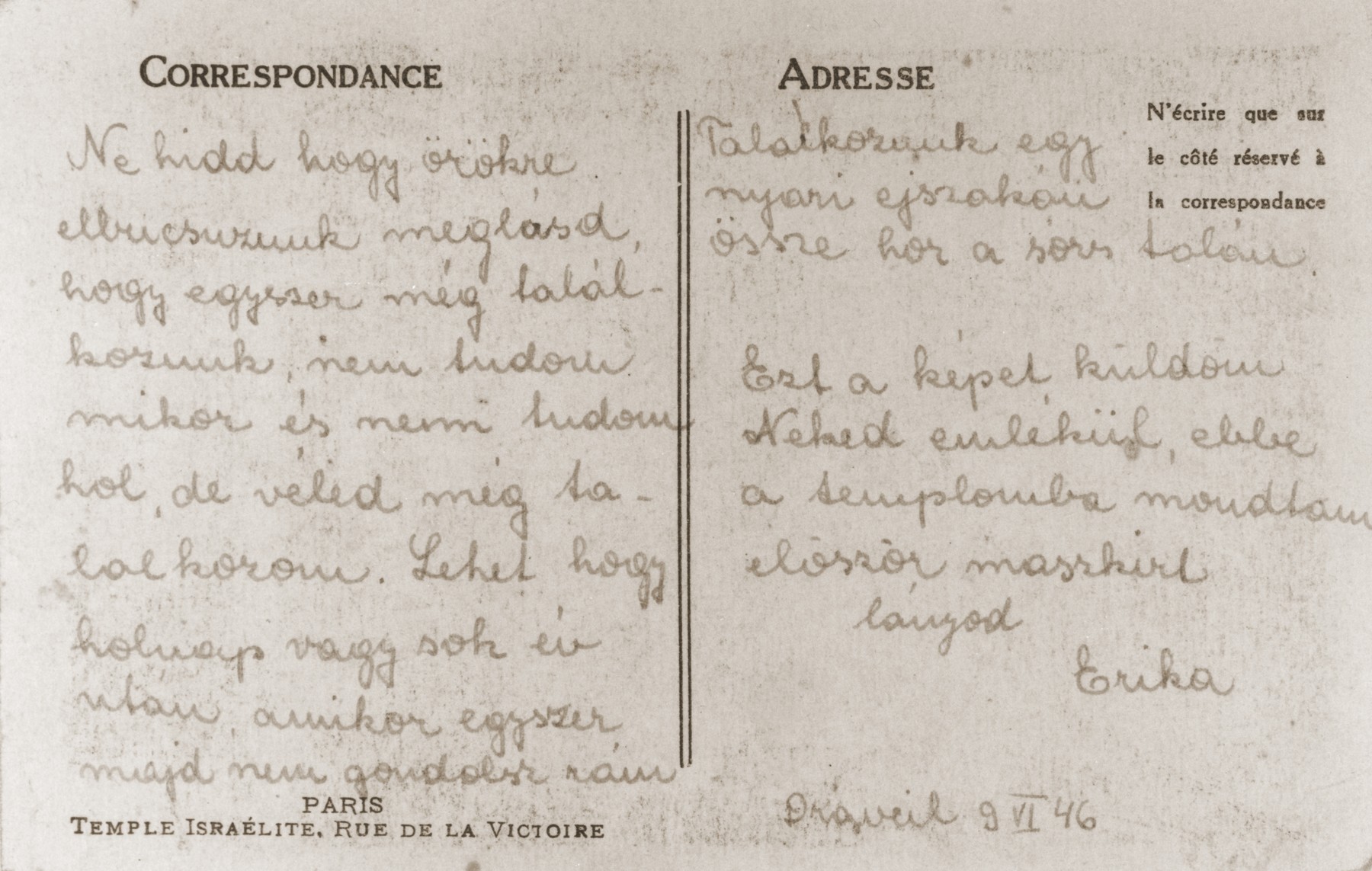 A letter written on the back of a picture postcard of the rue de la Victoire synagogue in Paris that was sent by Erika Vermes to her mother.

In the letter, Erika Vermes writes to her mother that she stopped in this synagogue to say Yizkor (the memorial prayer for the dead) for the first time since the end of the war.

Event History
After the liberation of the concentration camps, the British philanthropist, Leonard Montefiore, organized a campaign to bring young survivors to Britain. In June 1945 the British Home Office approved a plan to transport one thousand orphans to Britain for recuperation before their resettlement elsewhere. The program was paid for with funds raised by the Care of Children from Concentration Camps organization that was headquartered at the Bloomsbury House in London and chaired by Montefiore. The first group of three hundred orphans was brought from Theresienstadt to Prague and then flown to England on Lancaster bombers. They arrived on August 14, 1945. Though only children below the age of sixteen qualified for the transport, the group actually included several seventeen and eighteen-year-olds who had falsified their ages on their applications. Since very few young children survived the camps, all but thirty of the orphans were over the age of twelve. After landing in England the children were housed at a hostel in Windermere, where they received religious and secular instruction and medical treatment. The second group of orphans arrived in Southampton in November 1945, followed by groups in February and March 1946. The final group of orphans left Prague in April 1946. They stayed in Taverny, France for six weeks before coming to England in June. Despite considerable effort, the program's officers never found a full one thousand orphans who qualified for admission. In all, 732 children were brought to England. Though commonly called "The Boys," the group included eighty girls. All but a dozen were completely orphaned by the war. Soon after their arrival the children were regrouped by religious and political affiliation and sent to separate hostels for the ultra-orthodox, orthodox, religious Zionists and secular Zionists. By the fall of 1946 the program was running into financial trouble. Funding was low and most of the children had no prospects for moving elsewhere as originally intended. In 1947 the orphans were informed that they had to find employment and seek their own housing arrangements. To help maintain their social network, which had become a substitute for the families they had lost, the members of the orphans transport established the Primrose Jewish Youth Club on June 6, 1946. Financed by private donations, the Primrose Club provided a venue with a kosher dining facility where "the Boys" could continue to meet regularly. The club remained in existence until 1949 when it lost its lease. Of the 732 members of the orphans transport, approximately half settled permanently in England. The others moved to Israel, the United States and Canada.
https://www.ushmm.org/wlc/en/article.php?ModuleId=10005142.
Biography
Erika Grossman (born Erika Vermes) is the daughter of Aladar and Helena (Beck) Vermes. She was born on May 14, 1931 in Topolcany, Slovakia, where her father was a studio photographer and her mother, an opera singer. Erika had an older brother, Robert (b. 1924). On March 27, 1942 members of the Slovak fascist Hlinka Guard rounded-up the Jewish men in Topolcany, including Erika's father and brother, and deported them to Majdanek, where they were killed. Two months later the Hlinka Guard came back for the women. The Guardsman who came to the Vermes apartment turned out to be someone who knew Erika's father. When the Slovak, whose name was Palcat, realized who he was about to arrest, he allowed them to get away. Immediately the Vermes' sealed up their house and fled over the border into Hungary. They settled in Budapest, where Helena was able to obtain a work permit because she had been born there. She placed Erika in a local Jewish orphanage for girls directed by Esther Jungreis. After the German occupation of Hungary in March 1944, Erika was given false papers in the name of Erika Virag. The Hungarian documents allowed her to move about freely, but she had no place to go, and so remained at the Jewish orphanage. In September 1944 Erika obtained a Swedish Red Cross Schutzpass [protective document] granting her immunity from deportation. It did not, however, protect her from arrest by members of the fascist, Hungarian Arrow Cross, who in November and December were rounding-up groups of Jews, shooting them along the banks of the Danube and throwing their bodies into the river. Erika was captured in one such round-up and taken to the Danube, but she managed to slip away during the heavy Russian bombardment of the city and survived until the liberation of Budapest in January. While Erika was at the orphanage, her mother was arrested and deported to a slave labor camp in Austria, called Feldbach. Near the end of the war the camp was evacuated and its prisoners, including Helena, her sister and her future husband, Imre Berczeller, were sent on a death march, during which Helena's sister died. After the liberation Erika and her mother met by chance on a street in Budapest. Together they returned to Topocany, but Helena soon went back to Budapest to marry Imre. A short time later there was a pogrom in Topolcany, and Helena and Imre decided to take Erika and move to western Czechoslovakia. When they reached the Sudety they learned about the orphans transport to England. Though officially not an orphan, Erika was accepted and left for Prague to join the transport. During her first years in England she lived at the Mansell Street shelter in London and worked in a jewelry business. In 1951 Erika immigrated to the United States, where she became an interpreter for HIAS [Hebrew Immigrant Aid Society] and married Joseph Grossman, another member of the orphans transport, in 1954. Erika's mother and stepfather immigrated to Palestine in 1949.