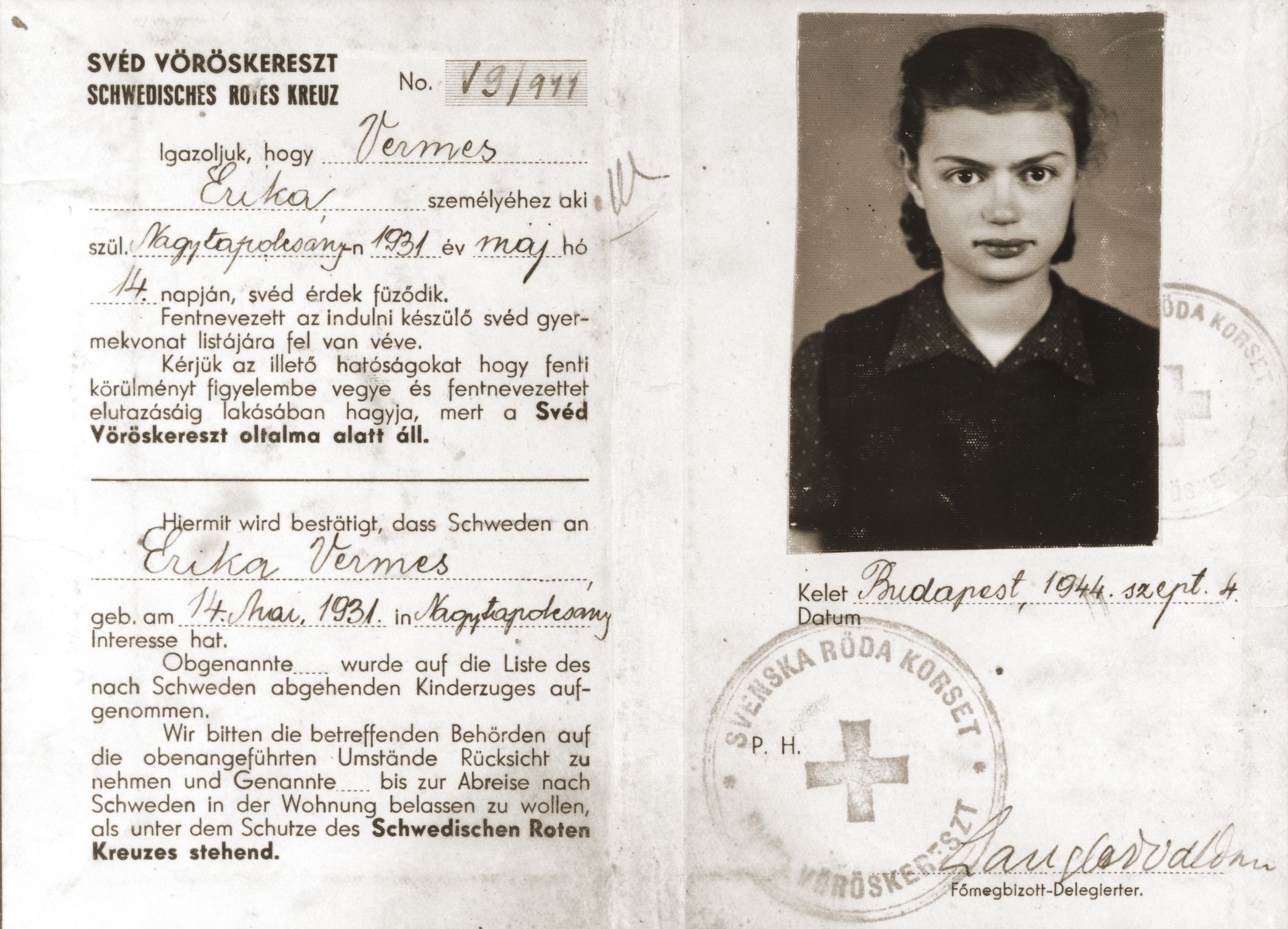 The document states that Erika's name appears on the passenger list of a Swedish children's transport that is about to leave Hungary and appeals to the authorities to let her remain at her current residence until the time of her departure.

Raoul Wallenberg (1912-c.1947), Swedish diplomat who saved the lives of tens of thousands of Jews in Budapest in the period between July 1944 and January 1945. Born into an aristocratic Swedish banking family, Raoul led a life of privilege. During his college years he studied architecture at the University of Michigan, but ultimately went to work for the family. In 1936 he spent six months at the Holland Bank, a branch of the family bank, in Haifa, Palestine. There he came into contact with Jewish refugees from Nazi persecution for the first time. Upon his return to Sweden he became an executive of an import-export firm headed by an Hungarian Jew that conducted business in Central Europe. During the early years of World War II, Wallenberg led a lively social life and otherwise appeared indifferent to world events, but there was an inner restlessness about him that seemed to be seeking an outlet. That outlet was found in the rescue of Hungarian Jewry. In the spring of 1944, the Swedish government (along with other neutral governments and organizations) was asked by the newly established U.S. War Refugee Board to help protect the Jews of Hungary, who in the wake of the German occupation, were in imminent danger of deportation to death camps. The Swedes delegated this task to Wallenberg, who was appointed First Secretary of the Swedish legation in Budapest. In addition to a diplomatic passport, he was given a large sum of money from the World Jewish Congress and War Refugee Board and carte blanche to use whatever methods necessary to effect the rescue of Hungarian Jewry. By the time Wallenberg arrived in Budapest on July 9, 1944, the Hungarian government had just halted the deportations begun in March. With the steady advance of the Soviet army, the puppet regime seemed eager to dissociate itself from the Nazis and polish its image in the international community. However, Adolf Eichmann continued to press hard to bring the Final Solution to the Jews of Budapest. Wallenberg wasted no time when he got to the capital and quickly became known for his unconventional methods and seeming fearlessness. After learning from Carl Lutz and others about the use of the Schutzbriefe (diplomatic protective passes), Wallenberg applied to the Hungarian Foreign Ministry for authority to use them. When permission was granted for only 1,500, he bribed officials to increase the figure to 15,000. Similarly, he sliced through bureaucratic complications to set up an extensive network of hospitals, daycare centers and soup kitchens for Jews under his protection. By early October Wallenberg was convinced that the situation was under control and that he could return to Stockholm. However, on October 15, a dramatic reversal took place as a result of the Arrow Cross coup and installation of the fascist Szalasi government. Deportations were resumed, the Schutzbriefe were revoked, and gangs of Arrow Cross hoodlums roamed the streets beating up Jews. In November Eichmann organized a series of death marches of Jews from Budapest to the Austrian border. Wallenberg reacted immediately. By dangling the possibility of Swedish diplomatic recognition as bait, he got the new government to revalidate the Schutzbriefe. He also played a key role in the establishment of the International Ghetto, a series of 31 buildings in which more than 30,000 Jews were concentrated under the protection of the neutral legations and the Red Cross. Using the money at his disposal he organized a paid staff of over 300, including medical personnel for two hospitals. Wallenberg repeatedly appeared at the railroad station in Budapest to distribute Schutzbriefe to Jews assembled for deportation, who he then escorted to a convoy of diplomatic cars parked nearby. When the death marches began, Wallenberg followed the columns of Jews in his car and handed out hundreds of Schutzbriefe during rest stops. These Jews were then sent back to Budapest. In the last weeks of the war, when he heard that the retreating Germans intended to blow up the central ghetto and its nearly 70,000 Jewish residents, Wallenberg rushed to the office of the garrison commander and threatened to have him prosecuted for war crimes if he carried out the plan. Wallenberg's life was under constant threat and rumors spread that the SS and Arrow Cross were engineering an "accident" to eliminate him without violating his diplomatic immunity. In the end, however, he was captured by the Russians rather than by the Germans and their collaborators. On January 17, 1945, a few days after the liberation of Pest, Wallenberg set out for Debrecen under Soviet military escort to see the Russian commander, Marshal Malinovsky, about a plan for the rehabilitation of the Jewish community. He was never seen again, and no explanation was ever proffered for his arrest. In 1957 the Soviets officially announced that Wallenberg had died from a heart attack in 1947 at Moscow's Lubianka prison, but no evidence was provided. When the Commission for the Designation of the Righteous came into existence in 1963, Wallenberg became one of the first rescuers to be officially recognized by Yad Vashem.