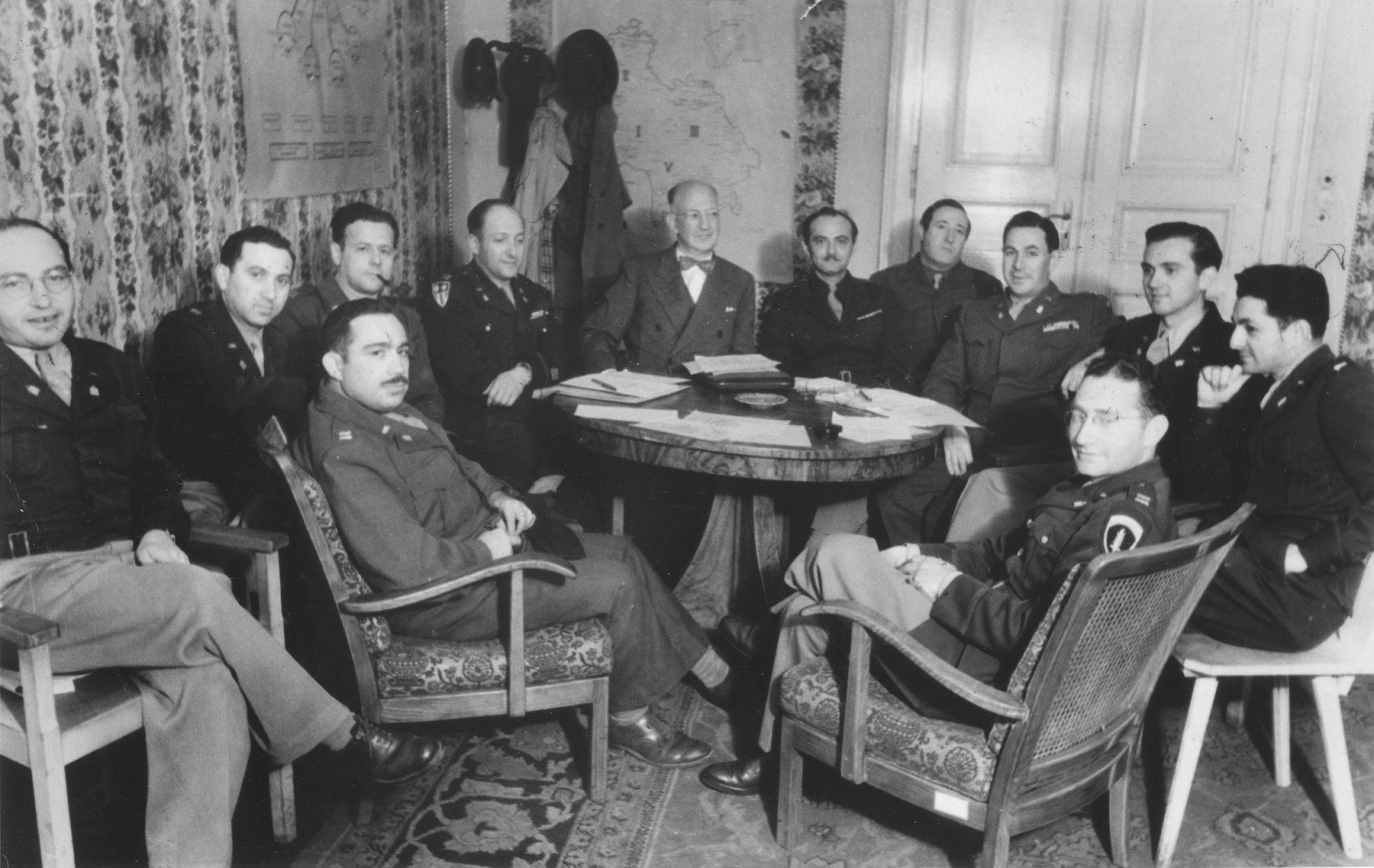 Among those pictured are Judge Louis Levinthal (with bow tie); Mayer Abramowitz (second from the right, in front of the door); Abraham Klausner (far right); and Oscar Lifschutz (front left in the arm chair).

https://www.ushmm.org/wlc/en/article.php?ModuleId=10005367.
Biography
Mayer Abramowitz is the son of Chaim Yitzhak and Rachel Lea Abramowitz. He was born December 12, 1919, in Jerusalem, where his father was a rabbi and kosher butcher. When Mayer was nine years old his family came to the U.S. to escape the escalating violence in Jerusalem. They lived first in Hartford, Connecticut, and then in New York City. In 1935 Mayer's parents returned to Palestine but left him in New York, where he studied and boarded at the Talmudic Academy, an orthodox yeshiva. Later he attended Yeshiva College and rabbinical school at the Jewish Theological Seminary. In 1944 Mayer received his rabbinical ordination and the following year became a chaplain in the U.S. Army. From 1945 to 1947 he was stationed in Germany, first in Bad Wildungen, where he replaced Rabbi Ernst Lorge, and then in Berlin, where he succeeded Rabbi Herbert Friedman as chaplain of headquarters, Berlin District. Like his predecessor, Abramowitz was deeply involved in efforts to assist Jewish DPs then streaming into Berlin from Eastern Europe. Among his many activities was establishing one of the largest schools for DP children in the American zone at the Schlachtensee displaced persons camp and running a weekly teachers' seminar for Jewish instructors in the district's DP camps and centers. He also was instrumental in setting up a summer camp for Jewish DP children in the Grunewald Forest. In July 1946 Abramowitz was on duty at the Wittenau DP camp in the French zone of Berlin to greet the last truck of Jewish DPs from Eastern Europe who were arriving along the Stettin route. Among the members of this transport was Rachel Kosowski, a Jewish woman from Janov who had been deported with her family to the Soviet interior and lived out the war there. Mayer became acquainted with Rachel at his weekly teachers' seminar and the two were married in Berlin on November 23, 1947. Shortly before their wedding Abramowitz was ordered to Salzburg, Austria, to deal with the new wave of Jewish DPs, who were fleeing over the border from Romania. The American military sought to prevent their entry into Germany and hoped the chaplain could prevail upon the Bricha to cooperate. Between September 1947 and his discharge in April 1948, Abramowitz served in the Austrian DP camps of Linz, Bindermichl, Hallein and Bialik. Mayer and Rachel returned to the U.S. in the spring but were back in Europe by September 1948, after he accepted a position with the Joint Distribution Committee to be their chief immigration officer in Italy. For the next two-and-a-half years Abramowitz worked in Rome and Naples, helping to bring about an orderly closing of the displaced persons camps. In the spring of 1951, after the birth of their daughter, Dahlia, the Abramowitz' moved back to the United States and settled in Miami Beach, Florida, where Mayer became rabbi of Temple Menorah.