Fundraising pamphlet issued by the Combined Appeal in Boston to raise money for Jewish refugee children who came to the United States from France. 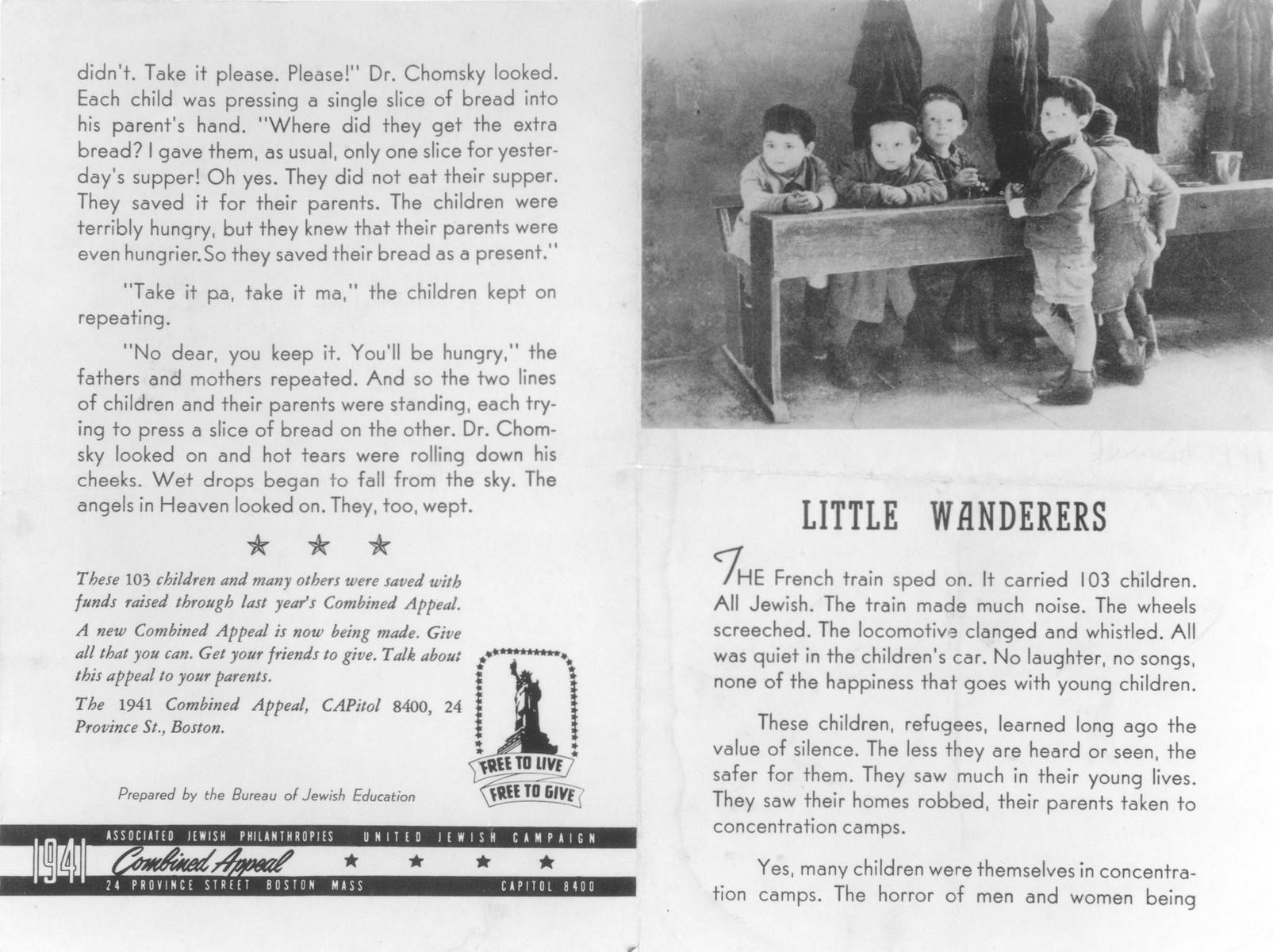 Fundraising pamphlet issued by the Combined Appeal in Boston to raise money for Jewish refugee children who came to the United States from France.

Biography
Liesel Appel (born Liesel Weil) is the daughter of Dr. Max Weil and Flora (Froehlich) Weil. She was born on November 11, 1930 in Nuremberg, Germany, where her father worked as an orthopedic surgeon. Liesel had three siblings: Herbert, Gerda and Suse. On Kristallnacht her home was vandalized and her father was arrested. Dr. Weil was sent to Dachau, the first of four stays in the camp. The family tried unsuccessfully to get the three older children out of the country. They were then told that one child could be sent to France. Initially, Herbert was chosen to go, but as the time approached, he was unwilling to leave the family, and Liesel was sent in his place. She took the train to Saarbrucken and then crossed the border into France, posing as the daughter of a peasant woman. Liesel stayed with the woman for two weeks and then moved to the home of a Jewish family. After this family left for Palestine, Liesel was placed temporarily with another Jewish family, until she was transferred to the OSE children's home in Eaubonne. After the fall of France, Liesel was sent to another children's home in the unoccupied zone. In the spring of 1941 permission was granted for a transport of OSE refugee children to go to the United States. Though initially Liesel was not on the list, after another child developed diphtheria she was sent in her place. The children travelled to Lisbon by way of Gurs and Madrid. In all, 103 children sailed to New York aboard the Portuguese liner, Mouzinho. The transport was sponsored by the American Friends Service Committee, and the children were met in New York by representatives of several Jewish organizations. For the next two-and-a-half years, Liesel bounced from foster home to foster home, where she was often poorly treated. Finally, at the age of thirteen she was sent to the home of Natalie and Harry Miller who became her surrogate parents. Liesel's older sister, Gerda, went to Palestine with the Youth Aliyah program shortly after Liesel left for France. Her parents, brother and youngest sister all perished during the war.