Werner Neuberger poses outside with a group of friends from the La Guette children's home. 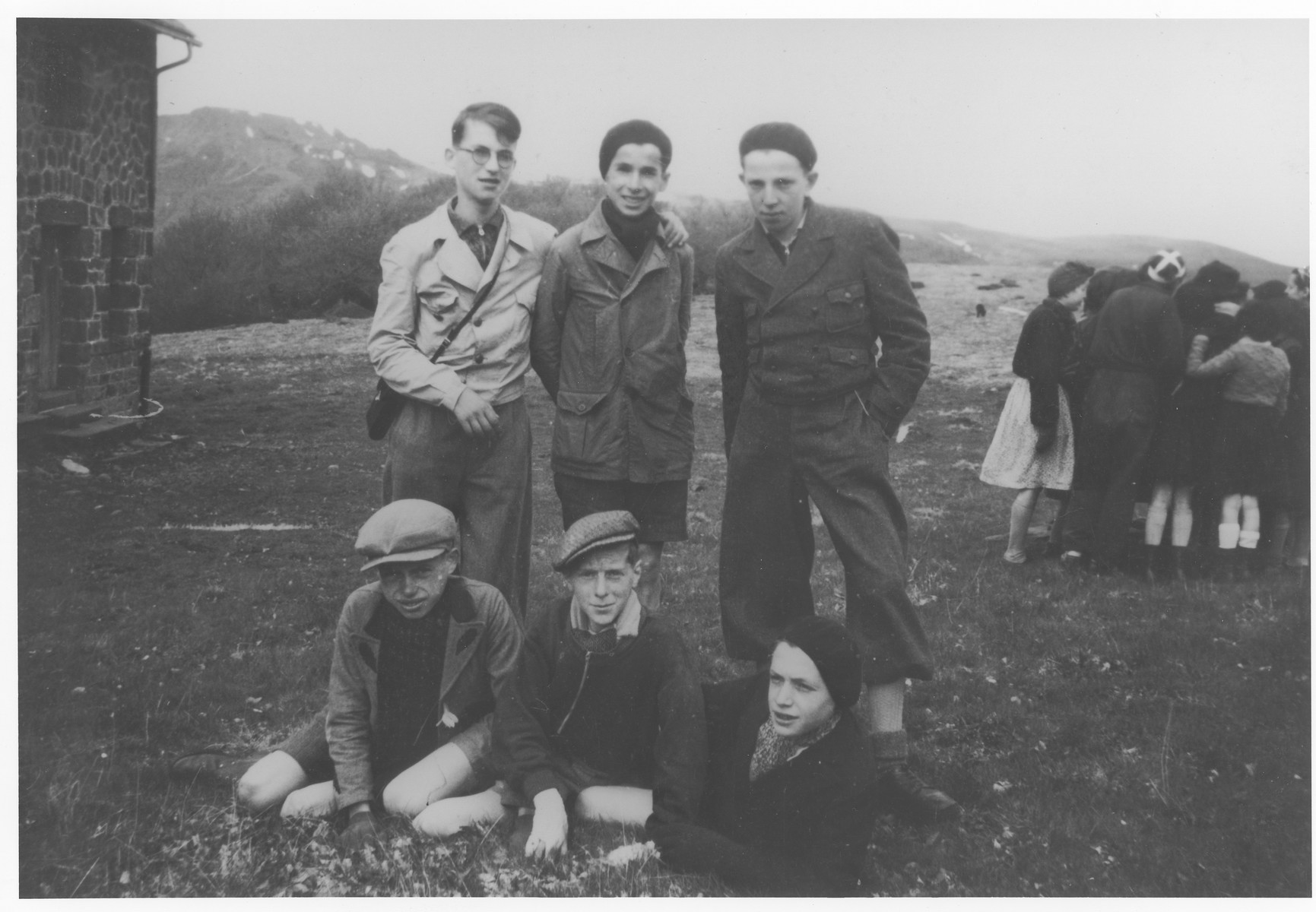 Werner Neuberger poses outside with a group of friends from the La Guette children's home.

Event History
Chateau de la Guette was a mansion owned by Edouard and Germaine de Rothschild located in the Seine-et-Marne district near Paris. Between March 1939 and May 1940, la Guette served as a home for 130 German Jewish refugee children between the ages of nine and fifteen. The home was a major project of Le comite israelite pour les enfants verrant d'Allemagne et l'Europe Centrale, an assistance committee founded by Germaine de Rothschild in the wake of the Kristallnacht pogrom, to get Jewish children out of Nazi Germany and Austria. The children arrived in March and April 1939, in convoys from the Palatinate, Berlin and Vienna. La Guette was directed first by Willy Katz and subsequently by Ernst Jablonski. In the summer of 1939, nine fourteen and fifteen-year-old girls were sent to a boarding school in St. Briac (Bretagne) to learn French. The other children remained in la Guette until it was evacuated in May 1940 to the village of La Bourboule in the Massif Central region where it was directed by Flore Loinger, wife of Georges Loinger. Henry Pohoryles served as an educator. There, the children were housed at the Hotel des Anglais. Some of the older girls worked at the hotel and other establishments in the village, while the older boys were hired as farmhands or apprenticed to local aritsans. Others were sent to a boarding school in Clermont-Ferrand to further their education. At the end of 1941, after the departure of the Rothschilds for the U.S., the home was integrated into the OSE network, and the children were transferred to various centers. In 1942, two groups of children were allowed to emigrate to the U.S. via Lisbon. Of those who remained in France, ten were later deported and all but one perished. A few managed to escape to Switzerland or joined the resistance, and the rest survived on false papers, hidden in monasteries or with French families until the end of the war.
Biography
Werner Neuberger is the son of Moritz and Tony (Mayer) Neuberger. He was born on June 3, 1926 in Rodalben, Germany where his father was a salesman. Werner had two older siblings, Annelise and Fritz. In March 1939 Werner left Rodalben in a Kindertransport to France from Mannheim. He was taken to the La Guette children's home, where he was one of 130 German Jewish refugee children who were given shelter in a château owned by the Baron Edouard de Rothschild. Werner remained there until May 1940. After the German occupation the children were transferred to the Hotel des Anglais in the village of La Bourboule (Massif Central). From 1942 to 1944 Werner lived and worked on a farm owned by Baron Guy de Rothschild in Perigueux. On March 28, 1944 French police arrested Werner at the farm and turned him over to the Germans. He was sent to a labor camp on the Ille Anglo-Normand d'Aurigny, an island in the English Channel, where he was interned with Russian, French and Jewish prisoners. They were put to work making fortifications along the beaches, including constructing bunkers and installing anti-aircraft guns. A few months after his arrival the camp was evacuated and the prisoners moved to Boulogne in northern France, where they worked repairing bridges and railroad tracks. As the Americans approached, the Jewish prisoners were evacuated. They were loaded into sealed boxcars and sent east towards Germany. Werner was on the train for a week. Most of the tracks were damaged, and the train had to stop several times, but the prisoners were kept locked inside. Finally the train stopped in Diksmuide, Belgium, where the resistance had destroyed a bridge. The prisoners were afraid to get out at first, but then spotted Red Cross workers who assured them that they were safe. Members of the Belgian resistance hid the prisoners for four days until the British arrived. Since Werner had no papers, the mayor of Diksmuide provided a document allowing him to return to France. When Werner reached Paris, he made his way to the Rothschild bank. There he found Baron Guy de Rothschild in the uniform of a French army captain. When Werner told the baron of his desire to return to work on his farm, Rothschild invited him to stay in his home in Paris until he could give him a lift to Perigueux. While on the farm, Werner received a letter from a cousin serving in the American army in Europe. Once he discovered Werner's whereabouts, the cousin contacted Werner's sister, who had immigrated to the United States. While Annelise was making arrangements for Werner's immigration, Baron de Rothschild invited Werner to return to his home in Paris. Werner stayed with the baron for one year before joining his sister in the U.S. in December 1946. Werner's brother Fritz was killed during the war in Majdanek.