A young Jewish DP child waves a homemade flag while riding on the shoulders of an older boy at the port of Marseilles. 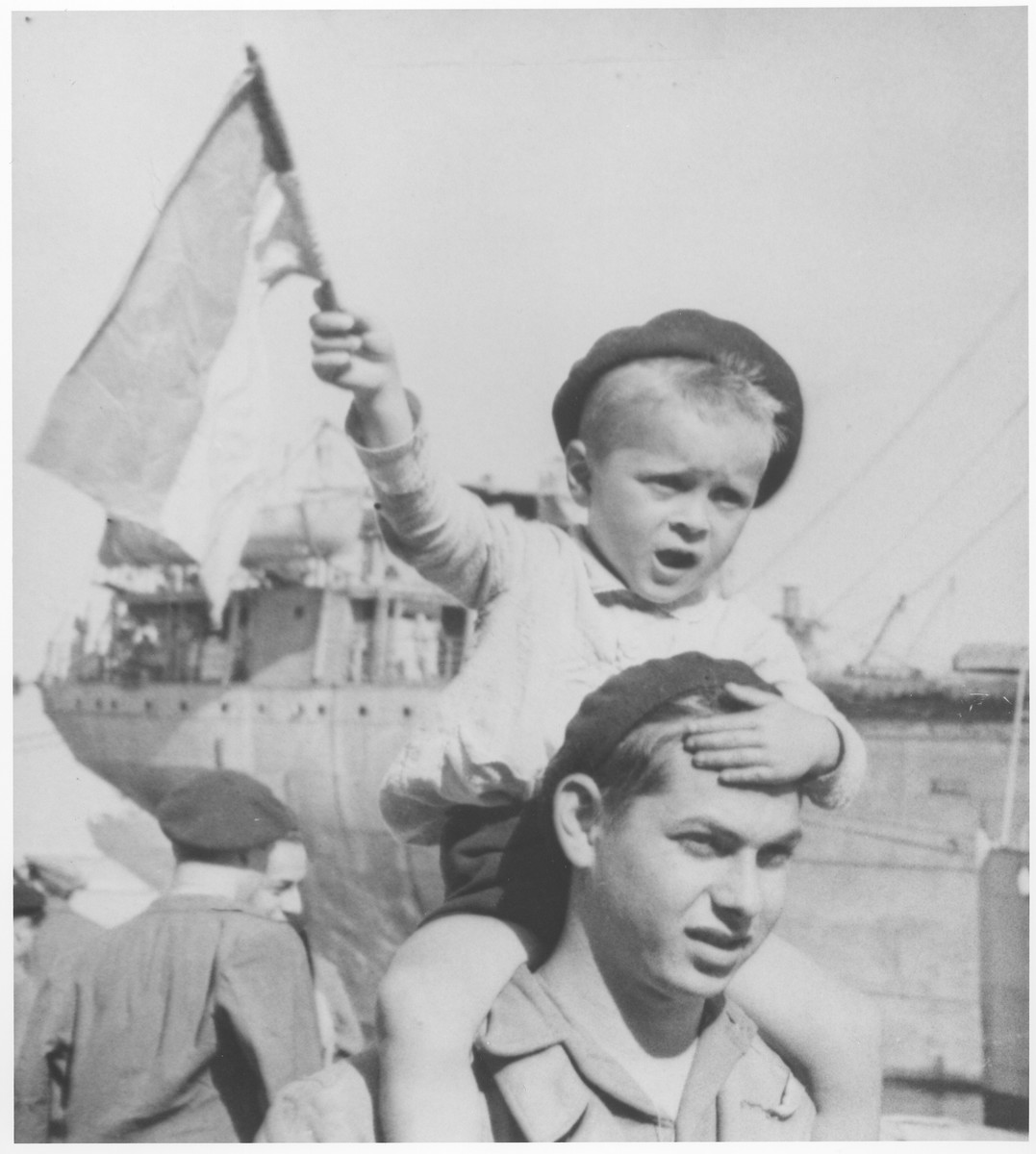 A young Jewish DP child waves a homemade flag while riding on the shoulders of an older boy at the port of Marseilles.

The two boys are about to board the RMS Mataroa for Palestine.

Event History
These are Jewish DPs who sailed aboard the British vessel, the RMS Mataroa, from Marseilles to Haifa. This legal transport, which was funded in part by the American Jewish Joint Distribution Committee, carried 1,164 passengers, including 242 orphans rescued from Buchenwald and other concentration camps.

The Buchenwald children were a group of approximately 1000 Jewish child survivors found by American troops when they liberated the Buchenwald concentration camp on April 11, 1945. Most of the children were originally from Poland, though others came from Hungary, Slovenia and Ruthenia. Unsure of what to do with the child survivors, American army chaplains, Rabbi Herschel Schacter and Rabbi Robert Marcus, contacted the offices of the OSE (Oeuvre de Secours aux Enfants), the Jewish children's relief organization in Geneva. They arranged to send 427 of the children to France, 280 to Switzerland and 250 to England. [Vivette Samuels reverses the figures for England and Switzerland in her monograph, "Sauver les Enfants."] On June 2, 1945 OSE representatives arrived in Buchenwald, and together with Rabbi Marcus escorted the transport of children to France. Rabbi Schacter accompanied the second transport to Switzerland. Because of the difficulty in finding clothing for the children, the boys were clad in Hitler Youth uniforms. This created a problem, for when the train crossed into France, it was greeted by an angry populace who assumed the train was carrying Nazi youth. Thereafter the words "KZ Buchenwald orphans" were painted on the outside of the train to avoid confusion. On June 6, 1945 the French transport arrived at the Andelys station and the orphans were taken to a children's home in Ecouis (Eure). The home had been set up to accommodate young children, but in fact only 30 of the boys were below the age of 13. This was only one of the many problems faced by the OSE personnel, who were not prepared to handle a large group of demanding, rebellious teenagers who were full of anger for what they had experienced. At Ecouis the boys were given medical care, counseling and schooling until more permanent accommodations could be found. Most of the children remained only four to eight weeks at Ecouis before being moved elsewhere, and the home was closed in August 1945. Among the first to leave were a group of 173 children who had family in Palestine. They were given immigration certificates and departed from Marseilles in July aboard the British vessel, the RMS Mataroa. The remaining boys at Ecouis were soon transferred to other residences and homes. Some of the older ones were sent to the Foyer d'Etudiants located on the rue Rollin in Paris, where they boarded while attending vocational training courses or working at jobs in the city. Others were sent to the Chateau de Boucicaut home in Fontenay-aux-Roses (Hauts-de-Seine). Many of the boys came from religiously observant homes. Since the OSE could not obtain kosher food for everyone, they divided the children into religious and non-religious groups. Dr. Charly Merzbach offered OSE the use of his estate, the Chateau d'Ambloy (Loir-et-Cher) for the summer, and between 90 and 100 boys chose to go there in order to receive kosher food and live in a religious environment. In October 1945 the children and staff of Ambloy were relocated to the Chateau de Vaucelles in Taverny (Val d'Oise). About 50 of the non-religious boys were taken to the Villa Concordiale in Le Vesinet (Yvelines) near Paris that housed an equal number of French Jewish orphans. In the summer they went to the Foyer de Champigny in Champigny-sur-Marne (Val-de-Marne). In all the homes attended by the Buchenwald children vocational training as well as regular classroom instruction was offered. At the same time OSE social workers made every effort to locate surviving relatives, succeeding in about half the cases. By the end of 1948 all of the Buchenwald children who had come to France had left the OSE fold and begun new lives for themselves.