Telegram sent to JDC European Director Morris Troper in Paris by JDC Chairman Paul Baerwald and Harold Linder in London thanking him for his hard work in the successful resolution of the MS St. Louis refugee crisis. 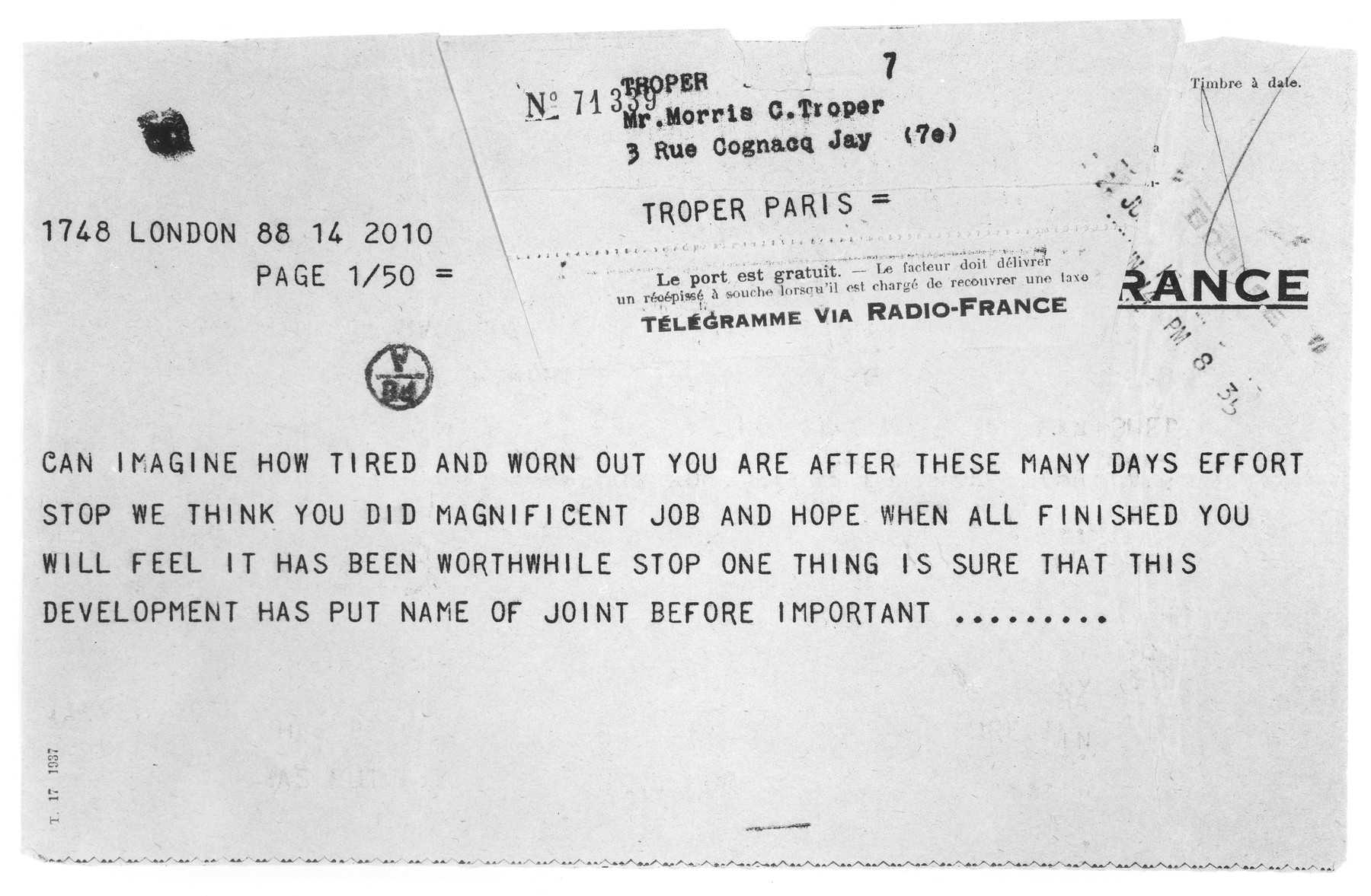 Telegram sent to JDC European Director Morris Troper in Paris by JDC Chairman Paul Baerwald and Harold Linder in London thanking him for his hard work in the successful resolution of the MS St. Louis refugee crisis.

Event History
The St. Louis was a German luxury liner carrying more than 930 Jewish refugees from Nazi Germany to Cuba in May 1939. When the ship set sail from Hamburg on May 13, 1939, all of its refugee passengers bore legitimate landing certificates for Cuba. However, during the two-week period that the ship was en route to Havana, the landing certificates granted by the Cuban director general of immigration in lieu of regular visas, were invalidated by the pro-fascist Cuban government. When the St. Louis reached Havana on May 27 all but 28 of the Jewish refugees were denied entry. The American Jewish Joint Distribution Committee (JDC) dispatched Lawrence Berenson to Cuba to negotiate with local officials but Cuban president Federico Laredo Bru insisted that the ship leave Havana harbor. The refugees were likewise refused entry into the United States. Thus on June 6 the ship was forced to return to Europe. While en route to Antwerp several European countries were cajoled into taking in the refugees (287 to Great Britain; 214 to Belgium; 224 to France; 181 to the Netherlands). Only those who were accepted by Great Britain found relative safety. The others were soon to be subject once again to Nazi rule with the German invasion of western Europe in the spring of 1940. A fortunate few succeeded in emigrating before this became impossible. In the end, many of the St. Louis passengers who found temporary refuge in Belgium, France and the Netherlands died at the hands of the Nazis, but the majority survived the war.
Biography
Morris Carlton Troper (1892-1962), American Jewish lawyer and communal leader, who from 1938 to 1942 served as chief of European operations for the American Joint Distribution Committee. During his tenure he focused his efforts on promoting Jewish emigration from Nazi Europe, organizing relief efforts and channeling funds to Jewish communities and welfare organizations. During the St. Louis affair Troper was instrumental in convincing the governments of the Netherlands, Belgium, France and Great Britain to offer safe haven to the stranded Jewish refugees. He also organized the "Camp Commission" to aid Jewish refugees imprisoned in French internment camps and unofficially supported efforts by the Jewish Agency to organize the illegal immigration of Jews to Palestine. After the fall of France and the transfer of JDC headquarters to Lisbon, Troper spent most of his time in the US gathering support for European relief efforts. In 1942 soon after the entry of the US into World War II, Troper resigned from the JDC to enlist in the US Army. From 1942 to 1946 he headed the Office of Fiscal Direction, attaining the rank of Brigadier General. After leaving the army in 1946, Troper returned to Jewish communal work, lending his efforts to the resettlement of Jewish displaced persons and projects related to the founding of the State of Israel. He retired in 1949.