Julien and Georges Engel prior to their departure for the United States. 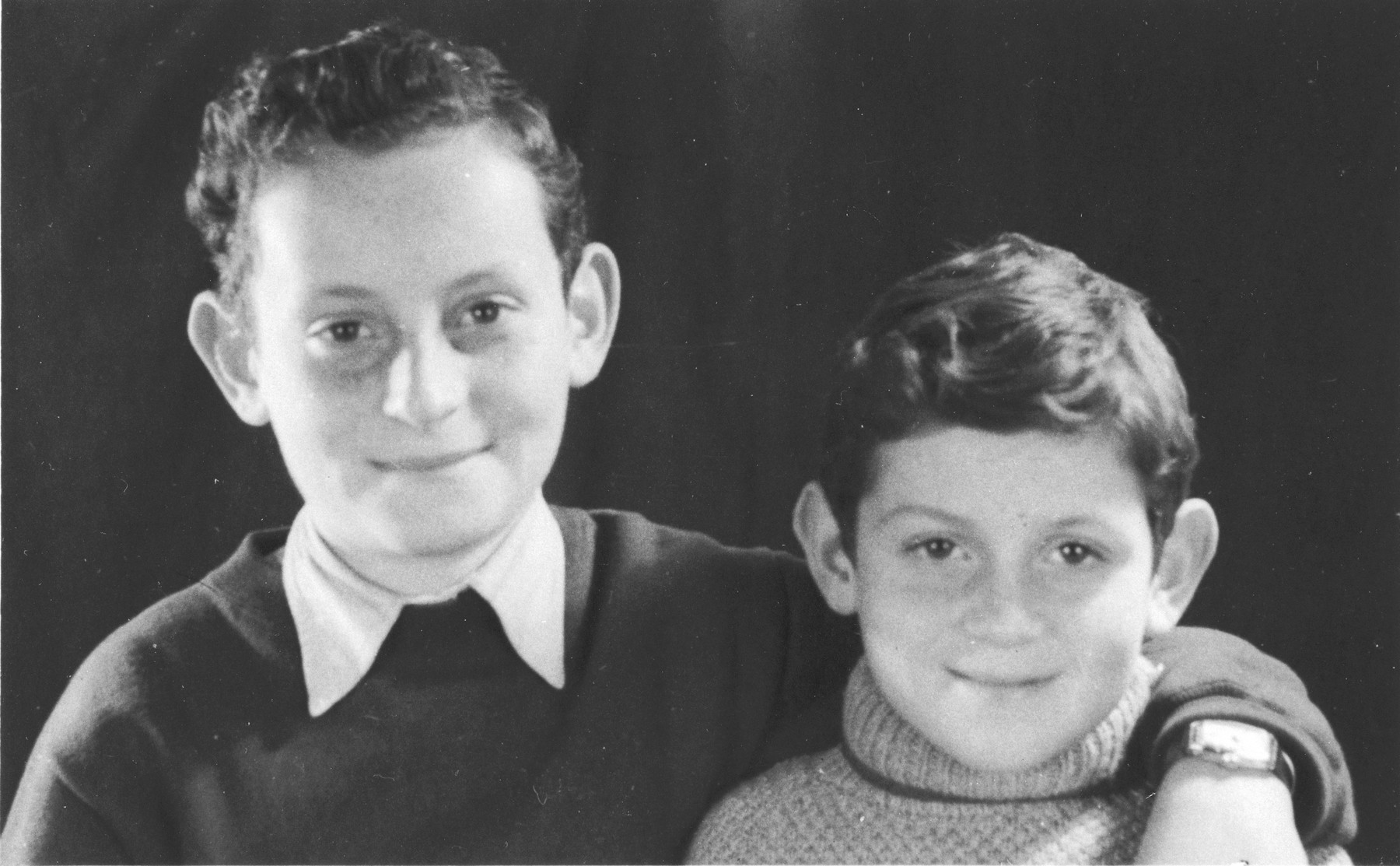 Julien and Georges Engel prior to their departure for the United States.

https://www.ushmm.org/wlc/en/article.php?ModuleId=10005367.
Biography
Julien Engel is the son of David and Rosa (Futerko) Engel. He was born in Antwerp, Belgium on September 6, 1933. His parents, both Polish Jews from Lodz, had met as students in Germany and were married in Dortmund in 1931. In August 1933, soon after the Nazi seizure of power, the Engels left for Belgium. However, they were arrested at the border town of Aachen and jailed for two weeks, before being permitted to continue their journey. A few weeks after their arrival in Antwerp, Julien was born. His younger brother Georges was born there in 1938. Julien's father owned a furniture business in Antwerp until the German invasion in May 1940. A few weeks later the family fled to Nice, where Julien's mother had a cousin. In September 1942 when the Vichy regime began to arrest Jewish refugees in the unoccupied zone, the Engels attempted to flee to Switzerland, but were arrested at the border town of Annemasse. After being held by the French police in nearby Annecy for several days, they were taken to the Rivesaltes internment camp. Two weeks after their arrival Julien and his brother were released, along with a group of fifty children, into the hands of an international welfare organization. Several weeks after their departure, Julien's parents were transferred to Drancy and then deported to Auschwitz, where they perished. Upon their release from Rivesaltes, the Engel boys were taken to a makeshift children's home in the village of Vendines, near Toulouse. They remained there for three months until their mother's cousin, Anna Fachette, came to take them to her home in Nice, where she lived with her sister. The widow of a Frenchman, Anna was a naturalized French citizen and felt reasonably secure in Italian-occupied Nice. The capitulation of Italy in September 1943 triggered the immediate entry of German forces into the Italian-occupied zone of France. Their arrival was accompanied by immediate large-scale round-ups that targeted French Jews and Jewish refugees alike. Anna Fachette and her sister were caught in a round-up while shopping in the city during the first days of the German occupation. A Christian friend, who was mistakenly arrested with them and then released, hurried back to Anna's home to warn the children. Julien, following the advice Anna had given him in case of trouble, took Georges and fled to his neighbor, M. Neyborg, who was the honorary consul of Sweden in Nice. Within an hour or two of their escape, the Gestapo or French Milice arrived at Anna's home. Finding no one else to arrest, they sealed off the house. M. Neyborg kept the boys at his home for a few days until he was able to make arrangements with the Catholic diocese, whom he knew to be involved in the hiding of Jewish children. The Engel boys were taken to Le Rayon de Soleil, a children's home in nearby Cannes run by Alban and Germaine Fort. There they remained for the next three years, until an American uncle arranged for their immigration to the United States in September 1946. It was only long after the war that Julien and his brother learned of the Abadi (Marcel) network and the role it played in their rescue. In 1985 Alban and Germaine Fort were both recognized by Yad Vashem as Righteous Among the Nations.