Jewish leaders attend a conference in the US Zone of Germany. 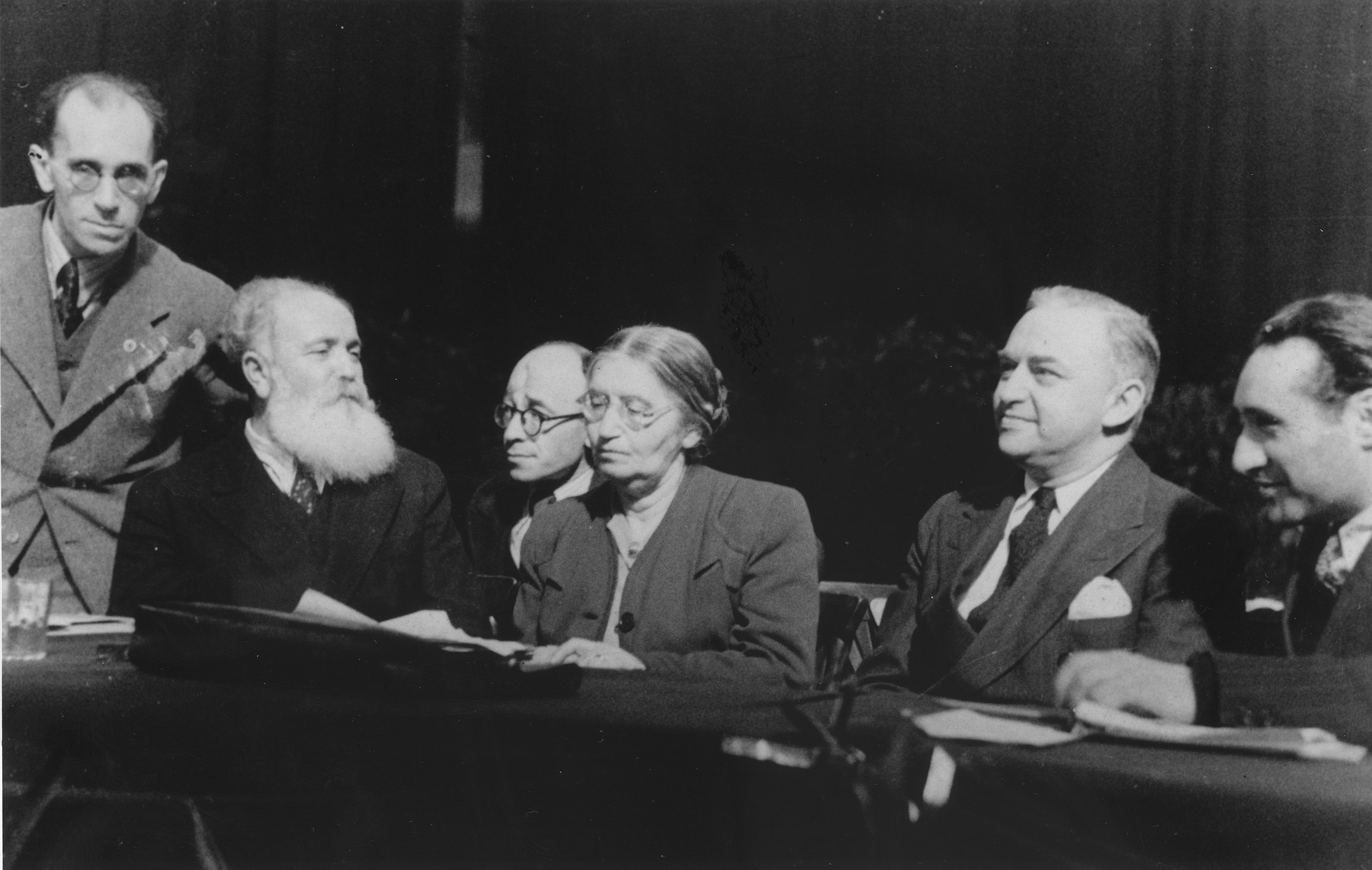 Jewish leaders attend a conference in the US Zone of Germany.

https://www.ushmm.org/wlc/en/article.php?ModuleId=10005367.
Biography
Jacob (Vitkin) Zerubavel (1886-1967), leader of the Zionist Poale Zion movement. Born in Poltava, Ukraine, Zerubavel joined the Poale Zion in his youth and in 1906 was elected to its executive board. After helping socialist Zionist ideologue Ber Borochov publish an underground newspaper, Zerubavel moved to Vilna, where he was imprisoned for 18 months. Upon his release he moved to Lvov. There, he worked on the editorial board of a Jewish newspaper called Der Yiddisher Arbeter. In 1910 Zerubavel immigrated to Palestine, where he edited the Hebrew newspaper of the Poale Zion movement, Heachdut, together with Yitzhak Ben-Zvi and David Ben-Gurion. During World War I Zerubavel was sentenced to prison by the Turkish authorities for criticizing their treatment of the Yishuv [Jewish community in Palestine]. He managed to escape and fled to America in 1915, where he again worked on the editorial board of a Poale Zion newspaper. When the Russian Revolution took place in 1917, Zerubavel returned to Russia and became a member of the National Jewish Council of the Ukraine. He spent the next decade and a half (1918-1935) in Poland, where he numbered among the leaders of the Poale Zion and later, of the Left Poale Zion. He also worked as an editor of a Yiddish newspaper and served on the Warsaw community council Though he visited Palestine at this time, the British would not allow him to resettle there until 1935. Once back in the Yishuv, Zerubavel took up publishing Yiddish books and journals. He also served on the executive committee of the Histadrut [Labor council]. During World War II Zerubavel was a member of the Yishuv's rescue committee. In 1948 he became a member of the Zionist Executive and helped forge the MAPAM party. From 1951 he directed the Histadrut's labor archive. He continued to write and edit in Hebrew and Yiddish. Among his published works are two volumes of memoirs, published in 1960 and 1966.

Philip Sidney Bernstein (1901-1985), American reform rabbi who served as the adviser on Jewish affairs to the commander of the US forces in Europe between May 1946 and August 1947. Born in Rochester, New York, Bernstein was ordained in the first class of rabbis at the Jewish Institute of Religion in 1926. He went on to become rabbi of Temple Brith Kodesh in Rochester. During World War II the Jewish Welfare Board appointed him executive director of the Committee on Army and Navy Religious Activities. In May 1946 Bernstein became the nominee of the newly-created Five Jewish Cooperating Organizations to succeed Rabbi Judah Nadich and Judge Simon Rifkind as the third adviser on Jewish affairs to the commander of US forces in Europe. During his fifteen months of service under Generals Joseph McNarney and Lucius Clay, Bernstein labored to smooth relations between the American military and Jewish survivors, to improve the living standards of Jewish DPs and to provide educational, vocational and employment opportunities for them in Germany while they awaited immigration elsewhere. He also worked to gain official American recognition for their representative body, the Central Committee of the Liberated Jews in the US Zone of Germany (September 1946) and to push through some of their projects, such as securing a DP delegation at the first postwar Zionist Congress in Basel (December 1946) and the publication of the Shearit Hapleita [Surviving Remnant] edition of the Talmud (1947-1951). Bernstein's most notable challenge and achievement during his tenure as Jewish adviser, was assisting the mass movement of Jewish infiltrees from Eastern Europe into the American zones of occupation and helping to dissuade the US Army from closing the borders during the period of the mass migration of Polish Jews after the Kielce pogrom of July 1946. Following his return to the US in the summer of 1947, Bernstein served as president of the Central Conference of American Rabbis and later as chairman of the American Israel Public Affairs Committee.