Betje Wijnberg rides a bicycle with two large suitcases. The suitcases are filled with sewing notions that she is peddling to local farmers. 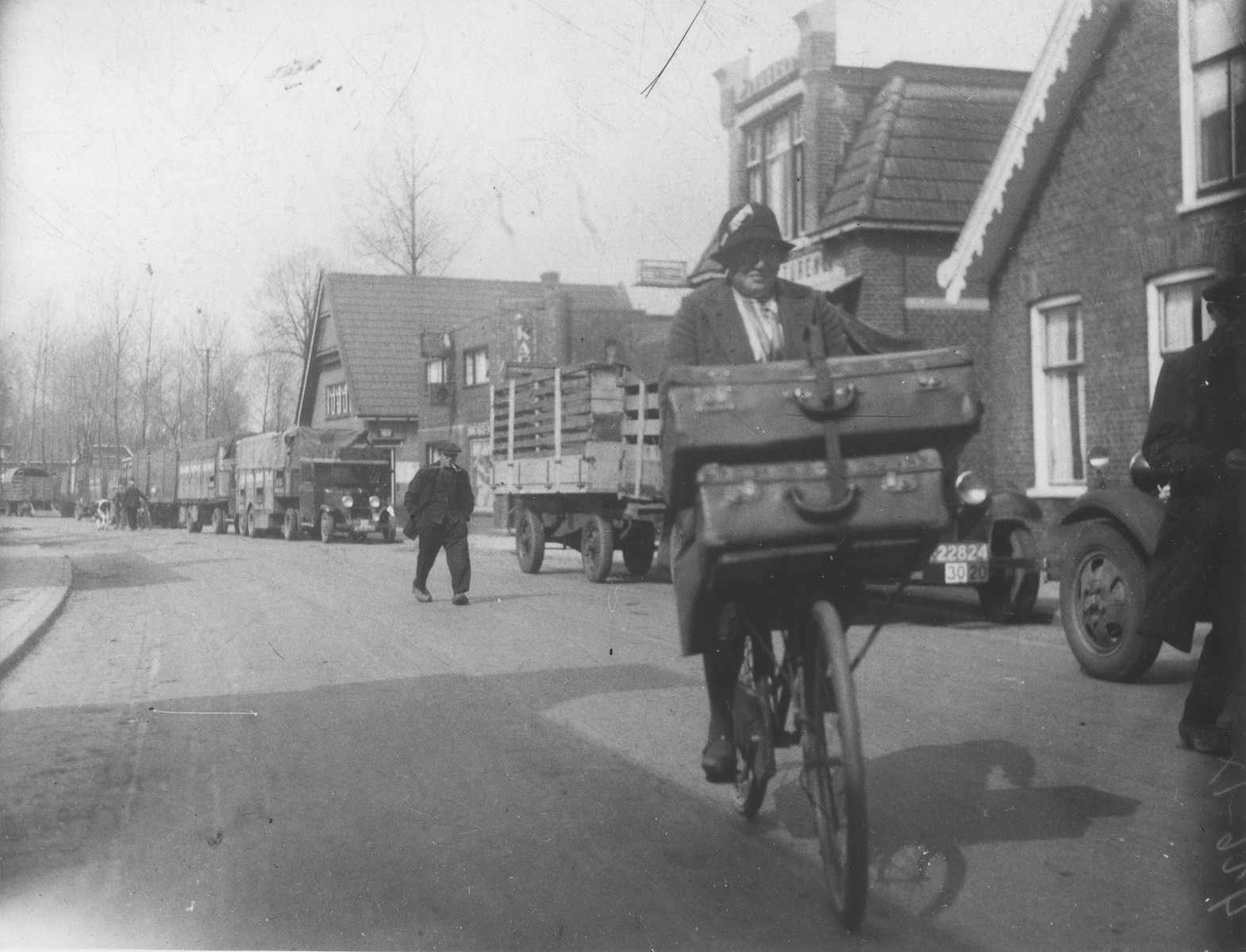 Betje Wijnberg rides a bicycle with two large suitcases. The suitcases are filled with sewing notions that she is peddling to local farmers.

Biography
Selma Engel (born Selma Wijnberg) is the daughter of Alida (Nathan) and Samuel Wijnberg. She was born in Groningen, Holland in 1922, where her father owned a factory. Selma had three older siblings, Abraham, Maurits and Marthyn. In 1929, Selma's father lost the factory and moved to the town of Zwolle. There he ran a kosher hotel that catered to Jewish cattle dealers. During the German occupation the family initially remained in Zwolle. In 1941, Selma's father died of natural causes. Her brother Abraham married and moved to Utrecht, where his family survived the war in hiding. In August 1942, Selma's brother Maurits married Betje Jakobs. Owing to Nazi regulations prohibiting Jews from moving to new dwellings, the couple had to live apart and could only visit each other in secret. Subsequently, Maurits was sent to a work camp and from there, to Auschwitz, where he perished. His wife was also deported to her death in Auschwitz. In 1942 or 1943, Selma's mother and Marthyn were also deported to Auschwitz, where they were killed. Selma evaded a similar fate by going into hiding with a group of twenty-seven other Jews. The Dutchman who hid them, however, informed the Gestapo, and all were arrested. Selma was imprisoned for three months in Amsterdam before being transferred to the Vught concentration camp. Three months later she was sent to Westerbork, where she remained for one week before her deportation to the Sobibor death camp in April 1943. There, she met her future husband, Chaim Engel (b. 1916 in Brudzew, Poland) The two participated in the Sobibor revolt and escaped on October 14, 1943. They were among the few who survived until the liberation. For the first two weeks after their escape they hid by day and travelled by night until meeting Adam Nowak, a sympathetic farmer who agreed to hide them in exchange for money. They lived on his isolated farm in Pliskow, near Chelm, until the arrival of Soviet troops in June 1944. After the war Selma and Chaim lived temporarily in Chelm until the Soviets tried to conscript Chaim into the Red Army. The couple quickly changed their name to Kriseck and left the city. After a period of extended travel they reached Odessa in the spring of 1945, where they boarded a ship for France. Eventually they returned to Holland, where they remained until immigrating to the United States in 1957.