Four-year-old Dorien Grunbaum works on an art project at her home. 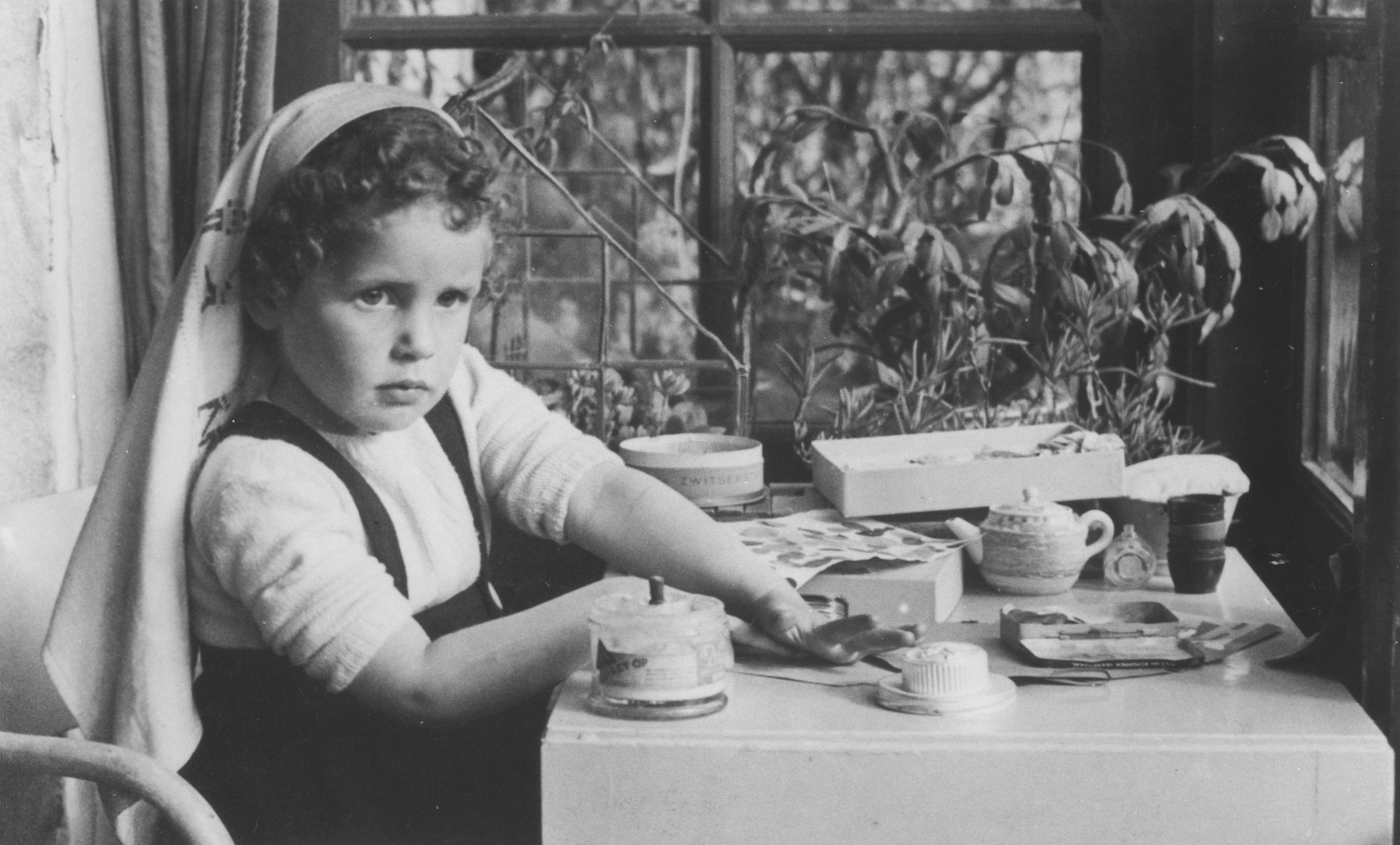 Four-year-old Dorien Grunbaum works on an art project at her home.

Biography
Dorian Grunbaum is the daughter of Manfred and Rita (van Leeuven) Grunbaum. Sbe was born August 28, 1942, in Rotterdam, where her parents ran a grain import/export business before the war. Just prior to the German invasion of Holland, Manfred's parents left for Mexico. He and Rita stayed behind to be with Rita's mother. In October 1941, Manfred was arrested and interrogated, but later released. Thereafter, their lives became increasingly restricted by the imposition of anti-Jewish laws. Fortunately, their situation was ameliorated by the assistance of non-Jewish friends. Dorian was born in August 1942. For the next year the Grunbaums were able to stay in their apartment, though they were in constant fear of being arrested. Their turn came during the final round-up of the Jews of Rotterdam on September 29, 1943. As they left, Manfred leaned on the doorbell of his Dutch neighbor so they would know what had happened. Since Dorien was not on the police list, Manfred and Rita tried to leave her with a Christian woman, but when the baby would not stop crying, they decided to take her with them. The family was sent to Westerbork and remained there for the next several months. Manfred was put to work building roads and taking apart electrical batteries. Rita was exempted from work to care for Dorien. In addition to the regular camp rations, the family regularly received packages from their Dutch friends. While at Westerbork, Manfred's parents in Mexico sent them papers granting them permission to immigrate to Palestine. This exempted the Grunbaums from deportation to Poland, the main source of fear in the camp. However, on February 15, 1944 the family was transferred to Bergen-Belsen to be held for possible exchange for German POWs. Because of their special status, they were kept in the Sternenlager, a separate section of the camp, where the living conditions were more favorable. This situation, however, changed abruptly during the winter of 1944-1945, when Bergen-Belsen was re-designated a concentration camp, and tens of thousands of evacuees from camps in Poland were funneled into it. The amount of available food and the level of sanitation deteriorated dramatically and disease spread throughout the camp. Manfred took sick and could no longer work. Dorien contracted pneumonia and a serious ear infection. On April 9, 1945 the Grunbaums were placed on an evacuation transport headed east, probably to Theresienstadt. They remained on the train for two weeks as it kept changing its route to evade Allied bombs. Finally, on April 23 the German guards disappeared near the town of Tröbitz. By the time of their liberation Rita was extremely sick with typhus. After her recovery a few weeks later, Manfred fell ill with the disease. On June 23 the Red Cross transported the family to Leipzig. From there, they were put on an American ambulance train for Holland, where they arrived on July 1, 1945.