Certificate of discharge from service on the President Warfield (later, the Exodus 1947), issued to Frank Lavine. 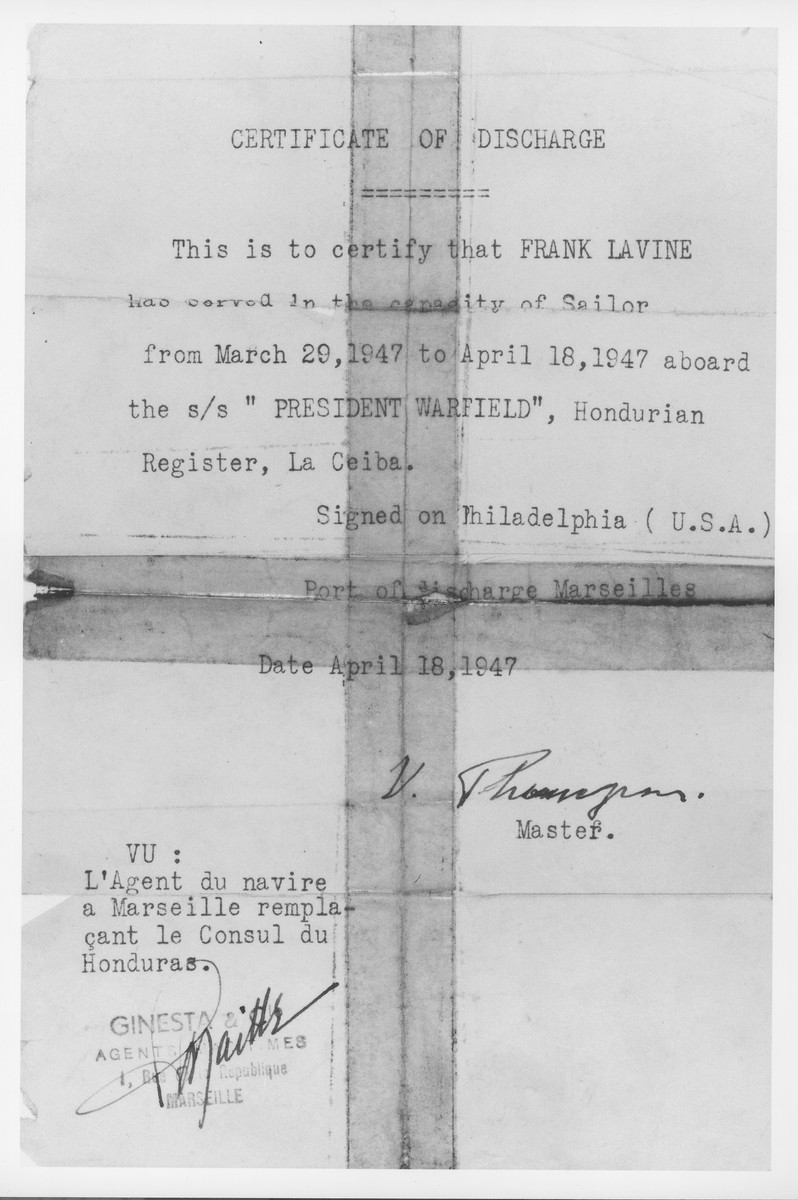 Certificate of discharge from service on the President Warfield (later, the Exodus 1947), issued to Frank Lavine.

[Source: "Poppendorf statt Palastina" (The Haganah Ship Exodus 1947), an online exhibition by Henrik Jan Fahlbusch et al.
Biography
Frank Lavine, the son of Lithuanian Jewish immigrants, was born in the West End of Boston on April 3, 1924. During World War II he served in the Army Air Corps training bomber crews. While attending a special safety engineering school at Chanute Field in Champaign, Illinois, he attended a dance for Jewish servicemen at the University of Illinois, where in conversation he made mention of his interest in recreational sailing. Shortly after the war, Frank was contacted by a Palestinian Jew who had heard of his sailing experience and asked if he would serve on a ship taking illegal immigrants to Palestine. He agreed immediately and was dispatched to Baltimore where he spent the next three months helping to refurbish the President Warfield, an old American steamer that was to become the Exodus 1947. During the voyage to Europe, Frank assisted with navigation, lookout and the fire watch. After the ship arrived in Marseilles, Frank along with the other crew members, was issued discharge papers. At this juncture the vessel became a "black ship" without valid registration and an identifiable crew. The crew, however, remained with the ship as planned, took on their DP passengers and sailed to Palestine. During the seizure of the ship, Frank was injured by British soldiers who beat him over the head. He was captured, held prisoner for four hours and then forcibly transferred to the prison ship, Ocean Vigour. Frank was injured a second time after he refused to disembark upon arrival in Hamburg. Along with ten other Americans, he was taken to the Poppendorf displaced persons camp. Three months later they were smuggled out by the Bricha. For the next several months the Americans moved between a number of DP camps including a short stay at the Hochlandlager and a longer one at Kloster Indersdorf. In the spring or summer of 1948 they departed from the Munich Funkkaserne, after receiving false papers as Jewish DPs. (Frank was given the alias Albert Zaidner.) They traveled by train to France, and from there went their separate ways. Frank returned to the US later that year.