Identification card for Estera Kac Lewinstein (later Esther Livingston), a resident of the Gold Cup displaced persons camp, that certifies she was a former concentration camp prisoner at Stutthof. 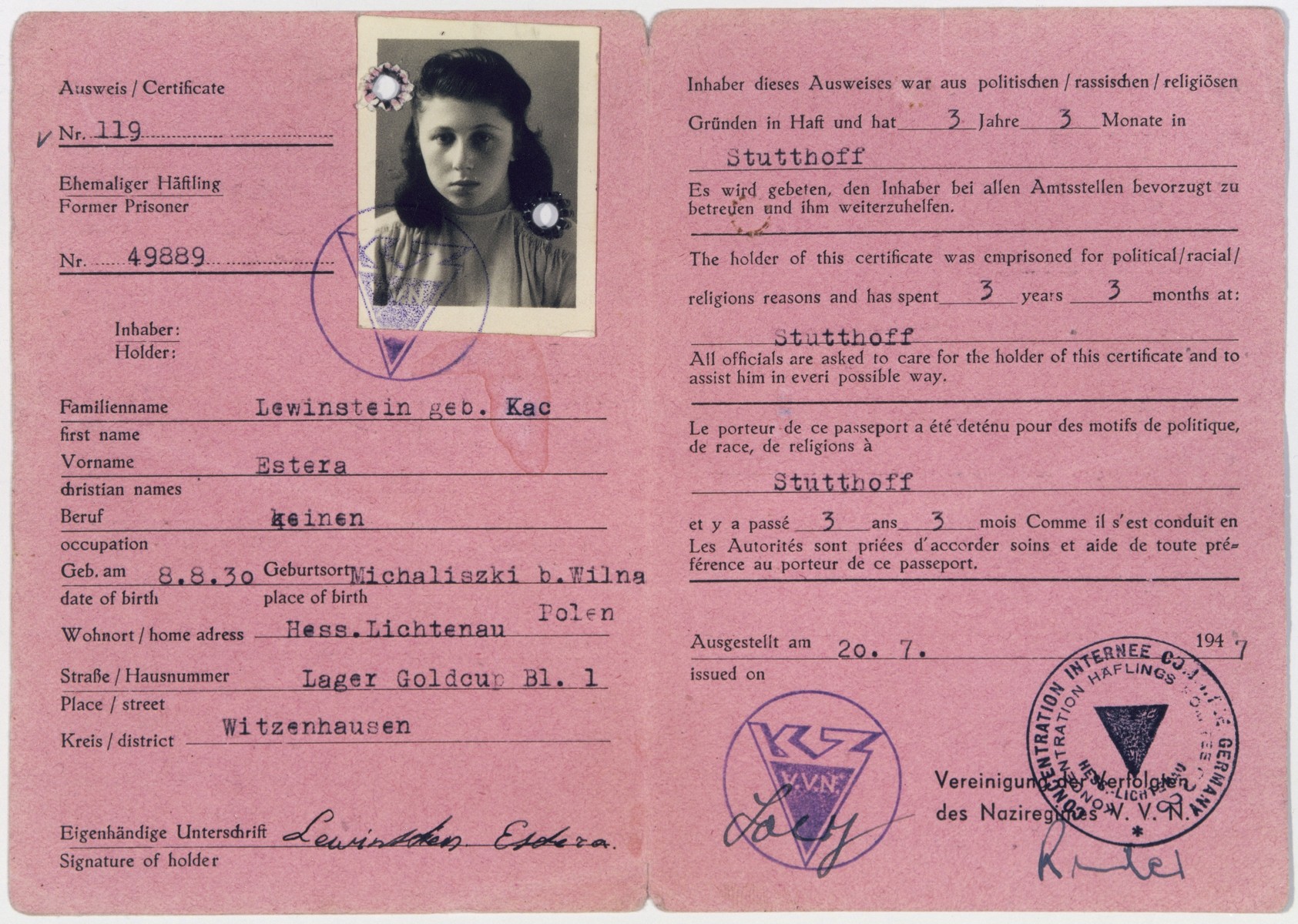 Identification card for Estera Kac Lewinstein (later Esther Livingston), a resident of the Gold Cup displaced persons camp, that certifies she was a former concentration camp prisoner at Stutthof.

Biography
Esther Livingston (born Esther Kac ) is the daughter of Shloime and Chaya (Basel) Kac. She was born August 8, 1930 in Mikhalishki, a small town near Vilna, where her father was a businessman. Esther had two younger brothers, Abram and Moishe. In June 1941 her town was occupied by invading German troops. A few months later the Jewish population was forced to move into a ghetto. At this time Esther's father was sent to a labor camp. In 1942 Esther was deported to the Mielegjany labor camp on the site of a former ranch. The following year the rest of her immediate family joined her there. From Mielegjany, the Kac family was sent to Vievis, where they were housed in a former synagogue and put to work constructing roads. Soon after they were transferred to Ziezmariai (Schischmaren) where they were again housed in an abandoned synagogue and engaged in road work. The family remained together until March 22, 1944 when Esther's mother and brother Moishe were rounded-up and killed during a children's action that encompassed the Kovno ghetto and nearby labor camps. A few weeks later Shloime was also sent away leaving only Esther and her brother Abram. From Ziezmariai the siblings were sent to a prison camp and then to the Panevezys labor camp before being deported to the Stutthof concentration camp. When they arrived on July 19, 1944, Esther handed her brother some of her clothes so that he could disguise himself as a woman and remain with her in the women's camp. He was discovered, however, during a strip search and sent to the men's camp. Esther was able to meet with him on two subsequent occasions at the barbed wire fence that separated the camps, but they were later transferred to different labor camps. Esther was eventually liberated by Soviet troops on March 19, 1945 in Chinow, a sub-camp of Stutthof. After the war she returned briefly to Lithuania to look for her family but discovered that no one else had survived. In 1946 Esther joined a Bricha group that went to Cieszyn, a town on the Polish border with Czechoslovakia. There she joined an Ichud kibbutz where she met her future husband, Leon Lewinstein (later Livingston). Originally from Warsaw, Leon had fled to the Soviet zone of Poland soon after the German invasion. He was subsequently deported to Siberia where he remained for the duration of the war. From Cieszyn, the members of the Ichud kibbutz traveled to Germany, where they spent time in a cluster of small displaced persons camps near Eschwege: Goldcup, Hessisch-Lichtenau, Herzog and Rochelle. After their arrival in Goldcup in July 1946, Leon was appointed to the camp committee and subsequently was hired by UNRRA for a more senior administrative post. Leon and Ester were married on March 17, 1947. The following year they received visas for Canada after Leon qualified under a new Canadian program for skilled artisans. The couple immigrated in 1948 and three years later moved to the U.S.