Group portrait of members of the medical staff of the Turnatoria, the machine shop established by Siegfried Jagendorf in the Mogilev-Podolskiy foundry. 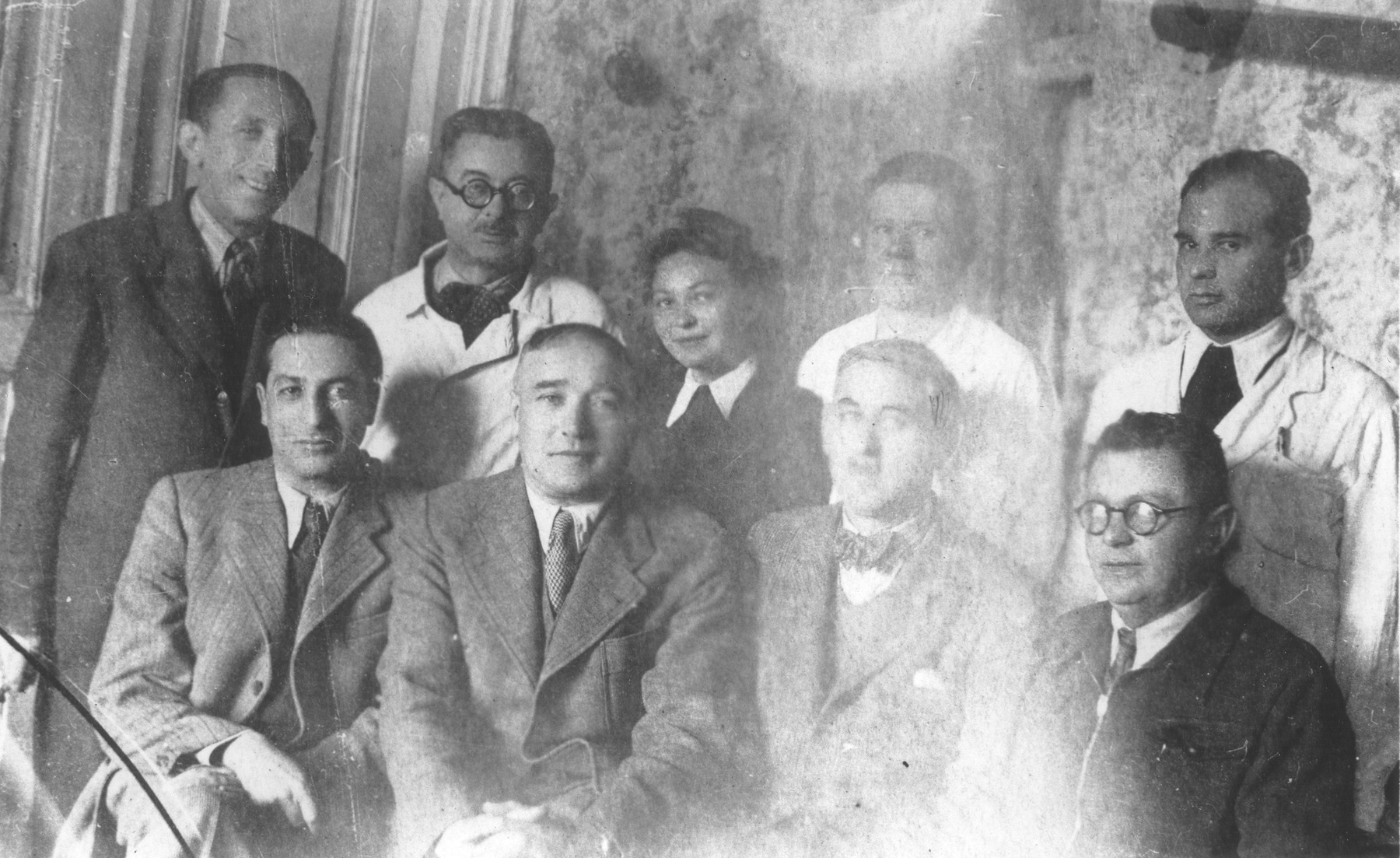 Group portrait of members of the medical staff of the Turnatoria, the machine shop established by Siegfried Jagendorf in the Mogilev-Podolskiy foundry.

Pictured from right to left in the front row are: Dr. B. Budick, Siegfried Jagendorf, Dr. F. Stern, Pinchas Katz. In the second row are: Max Heissmann, [other identifications unclear].

Event History
The Jagendorf foundry (Turnatoria, in Romanian) was a factory established on the ruins of an iron-works in the Transnistrian town of Mogilev-Podolskiy by a group of Jews who were deported by the fascist Romanian government from the provinces of Bukovina and Bessarabia in the fall of 1941. The factory was the initiative of Siegfried (formerly Schmiel) Jagendorf (1885-1970), an engineer, who was deported with his wife from their home in Radauti on October 12, 1941. Immediately upon his arrival in Mogilev-Podolskiy, Jagendorf realized that the only hope of survival for the Jewish exiles was in making themselves indispensable to the local Romanian authorities. Mogilev-Podolskiy had been laid waste by the retreating Red Army during the German invasion of Soviet occupied eastern Europe and the Soviet Union itself in the summer of 1941. Jagendorf saw an opportunity for asserting Jewish usefulness in offering to the local prefect the professional expertise of the exiles to repair the city's destroyed electrical system. In exchange, he asked that permission be granted for a small number of Jewish professionals and skilled workers to remain in the city. (Initially, Mogilev-Podolskiy was closed to Jews.) The prefect was persuaded and allowed Jagendorf to establish a machine shop in the destroyed foundry. Through skillful negotiations, Jagendorf was able to secure permission for 100 skilled Jewish workers and 1100 dependents to remain in Mogilev-Podolskiy to accomplish the task. Within two weeks of the opening of the machine shop, electrical power was restored to the city. This won Jagendorf considerable respect among the local authorities and leverage in securing more projects to keep ever-larger numbers of Jewish deportees productively employed in the city. By mid November 1941, the existence of a Jewish enclave in Mogilev was an accepted fact and a Jewish committee was set up in accordance with regulations issued by Romanian leader Ion Antonescu. Jagendorf was persuaded to assume the chairmanship of the committee, a post he held for much of the ghetto period. Despite severe food, fuel and clothing shortages, several outbreaks of typhus and typhoid and periodic expulsions of groups of Jews to outlying areas, Jagendorf and his administrators managed to expand production and establish and maintain a community apparatus that took care of between 10,000 and 15,000 exiles. By December 1942 the foundry employed 700 workers working in three shifts and was manufacturing farm tools and replacement parts for machinery for the regional economy. In addition to running the foundry, serving as district chief of the Central Office of Jewish Labor, and chairman of the Mogilev Jewish committee, Jagendorf was also the main liaison between the exile community and the Jewish leadership in Bucharest, whom he continually pressured to channel more aid to the Transnistrian Jews. In March 1944, in the face of a rapidly advancing Red Army, Marshall Antonescu finally issued an order for the repatriation of the survivors. (Thousands, however, were caught behind Soviet lines when the Red Army seized Transnistria and were unable to return.) Jagendorf and his wife were repatriated a few days before the official proclamation. They remained in Romania two more years before they were able to join their daughters in the United States in December 1946.

Between July 1941 and June 1942, the Romanian military with the authorization of the government, carried out the deportation of approximately 120,000 Romanian Jews from the provinces of Bessarabia and Bukovina to Transnistria, a 16,000 square mile region in the western Ukraine between the Dneister and Bug Rivers. In late June 1941, shortly after Romania joined Germany in its war against the Soviet Union, Romanian and German army units, assisted by SS killing squads from Einsatzgruppe D, swept through Bessarabia and Bukovina, killing up to 60,000 Jews and forcing the survivors into ghettos and transit camps. The ghettoized Jews were deported to Transnistria in three phases: from July to August 1941, when the Jews of northern Bukovina and Bessarabia, with the exception of those concentrated in Cernauti and Chisinau, were deported; from October to December, when most of the Jews of Bessarabia and Bukovina were expelled; and in June 1942, when the remaining Jews of Bukovina were deported. During the first phase of the deportations Germany still occupied Transnistria, and although the German military authorities permitted the first group of 25,000 Jews to cross the Dneister River, they abruptly reversed their decision, refusing to take in more Jews and expelling those who had been admitted. A cruel tug-of-war ensued between the two military authorities, during which the Jewish deportees were marched in circles for weeks without food and shelter. Finally, on August 30 the Germans ceded Transnistria to the Romanians, and on September 12 the deportations resumed. The Jews were marched to the Dneister River in groups of 1,500. Though some deportees were able to procure wagons or carriages, the conditions were nonetheless cruel. The exiles received little food or water and suffered from exposure to the elements, ruthless beatings and random killings along the way, resulting in the death of thousands. The second phase of the deportations was more organized than the first and exploited the economic resources of its victims. The Jews were robbed of their possessions before they were expelled, and in Cernauti, where it was decided that 20,000 would be saved, exemptions were sold to those who could afford them. During this phase of the deportations some groups were deported by train and carriage, while others marched on foot. Again, thousands died or were shot along the way. In the final phase, which began on June 7, 1942, 4,000 formerly exempted Jews from Cernauti were deported by cattle car. The Romanians had no plans for the resettlement of the thousands of Jewish deportees, and made no provisions for their shelter or sustenance once they crossed the Dneister. They sought only to drive the Jews further to the north and east. Ultimately, a number of makeshift camps and many ghettos were established by the Romanian authorities. In some of them the appointed Jewish committees were able to set up self-help institutions such as orphanages, soup kitchens and hospitals to assist in their survival. The winter of 1941-1942 in Transnistria was severe, and thousands died from exposure, starvation and disease. That winter thousands of other exiled Jews were massacred by Romanian troops with the assistance of Ukrainian auxiliaries at camps in Bogdanovka, Domanevka and Akhmetchetkha. The situation of the Jewish exiles started to improve toward the end of 1942 when the first shipments of aid from Jewish communities in the Regat (Romania in its pre-1918 borders) were received. This was followed by a more sustained aid effort provided by the American Jewish Joint Distribution Committee and several other international organizations. In April 1943 the papal nuncio in Bucharest, Archbishop Andrea Cassulo, visited Transnistria. After the German defeat at Stalingrad in early 1943, the Romanian Jews became a bargaining chip for the Antonescu regime, which now began to consider the repatriation of certain categories of Jews from Transnistria. However, it was not until December 20, 1943 that the first group of Jews, 1,500 from Dorohoi, left Transnistria. Several months later, 1,846 Jewish orphans were transported through Romania for resettlement in Palestine. With the Red Army closing in on Transnistria in mid March 1944, Antonescu finally authorized the repatriation of the surviving 50,000 deportees.