Identification card issued to the Jewish DP child Horst Taucher indicating that he was a victim of fascism. 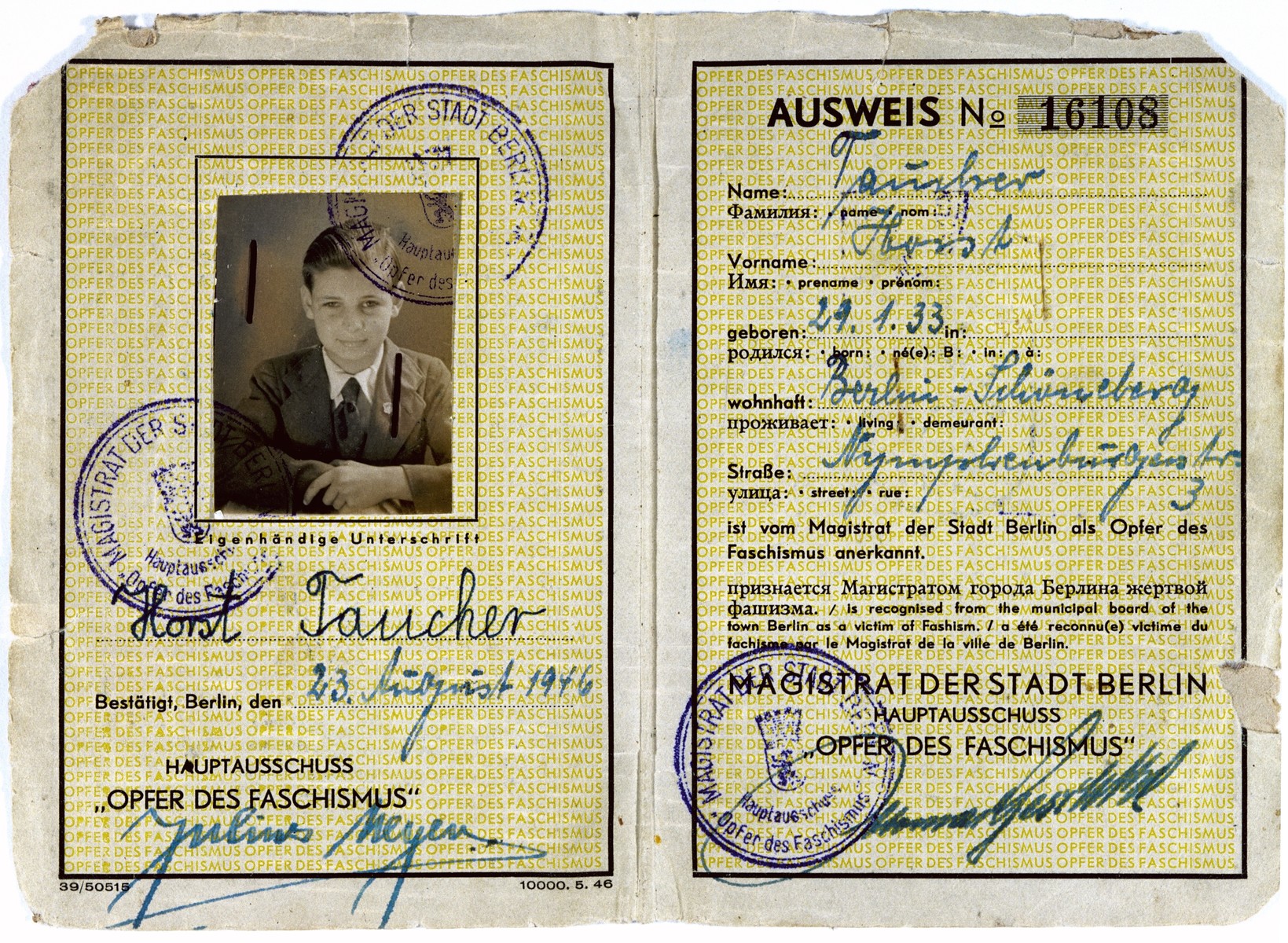 Identification card issued to the Jewish DP child Horst Taucher indicating that he was a victim of fascism.

Biography
Henri (now Henry) and Horst (now Fred)Taucher are the sons of Julius and Therese (Gerstel) Taucher. Both were born in Berlin: Henri on January 3, 1932, and Horst on January 29, 1933. Their father had moved to Germany from the United States with his family when he was 19. In Berlin, Julius worked as a tailor and had a shop at Leibnitzstrasse 27 in Charlottenburg. During the Kristallnacht pogrom of November 9-10, 1938, his business was vandalized and subsequently taken away from him altogether. Julius was later pressed into forced labor, which continued until his arrest in 1943. A few days later he was deported to Auschwitz, where he was killed. After his arrest the boys and their mother went into hiding and assumed the names of people who had perished during previous air raids on the city. Ironically, the family found assistance at this juncture from a committed Nazi party member, Gertrude Nölting, who happened to be the German midwife who delivered Horst. Shortly before the end of the war, on April 15, 1945, Horst was picked up by the Gestapo and sent to Dachau. However, during an air raid that occurred on April 19, he managed to escape from the train and get back to Berlin. Horst rejoined his family at the Anhalter Bahnhof [train station], the meeting point they had selected in advance in the event of their separation. Tragically, a short time later, their mother was shot and killed when she was caught in the crossfire between German and Russian troops on the streets of Berlin. For the next year the Taucher boys lived with Gertrude Nölting, who never renounced her belief in the ideals of Nazism and remained convinced that Hitler was ignorant of the Final Solution. With the assistance of Werner Nathan, an American Jewish soldier who was stationed in Berlin, arrangements were made for their immigration to the United States in 1946 under the sponsorship of the American Jewish Joint Distribution Committee.