Class portrait of the Jewish high school in Amsterdam. 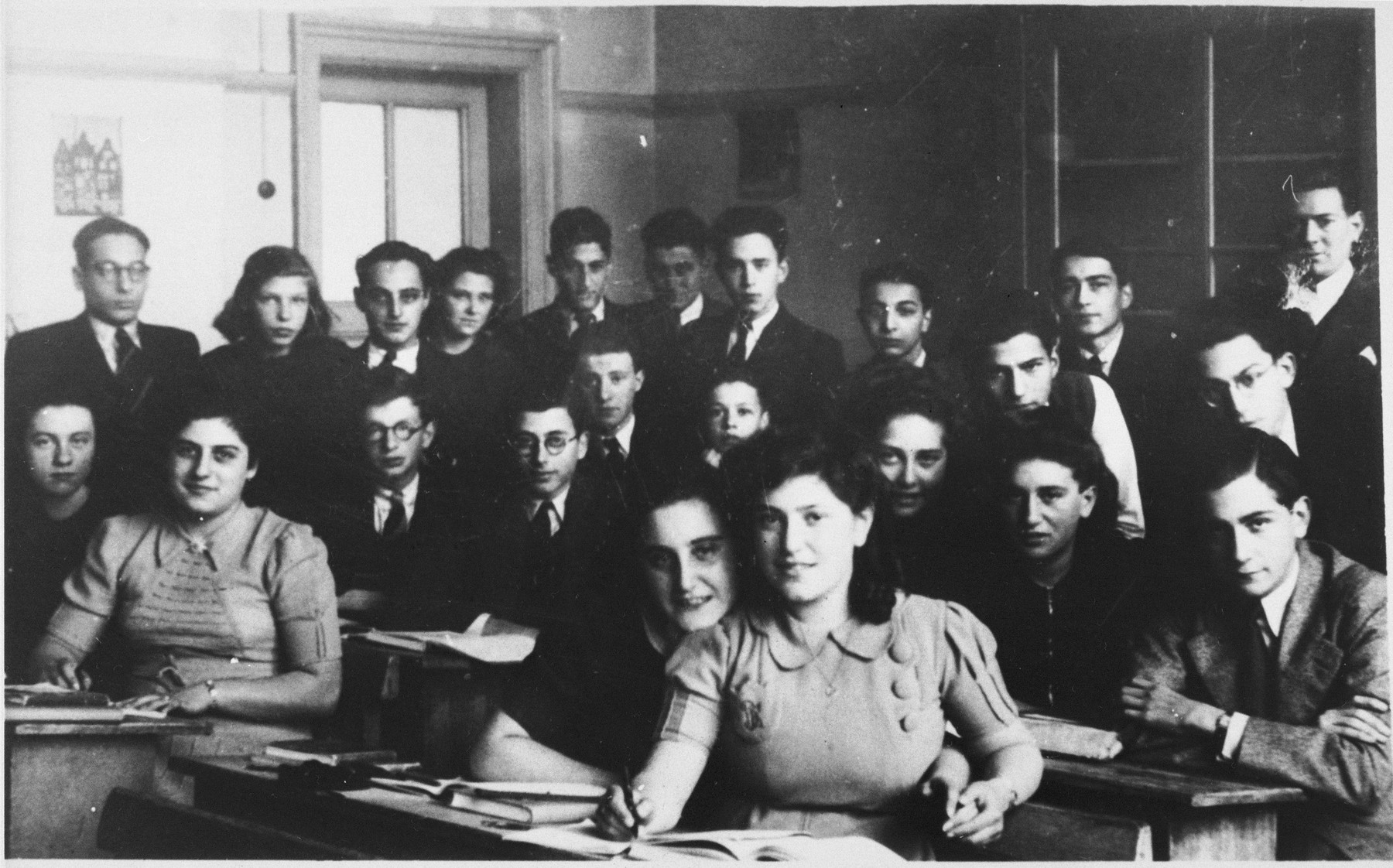 Class portrait of the Jewish high school in Amsterdam.

Bloeme Emden is pictured in the front , right.

Biography
Bloeme Evers-Emden (born Bloeme Emden) is the daughter of Emanuel Emden and Rosa Emden-DeVries. She was born on July 26, 1926 in Amsterdam where her father, a socialist, worked as a diamond cutter. Her younger sister, Via Roosje was born on May 29, 1932. For the first years of the war, the Emden family was able to remain together in Amsterdam because Emanuel's skills were in high demand, but in July 1942, Bloeme received a letter ordering her deportation. Emanuel went to the Zentralstelle Fuer Juedische Auswanderung where he met with a sympathetic German who crossed out the order and stamped "gesperrt" releasing Bloeme from deportation. This enabled Bloeme to return to the Jewish high school in September. Throughout the course of the year, the school size shrank with increasing deportations of Dutch Jews. Upon Bloeme's return only half of the students turned up, and by the end of the year, only three children were left in her class. Bloeme was the only student remaining when it was time for final oral exams three weeks later. In late May 1943, on the first day of oral examinations, Bloeme's boyfriend, who was half-Jewish, warned her that the Germans were looking for her. Bloeme immediately went back to the school and asked to take all twelve of her exams in one day so that she would be able to graduate from high school. She took the exams and received her diploma that day. After her exams the Germans for her and brought her to a building where all of Amsterdam's Jews assembled. Her mother had advised her to try to avoid being registered, and Bloeme somehow outwitted the people working there and managed to enter the building without being registered. After a few days, an acquaintance told her how to escape. At 4:00 a bell summoned children under fourteen to assemble. Bloeme went to the hall, and after the children assembled, she crossed the street with them. It was somewhat of a problem since Bloeme looked much older than the other children, but luck was with her. Bloeme spent the night in the children's crèche and the next morning she walked from there to the home of Christian friends. However, the friends were members of the underground, and they feared that if they were seized Bloeme would also be arrested. Bloeme then moved to as many as 15 or 16 different hiding places over the course of the next year, working in exchange for shelter. These included an old age home in Amsterdam that hid a number of Jews. The home's director knew Bloeme was Jewish, and after the Germans raided the home in 1944, she warned Bloeme to leave immediately. After that, Bloeme was sent to work as a maid for a widow and her son in Rotterdam who did not know she was Jewish. However, when the family left for vacation, Bloeme had nowhere to stay. She returned to the people from the underground, but while she was there, she was arrested and sent to Westerbork. She was deported to Auschwitz on September 3, 1944, and in October 1944, she was sent to the labor camp of Liebau in Upper Silesia. She was liberated on May 8, 1945 by the Soviets. After liberation, she and small group of friends began walking west and arrived back in The Netherlands six weeks later. None of Bloeme's immediate family survived. They all were deported to Sobibor where they perished.