Studio portrait of Denise and Jean-Claude Bystryn in 1942 before they went into hiding in Cahors. 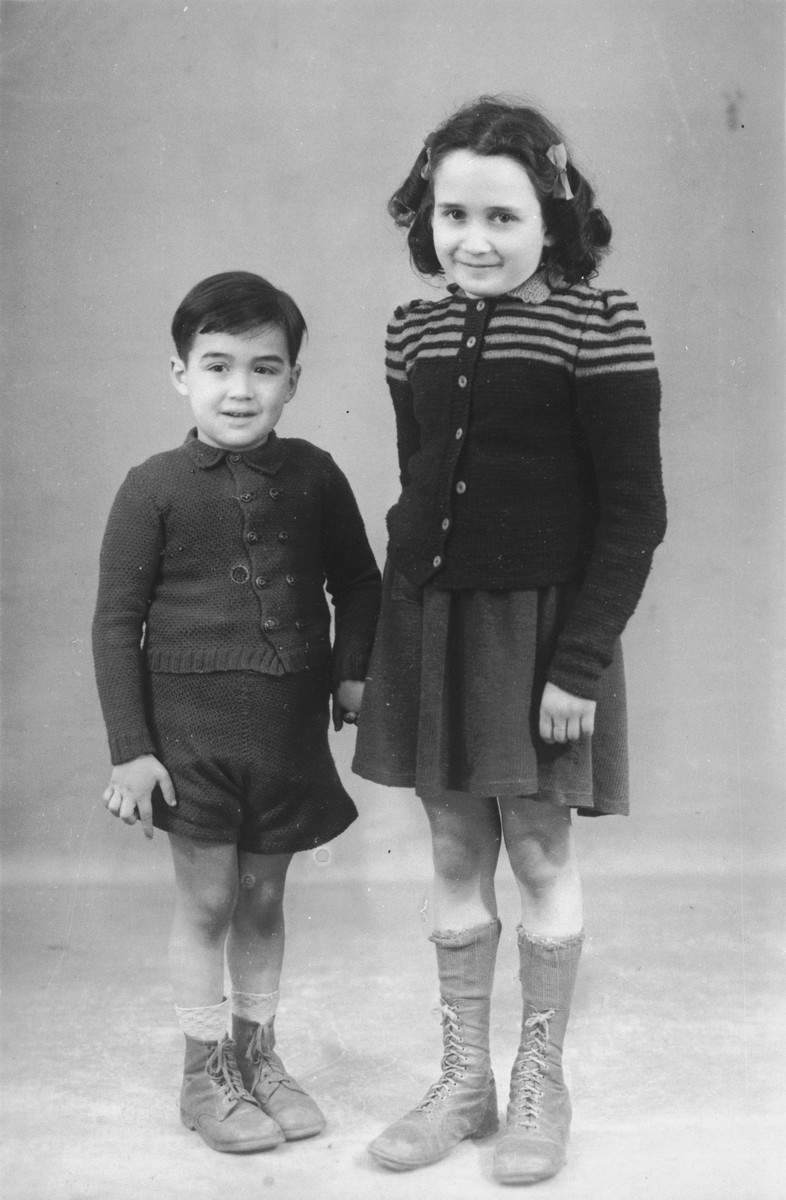 Studio portrait of Denise and Jean-Claude Bystryn in 1942 before they went into hiding in Cahors.

Biography
Denise Kandel (born Denise Bystryn) is the daughter of Iser Bystryn and Sara Wolsky Bystryn. Denise was born in Paris, France on February 27, 1933; her younger brother Jean-Claude was born on May 8, 1938. Iser, born on December 12, l901, in Drohiczyn on Bug immigrated to France in the mid-1920's to study at the University of Caen. Though he was trained as a rabbi, he wanted to study math and engineering and became a mechanical engineer. Before the war, he was the chief engineer in a factory that manufactured dump trucks. Sara was born in Brest-Litovsk on December 18, 1906. In the late 1920s, she came to Paris to study. She then had to work and learned how to make hats and corsets. She and Iser married in 1930. Before the start of the war, the family lived in Colombes, a suburb of Paris, and Denise attended the Ecole des Filles elementary school. The family never went to synagogue, and Denise received presents at Christmas. Though the parents were fluent in French, they spoke Yiddish among themselves. On May 10, 1940, Germany invaded France and almost exactly one year later, on May 14, 1941, Iser Bystryn was arrested as part of the first round-up of foreign Jews and sent to the Beaune-la-Rolande internment camp. Denise, Jean-Claude and their mother remained in Colombes but went to visit Iser in the camp about once a month. Sara communicated with her husband via letters and occasional packages. She once sent him a letter concerning a potential escape plan concealed inside a cake. Thoguh Sara tried to convince her husband to escape, he initially was hesitant to do so as he was in charge of one the camp barracks. After a while, some French police came to the apartment looking for Iser, and one of them signaled to Sara to leave. She realized that Iser had escaped and left that night with her children. Eventually she reached Saint-Céré in the Lot department. After Iser escaped from Beaune-la-Rolande, he made his way to Cahors, the capitol of the Lot. Eventually the family reunited in Cahors. Iser developed an ulcer and was hospitalized for six weeks. The doctor who treated him was in the resistance. Knowing that Iser was a Jew, he kept him in the hospital longer than necessary in order to protect him. He also arranged for Denise and Jean-Claude to be placed in the local convent. Jean-Claude, who was four-years-old at the time, was only able to spend the days there and stayed with a nearby family at night. Because he was a boy, after Jean-Claude turned five, he could no longer stay in the convent. A teacher in the convent, who later became a nun, arranged for him to live with her aunt and uncle in a very small village, also in the Lot. Denise's father hid in various places in Saint-Céré and finally with a farmer. He worked for the Jewish underground making false papers. Sara remained in Saint-Céré and survived by moving around, sometimes living in the woods. She traveled to surrounding farms and exchanged farm products for food with local shopkeepers. Denise remained in the convent until April 1944 under her family name Bystryn. Although she learned the Catholic prayers, she never took communion and was not forced to convert in order to do so. Her parents thought it would be safer for her to be baptized so she could partake of the weekly communion and not appear different from the other children. The nuns would do this only with explicit permission. Sara traveled for 80 kilometers at great personal danger to give her signed permission. However, when she arrived at the convent, she could not go through with it. She turned around and left. In late spring of 1944 someone in town warned the teacher who had arranged for Jean-Claude's care that Denise was in danger. The teacher arranged for her to go to her parents' home near Toulouse. Denise remained there for about eight weeks until the end of the war. For a while after the war, Jean-Claude remained with his adopted family, and Denise very briefly lived in a transitional home before returning to live with her parents. After the war, Iser went to work in the same truck factory where he had worked before the war. Although the factory owner had been a collaborator, he paid Iser part of his salary throughout the war and sent someone to deliver these funds to Sara. The Bystryns immigrated to the United States in 1949. Denise went on to receive her PhD in sociology from Columbia University. In 1956, she married Eric Kandel, a Viennese émigré who later won the Nobel Prize for Medicine or Physiology in 2000.