Portrait of the Genchik family in Riga, Latvia. 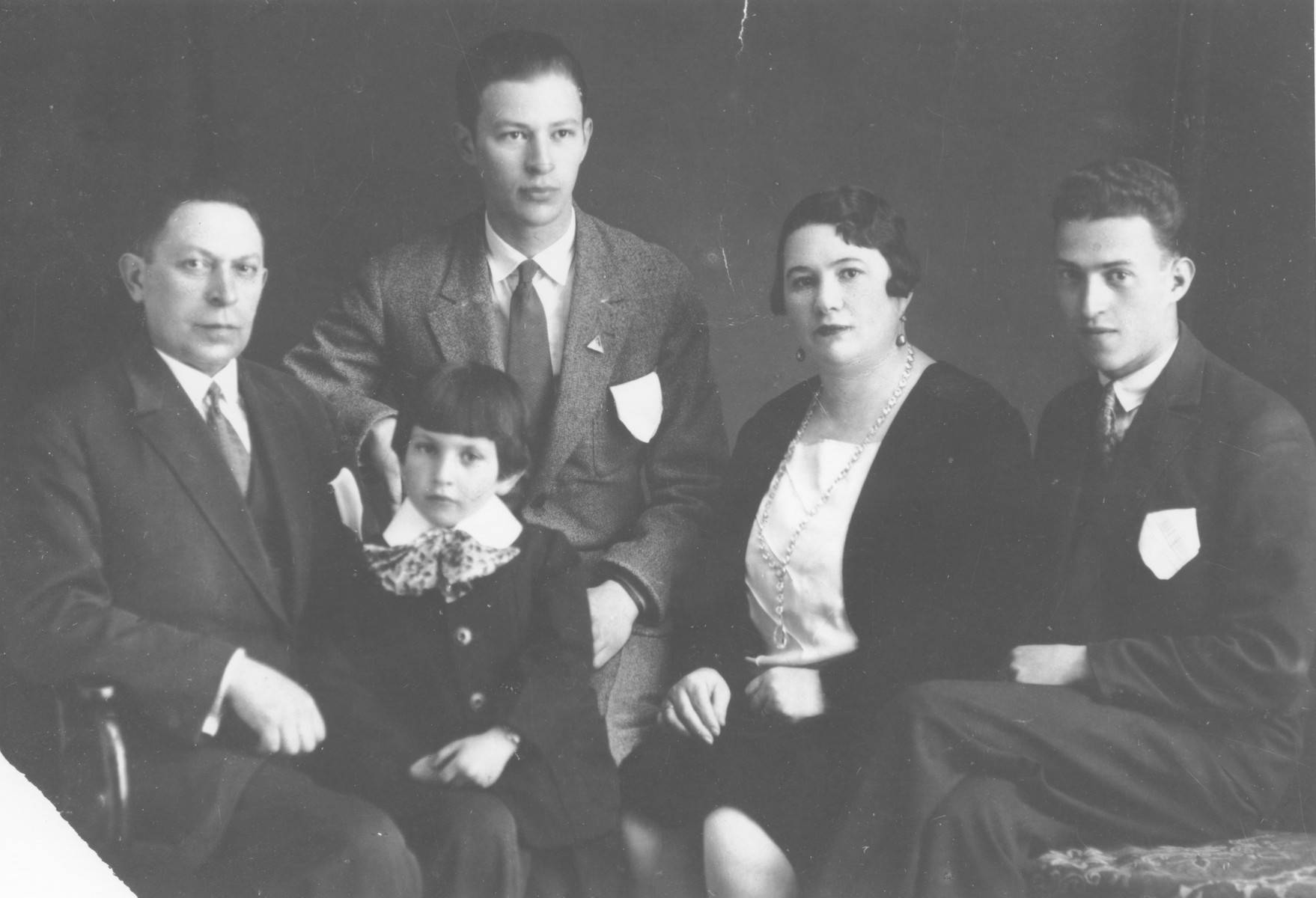 Portrait of the Genchik family in Riga, Latvia.

Pictured are Gdaly Hirsch and Rocha Zelda Genchik and their three children, Israel, Abram and Mordkha.

Biography
Mordkha Genchik is the son of Rocha Zelda and Gdaly Hirsch Genchnik. He was born in December 1923 in Riga, where his father was a salesman and his mother, a hairdresser. To earn extra money Rocha and Gdaly worked in the evenings sewing gloves. Mordkha had two older brothers, Israel (b. 1909) and Abram (b. 1911). In 1933 after the Nazis came to power in Germany, ant-Semitism began to flourish in Latvia. When Mordkha started being harassed at his public school, his parents moved him to a Hebrew language school called "Ivrit" in Riga. After graduating in 1939, he enrolled at the Jewish vocational school and continued there after the Soviet takeover of the country. In June 1941, right after the German invasion, Mordkha was evacuated to Russia with his entire school. His two married brothers also got away, but their plans to evacuate the rest of the family (their parents, wives and children) fell through at the last minute when they were unable to obtain a truck to transport them. In mid-August these family members were forced to relocate to the newly established ghetto in the Moscow quarter of the city, which was sealed later that fall. Mordkha's father worked in the ghetto sewing gloves. In the first week of December, 1941 more than 25,000 inhabitants of the "large ghetto" that were taken out to the Rumbula Forest (some 5 miles out of town), and shot to death alongside large pits that had been prepared in advance. Mordkha's mother and many other relatives were among those killed. Mordkha's father, who was working as a skilled craftsman, was temporarily spared. Mordkha and his schoolmates were taken by train to a kolkhoz (collective farm) near Yaroslavl. There, they were put to work in the fields, for which they received only food and shelter as compensation. In the fall of 1941 Mordkha fell ill with dysentery and had to be hospitalized. Shortly after his recovery he was sent to a vocational school in the city of Kostroma, where he was treated with exceptional kindness by several Russian women on the staff of the school. In 1942 Mordkha was drafted into the Soviet army and assigned to the Latvian regiment. There he found his brother Israel. During their brief meeting, Mordkha learned of his brothers' failure to evacuate the rest of the family from Riga. The day after their reunion, Israel was sent to the front, where he was killed a few weeks later. Mordkha was deployed soon after. He narrowly escaped with his life in 1944 when an artillery shell exploded next to him. Following his hospitalization and recuperation, Mordkha was sent to a unit working behind the front lines. Unbeknownst to Mordkha, his other brother, Abram, had been drafted and sent to the front even before he and Israel. Only later did he learn that Abram had been wounded and returned to Riga in 1944. The two brothers were the only members of their extended family to survive. Their parents were killed during the final liquidation of the Riga ghetto in November 1943. After the conclusion of the war Mordkha continued to serve in the Latvian regiment. Among his duties was the care of the cemeteries of fallen soldiers and the sites of Nazi atrocities in the Rumbala Forest (including the mass grave where 7 members of his own family lay buried). Mordkha became a career soldier, eventually rising to the rank of lieutenant colonel, and was the recipient of numerous medals and citations. Despite his distinguished service, he suffered decades of discrimination because of his Jewish origins. Prolonged efforts to emigrate were finally crowned with success in 1984 when Mordkha and his family arrived in the U.S. and settled in New Jersey.

[Source: Genchik, Mordkha. "A Story of a Soldier and a Survivor."