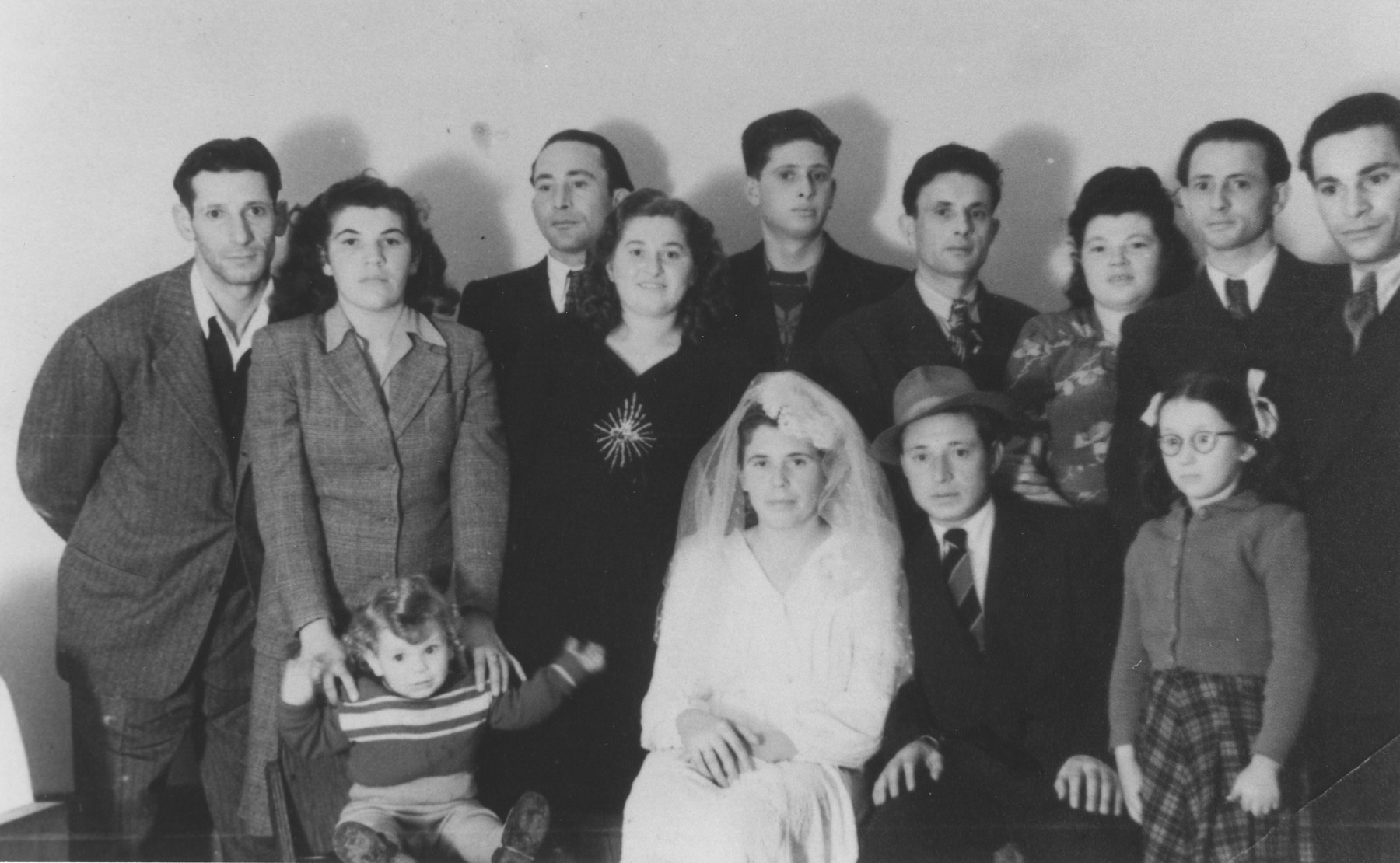 At least five different brides wore this wedding dress in the Bari DP camp. Etta's sister Tauba (Falakovics) Schechter, her husband Isidor and daughter Miriam are pictured on the left.

Biography
Gail Gepsman Mermelstein is the daughter of Pinkus and Etta (Falakovics) Gipsman (later Gepsman). Pinkus was born in Kielce in 1927 and had seven brothers. On June 18, 1940, nine months after the German invasion of Poland, his family was taken to the ghetto. Pinkus later escaped by digging under the fence. He fled to a nearby farm where he hid briefly in exchange for tending the farmer's cattle. However, after the Germans threatened to kill any farmer who harbored Jews, Pinkus was forced to leave. He then went to Czestochowa, where he was put to work at the HASAG munitions factory, manufacturing shells and bullets. During the course of his forced labor, he was burned by hot oil which left permanent scars on his body. After a year-and-a-half in Czestochowa, Pinkus was deported to Buchenwald, where he first worked in a munitions factory, and later in a warehouse sorting the clothing of prisoners who had perished. Towards the end of the war Pinkus was transferred to Flossenbuerg for a brief period. He was then put on an evacuation transport for Mauthausen. After seventeen days aboard a freight train without adequate food or water, Pinkus was one the few prisoners who remained alive when the train arrived. He was finally liberated at Mauthausen by the American army on May 5, 1945. After several months of recuperation, he made his way to the displaced persons camp in Bari, Italy where he met and married Etta Falakovics.

On April 15, 1944 Etta Falkovics, her parents, grandfather, four brothers and one sister were taken from their home in Velky Berezny to a ghetto in Hungarian-controlled Uzhgorod located in a former brick factory. The family stayed in the ghetto for about six weeks before being deported to Auschwitz in closed freight cars. The family was separated upon arrival, and Etta never saw her brothers, parents or grandfather again. She was tattooed with the number A-16472, placed in camp C and assigned work in the kitchen. Later she was reassigned to hard labor as a railroad hand, lifting heavy rails. Etta was placed on a forced march to Germany during the evacuation of Auschwitz in mid January 1945. She was taken to the Bergen-Belsen concentration camp, where she was liberated by the British in April 1945. After her release Etta went back to Czechoslovakia and found her sister Tauba. With the help of the Bricha, Etta made her way to the Bari displaced persons camp in Italy, where she met and married Pinkus Gipsman. After immigrating to the US they settled in Fort Wayne, Indiana where Etta had an uncle.