Henryk Eichenholz inspects an article of clothing made in the Julius Madritsch clothing workshop where he worked as the manager. 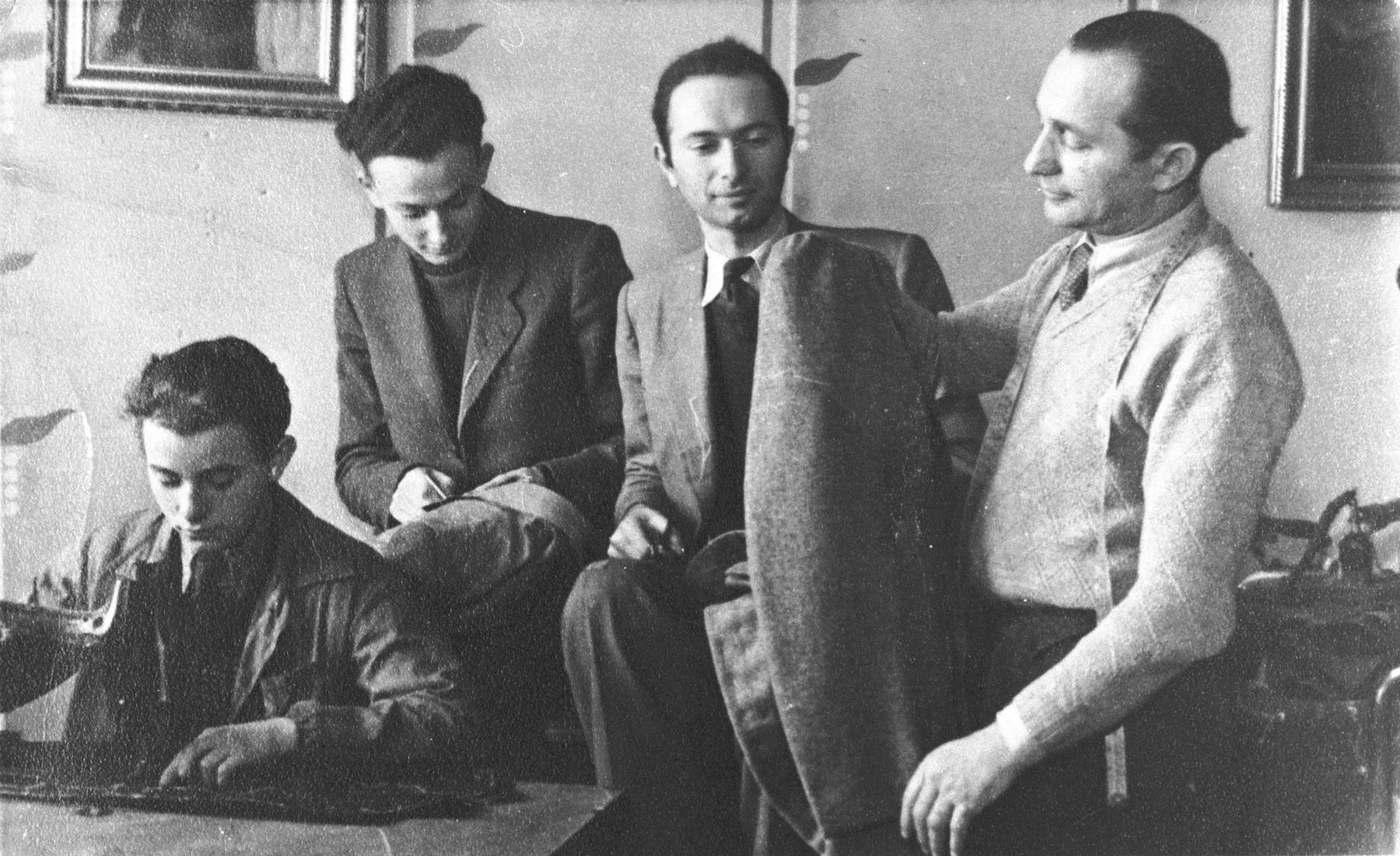 Henryk Eichenholz inspects an article of clothing made in the Julius Madritsch clothing workshop where he worked as the manager.

His son Bronek is working on the machine.

Biography
Dziunia Goop (born Dziunia Eichenholz) is the daughter of Lusia Sara Malka Eichenholz and Henryk Hirsch Eichenholz. She was born on December 31, 1928 in Krakow where her father owned a men's custom-made clothing shop. Her older brother Bronislaw (Bronek), born in 1925, studied the violin and performed as a soloist with the Moniuszko Conservatory Orchestra. Dziunia studied dance and piano at the conservatory. From September 1939 through March 1941 the family lived in Krakow and also in hiding in the nearby town of Myslenice. During this time, Lusia and her two children were arrested for not having proper identification and imprisoned in the Montelupich prison in Krakow. Henryk was spared arrest since he was out of the apartment at the time. Soon afterwards, he was able to obtain an identification card and arrange for his family's release. In March 1941 the family was forced into the Krakow ghetto in Podgorze where they shared a two-room apartment and kitchen with nine members of the Goldstein family. Two years later, the family was sent to the Plaszow concentration camp. Throughout this time, Henryk was head of Julius Madrisch's tailor shop and made custom-made suits for Oskar Schindler, Hans Frank and Amon Goeth. Henryk was issued a special permit to leave the ghetto with a guard and go up to Wawel Castle to take measurements and deliver finished suits. While on these errands, Henryk managed to visit Maria Cichon, a friend and housekeeper of the Eichenholz family, who owned a grocery store that was on the way to Wawel. Maria bribed the guards in order to allow Henryk to stop in and see her, and sometimes she was also able to give the family some food. Due to Julius Madrisch's close relationship with Oskar Schindler, the family was originally supposed to be on Schindler list, but somehow their names were removed. In January 1945, during the liquidation of Plaszow, the family was sent on a death march to Auschwitz concentration camp. Later that month, Dziunia and Lusia were sent both by foot and in open trains to Bergen-Belsen. Henryk and Bronek were sent from Auschwitz to Flossenbuerg and then to Dachau where they were liberated. Dziunia and her mother were liberated in Bergen-Belsen on April 15, 1945, but they remained there for the next three months. Dziunia was hospitalized with typhus, and Lusia stayed with her and worked in the hospital as a nurse. In July 1945, Dziunia was sent on a Red Cross transport from Bergen-Belsen to Lund, Sweden where she was hospitalized for jaundice, tuberculosis and skin problems. Two days after she and Lusia departed, Henryk and Bronek arrived in Bergen-Belsen looking for them. During this time, Dziunia was placed in quarantine due to her illness. An American gentleman, who had visited a number of displaced persons camps, came to the hospital with letters and notes from survivors looking for their family. Among these was a note from Bronek searching for his sister and mother. The family began to correspond, through the efforts of Dr. Schwartzbart of the World Jewish Congress, and eventually reunited in Torshalla, Sweden in December 1945. In 1955 Dziunia married, and in March 1957 she and her husband moved to the United States. Lusia and Henryk followed them to California in December. Bronek remained in Sweden and he performed throughout Europe as a professional violinist. During one of his visits to Maria Cichon, Henryk managed to smuggle out the family's photographs. She kept them with her and returned the photographs to Dziunia and her mother after their arrival in Sweden.