Studio portrait of a Jewish mother and son in Mukachevo, Czechoslovakia. 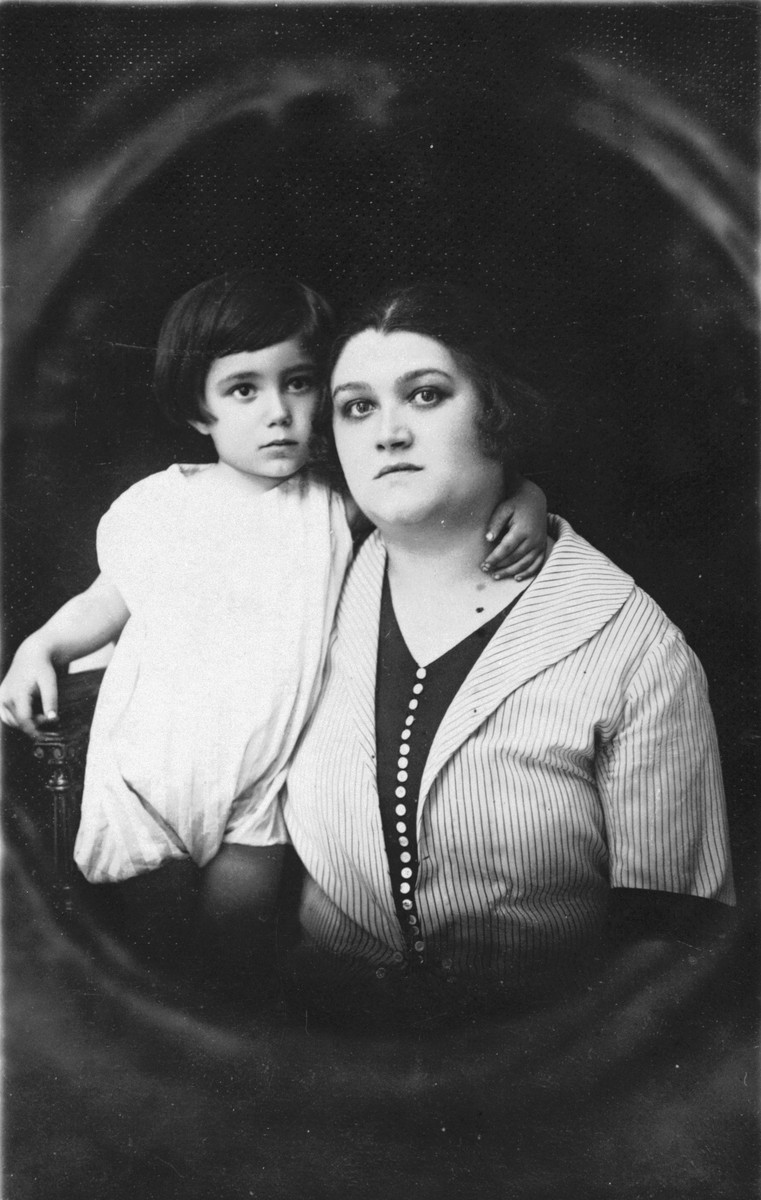 Studio portrait of a Jewish mother and son in Mukachevo, Czechoslovakia.

Pictured are Zeni Farbenblum and her son, Rudy.

Biography
Rudy Fabian (born Rudy Farbenblum) is the son of Ellis and Zeni Farbenblum. He was born in 1922 in Chust, Czechoslovakia, and grew up in Mukachevo, where his father ran an import-export business. Rudy had one sister, Pessi (b. 1932). He attended Czech primary schools, but was transferred to a Tarbut Hebrew high school, so that he would not have to attend classes on Saturdays. By the time he graduated, Rudy spoke nine languages fluently including Czech, Hebrew, Yiddish, English, German, and Hungarian. After completing high school in 1941, Rudy went to Budapest to attend medical school. He was one of six Jewish students admitted to a class of 100. However, after repeatedly being beaten by anti-Semites, Rudy decided to return home after two weeks. In 1942 he was sent to a labor camp, where he spent the next three or four months cutting timber. He was then transported by sealed cattle car to Uzsok on the Hungarian-Polish border, where he worked cutting trees and shoveling snow. In the spring of 1944 Rudy bribed a guard in order to receive a 48-hour pass to go home. This visit was the last time he saw his family. A few days later, they were confined to a ghetto in a former brick factory. On the day of their deportation they were marched out of the ghetto/factory under the supervision of a group of Hungarian guards. One of them had been a classmate of Rudy’s and in the past had eaten frequently at the Farbenblum home. Since Rudy’s grandmother was having trouble walking, his parents asked the guard if he would assist. He responded by savagely beating Zeni. Rudy’s parents, grandparents and sister were all killed upon their arrival at Auschwitz. From Uzsok, Rudy’s labor battalion was sent to Kosice in East Slovakia. After learning of Rudy’s facility with languages, the Austrian officer in charge of the group employed him as a personal translator, and often gave him supplemental rations. Some time later, rumors (which later proved to be false) spread that the war had ended in Hungary. Rudy and his friends thus decided not to go to work. They were soon discovered by a new lieutenant, who decided to hang them for their insubordination. They were saved at the last minute by the Austrian officer, who happened to be driving by and ordered that they be taken down. The lieutenant was furious but had to obey. He returned Rudy and the other Jews to the camp, but for the next 10 days, after the completion of a full day’s work, Rudy and his friends had their hands and feet bound and were suspended for two hours per day. Subsequently, Rudy’s labor battalion was marched in the direction of Austria. While en route they joined a second battalion which included Rudy’s paternal uncle Morris, and for the duration of the war, Rudy remained with him and a childhood friend named Alex. They were given little food, but Rudy managed to steal some sugar beets and found some snails to sustain the group. After being put to work building bunkers in Szombathely, they were taken to Austria. From the end of 1944 or beginning of 1945 Rudy was sent to a number of Austrian concentration camps including Mauthausen, Melk and Gunskirchen, where he was tasked with removing corpses by carrying them draped over a pole. After his liberation by the Americans on May 4, 1945, Rudy returned to Mukachevo. However, when he arrived at his home, armed Soviet soldiers prevented him from entering. Rudy then went to Prague, where he spent the next eight months recuperating in a hospital. In August 1946 he immigrated to the U.S. after receiving papers from his Uncle Morris.