John Stanley Grauel poses on the deck of the SS Marine Carp with friends and fellow journalists, while on his way back to the United States after serving on the crew of the Exodus 1947. 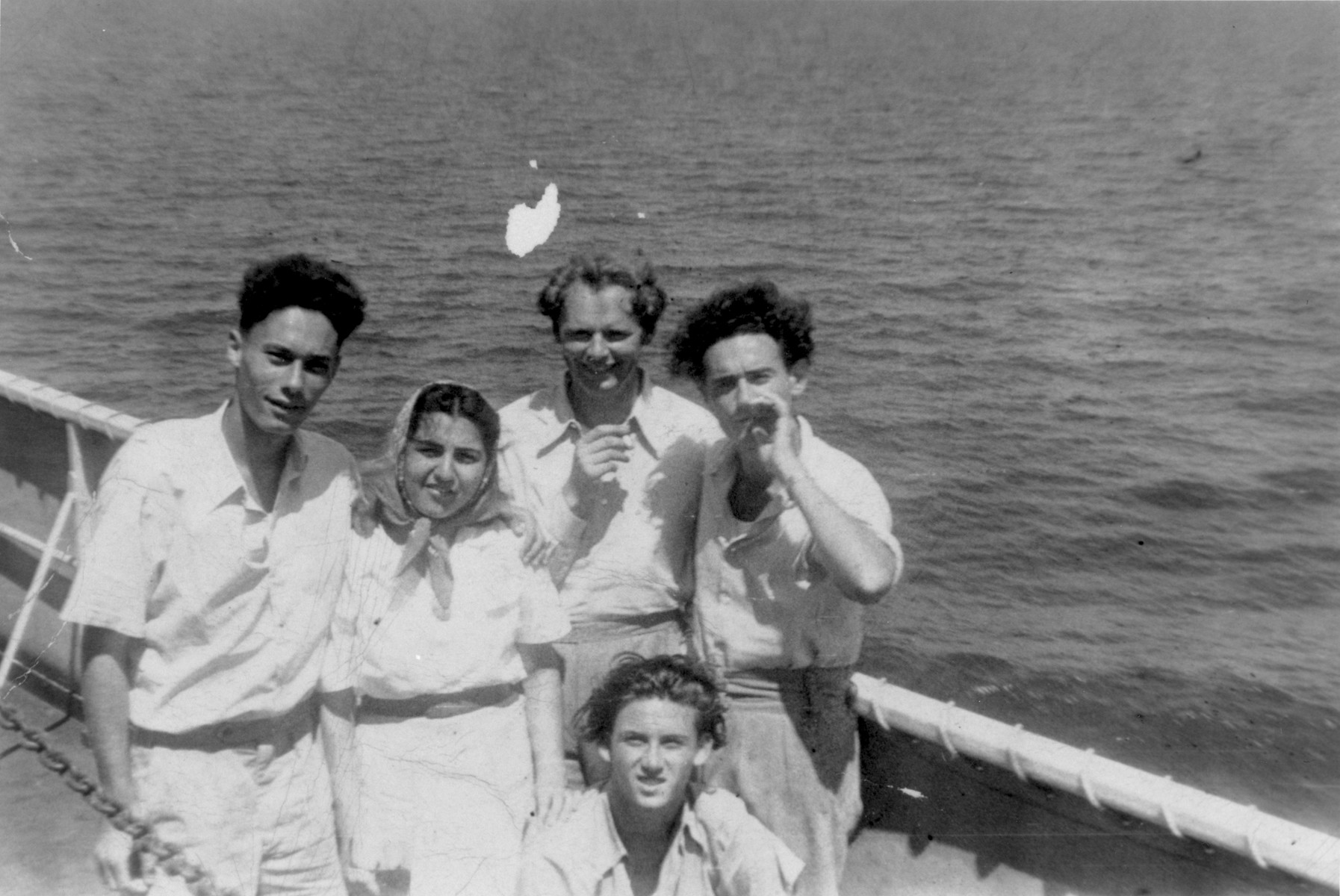 John Stanley Grauel poses on the deck of the SS Marine Carp with friends and fellow journalists, while on his way back to the United States after serving on the crew of the Exodus 1947.

[Source: "Poppendorf statt Palastina" (The Haganah Ship Exodus 1947), an online exhibition by Henrik Jan Fahlbusch et al.
Biography
John Stanley Grauel (1917-1986), an American Methodist minister who served on the crew of the Exodus 1947, the illegal immigrant ship that attempted to bring Jewish DPs from Europe to Palestine. Grauel was born in Worcester, Massachusetts to John and Jemina (Tiny) Grauel. His early life was deeply impacted by the Great Depression, which left his father unemployed and his family homeless for many years. In 1936 Grauel graduated from the Methodist Randolph-Macon Military Academy in Front Royal, Virginia. Soon after, his father died and Grauel moved back to Massachusetts, where he worked on the fringes of state politics and in Worcester law enforcement for several years. At his mother's insistence, Grauel enrolled at the Bangor (Maine) Theological Seminary in 1941 to study for the ministry. Soon after completing his studies Grauel became pastor for a group of five churches in the Stonington, Maine area. In 1942 as American involvement in World War II intensified, Grauel became increasingly concerned with the plight of European Jewry and sympathetic to the aspirations of the Zionist movement. Grauel's interest in the Jews and in Zionism was spawned by his close friendship with Judge Joseph Goldberg of Worcester. Grauel joined the Christian Council of Palestine (later the American Christian Palestine Committee, an organization dedicated to the establishment of a Jewish state) and in 1943 gave up his ministry to take a position as director of its Philadelphia office. The following year, Grauel attended his first Zionist meeting, which took place in Princeton, New Jersey. There, he met David Ben-Gurion and learned about the efforts of the Haganah, the underground Jewish army in Palestine. Soon after, Grauel met with a Haganah recruitment officer. He was taken with the mission of the organization's Mosad Le-Aliyah Bet (the Center for Illegal Immigration to Palestine), which since its founding in 1938, had organized the smuggling of Jewish refugees into Palestine in defiance of British immigration restrictions. Grauel enlisted in that effort, sensing that he had finally found his niche in life. From this point until the establishment of the Jewish state, he led a double-life, working for the American Christian Palestine Committee and clandestinely for the Jewish underground. His work for the Haganah soon led to his recruitment to the crew of the Exodus 1947 (originally named the President Warfield). The ship set sail from Baltimore on March 23, 1947. Grauel's official cover was as a foreign correspondent for the Episcopal journal, "The Churchman." When the ship docked in Marseille, Grauel flew to Paris, where he helped organize the transfer of Jewish refugees from displaced persons camps to the port of embarkation on the southern coast of France. Once the Exodus 1947 departed for Palestine, Grauel took on the role of ship's cook. He also served in an unofficial capacity as mediator between the crew and the passengers. During the struggle that ensued after the British Navy intercepted the ship off the coast of Haifa, Grauel tended to the wounded. He was enraged by the injustice of the British interception and the Navy's willingness to employ violence to subdue the passengers. Grauel was detained by the British as soon as he disembarked in Haifa and was placed under house arrest at the Savoy Hotel. There, Grauel held an impromptu press conference, describing his experience aboard the Exodus 1947. With the help of the Haganah, Grauel snuck away from his British escorts after the meeting. The escape was arranged to allow Grauel to give testimony before the United Nations Special Committee on Palestine (UNSCOP), which was then visiting the country. Grauel remained in Palestine only nine days before returning to the US. In the meantime, he had become a hero to the Haganah for his effectiveness in promoting sympathy for the plight of Jewish DPs and the cause of unrestricted immigration to Palestine. In America, Grauel maintained close ties to the Haganah and continued to speak publicly and participate in fundraising projects on behalf of the Jewish state, both before and after it attained independence. In subsequent decades Grauel lived in many places and was drawn to a variety of humanitarian causes, including the plight of the American Indian and civil rights for African-Americans. However, his chief concern remained the Jewish people. In the 1950s and 1960s he undertook missions to North Africa to investigate the situation of Jews living in Morocco and Algeria. In 1967 he campaigned energetically to raise money and support for Israel during the Six Days War. Finally, in 1975 he led one of the first tours of Jewish students to the sites of Nazi concentration camps in Europe. The Jewish community also rallied to his aid when Grauel suffered severe financial difficulties in the last decades of his life. Grauel received many prestigious awards for his efforts on behalf of the Jewish state, including the Humanity Medal, the Fighter for Israel Medal, and the Medal of Jerusalem.