Three young Jewish women sit in a rowboat on a lake or river in Bad Homberg, Germany. 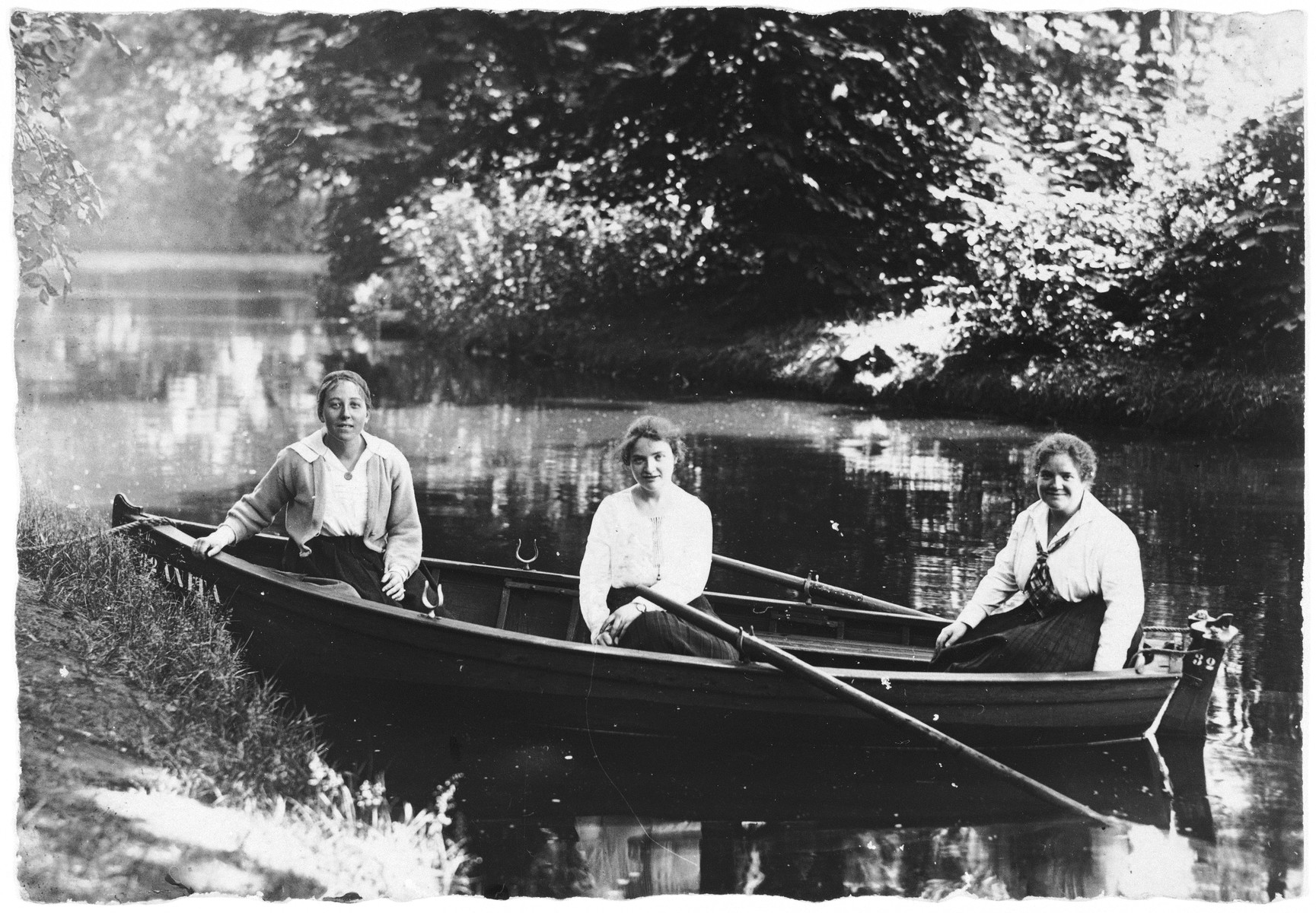 Three young Jewish women sit in a rowboat on a lake or river in Bad Homberg, Germany.

Hannah Feist is pictured on the left [probably with her sisters].

Biography
Judith Hemmendinger (born Judith Feist) is the daughter of Phillip and Hannah Feist. She was born on October 2, 1923 in Bad Homburg, a resort area near Frankfurt. The family was quite wealthy, highly educated, and religiously orthodox. Her father was a mining engineer and her mother held a doctorate in zoology from the University of Heidelberg. Judith had four siblings, Selma, Moshe (Martin), Jacob and Ellen. When she was five, her father took a new job and moved the family to Eaubonne, near Paris and began spending their summers in Megève, in southern France. Since they were the only Jews in the area, Judith and her siblings attended a public school and received private tutoring in Hebrew and Bible. When Selma reached high school age, the family moved to Paris so that the children could attend better schools. The Feists were vacationing in Megève when the war broke out in September 1939. Phillip was arrested as an enemy alien since he held German citizenship, and was sent to a camp in Normandy along with members of the German embassy and consulate. Surprisingly, Phillip got along well with the non-Jewish Germans interned with him and spent his time studying Talmud. The rest of the family was assigned a residence in Megève. After Phillip's release in June 1940, the family went to Roanne, but Phillip was advised by German officials to return to Paris since they could not guarantee his safety in the free zone. Hannah and the children remained in Roanne, and Phillip promised to return as soon as possible. Back in Paris, Phillip passed his days studying Talmud with a friend, M. Chouchani, in the Metro, the only place where he could stay warm. Phillip later left Paris at the request of Rabbi Schneerson (a cousin of the Lubavitcher rebbe) who asked that he come to Nice in the Italian zone to help establish a school in nearby Voiron. While at the Nice train station, Phillip was arrested and sent to the Gurs internment camp. He was later deported to Drancy, and from there, to Auschwitz in September 1943, where he was killed upon arrival. In the summer of 1942, Judith went to work for USSAC, a religious youth hostel. On January 1, 1943, under the alias Jacqueline Fournier, she went to Taluyers, ostensibly an agricultural school near Lyon, but in reality a religious hachshara (Zionist agricultural collective) run by the Eclaireurs Israelites de France (Jewish scouts) . Twenty-two Jewish boys and two girls with false papers attended the school. There Judith fell in love with a fellow student, Claude Hemmendinger. In mid-September, 1943 her mother called to say that her father had been arrested. She wanted to flee to Switzerland along with the two youngest children and asked Judith to accompany them. The family hired a passeur to guide them over the Alps. He brought them near Annemasse and then told them to go the rest of the way on their own. After crossing the border, they were apprehended by Swiss police and taken to a prison in Geneva. Following their release, Judith and her family were sent to a refugee camp where Judith worked as a teacher. She learned that the OSE was establishing a six-month class to train social workers to deal with the post-war situation. Anxious to leave the confines of the camp, Judith applied and was accepted. She also worked for the OSE interviewing children who had arrived with false papers in an attempt to reestablish their true identities and so be able to locate their parents after the war. In May 1945 Judith returned to France in response to an OSE cable asking for volunteers to care for child survivors from Buchenwald. She arrived at the Ambloy home for Orthodox boys to find that the director had a hard time relating to the boys and wanted to quit. Judith soon took over as the new director, remaining with the children after the home moved to Taverny. She stayed with the boys until September 1947 when the last child found permanent shelter. After the home closed Judith went to visit an aunt and uncle in London. One day she received a letter from Claude Hemmendinger asking to see her again. He was recuperating at his parent's home in Strasbourg after being wounded in battle in Palestine. They met in Paris and married shortly thereafter in September 1948. The couple then immigrated to Israel. Judith's mother survived the war and in 1949 joined her family in Israel.