Members of a Jewish ice hockey team wearing stars of David on their shirts pose in the snow. 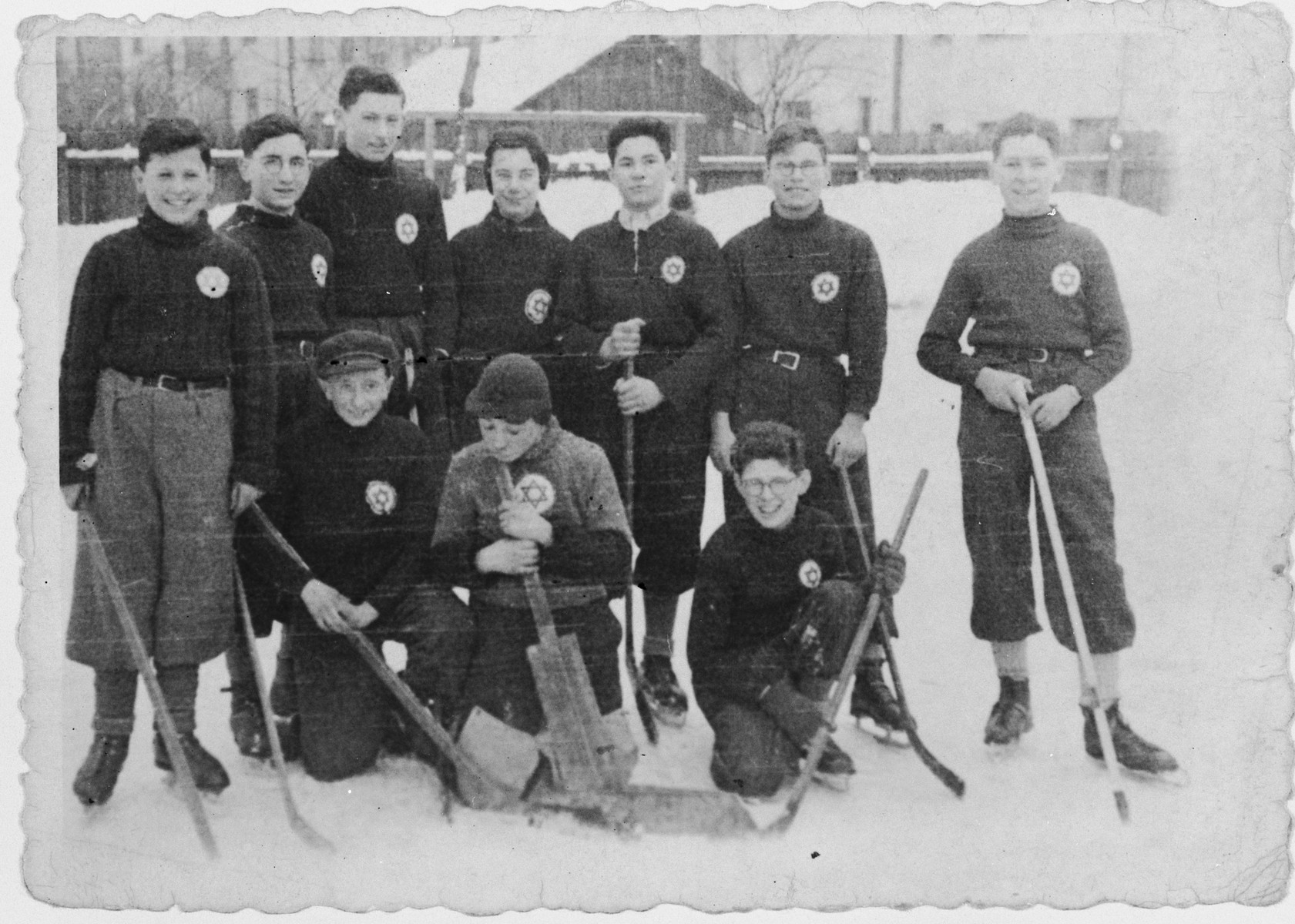 Members of a Jewish ice hockey team wearing stars of David on their shirts pose in the snow.

Biography
Arieh Klein is the son of Jakub and Eva Riegelhaupt Klein. He was born in 1927 and grew up in Zilina, Slovakia. In 1942 the first deportation trains to Poland passed through his town. Once, Arieh tried to help people who were in the transports. He was caught by Germans, but managed to escape through the back window of a bathroom. Despite this and subjection to extensive anti-Jewish legislation, his life remained relatively unchanged up until the outbreak of the Slovak National Uprising in August 1944. As the fighting approached, Arieh's parents received a phone call from a friend saying that they should leave Zilina immediately because the Germans were coming. The Germans caught Arieh as he tried to cross the border between Zilina and partisan-held territory. They let him go once he pretended not to speak German. The family tried to find a safer place to hide, and went to Sunekova Zavadka. From there they went to Banska Bystrica, and then on to Revuca where Jakub's sister lived. They remained there until October 22, 1944, and then escaped to Podbrezova together with Jakub's sister and her husband. Six days later, on October 28, 1944, the Germans suppressed the remains of the uprising, and Arieh and his family fled again. They went to Kaliste, a small village deep in the mountains, where they met Jakub's cousin, her husband, and their 7 month-old baby. They were advised to hide behind the village in a small cottage where everybody from the village had gone. Jakub's cousin went to the cottage, but Jakub feared that such a crowded hiding place could be easily discovered and decided to go elsewhere. That evening German soldiers found the cottage and forced the people inside to walk for four hours down to another village called Kremnica. After forcing everyone to dig their own graves, they shot them. After that close call the Kleins mostly hid in the woods. Once things seemed calmer, Jakub returned to Kaliste. However, the town was still under German occupation and two soldiers approached Arieh and his mother. Arieh managed to escape, but Eva was captured and only escaped later. Life was very difficult in Kaliste. Arieh had to go from house to house begging for food, and both he and his mother contracted typhoid. The Kleins stayed in Kaliste until March 18, 1945, when the Germans, after concluding there were no more partisans there, burned down the entire village and killed most of its inhabitants. Arieh decided to leave, but his parents stayed because his Eva was too sick to travel. Arieh managed to get across the village, when a mine hit his leg. He then got caught in the middle of some shooting and was shot in the same leg. Arieh managed to come to a partially destroyed house in the village where two boys were staying. Arieh was sitting behind the door cleaning his wounds, when Germans entered the house. They poured gas around the house and set it on fire. Then they shot the boys, and Arieh barely managed to escape. He was taken to a house where he met his parents, but the Germans also came there looking for people hiding in the attic. Jakub told them in German that he used to be a soldier for Germany, assured them that there was no one in the attic and led them upstairs. The Germans believed him and they turned away and left. Arieh's father had no idea that there really were people hiding in the attic. That day, Arieh's mother succumbed to typhoid. Arieh needed to save his family, so he got involved in business with a dentist who made gold crowns for Russians. He earned some money but gave it to a child who hadn't eaten for three weeks. He was sorry to lose the 20,000 crowns he had saved, but his father assured him that he would be rewarded for this. That same day there were planes flying by throwing down boxes with guns, money, and food. Arieh found one of the boxes. There were 5 million crowns in it and he shared the money with everyone. Arieh's injury was getting worse. He needed to go to the hospital. He was taken to Rimavska Sobota, and friends of his father found a very good doctor. He was told that the leg would have to be amputated. He almost died during surgery, but the doctor saved both him and his leg. He left the hospital on June 20, 1945 and went back to Zilina where he found his father. However, most of his family had died. In 1949, Arieh immigrated to Israel.