Studio portrait of Nechama Bawnik taken in the Lublin ghetto. 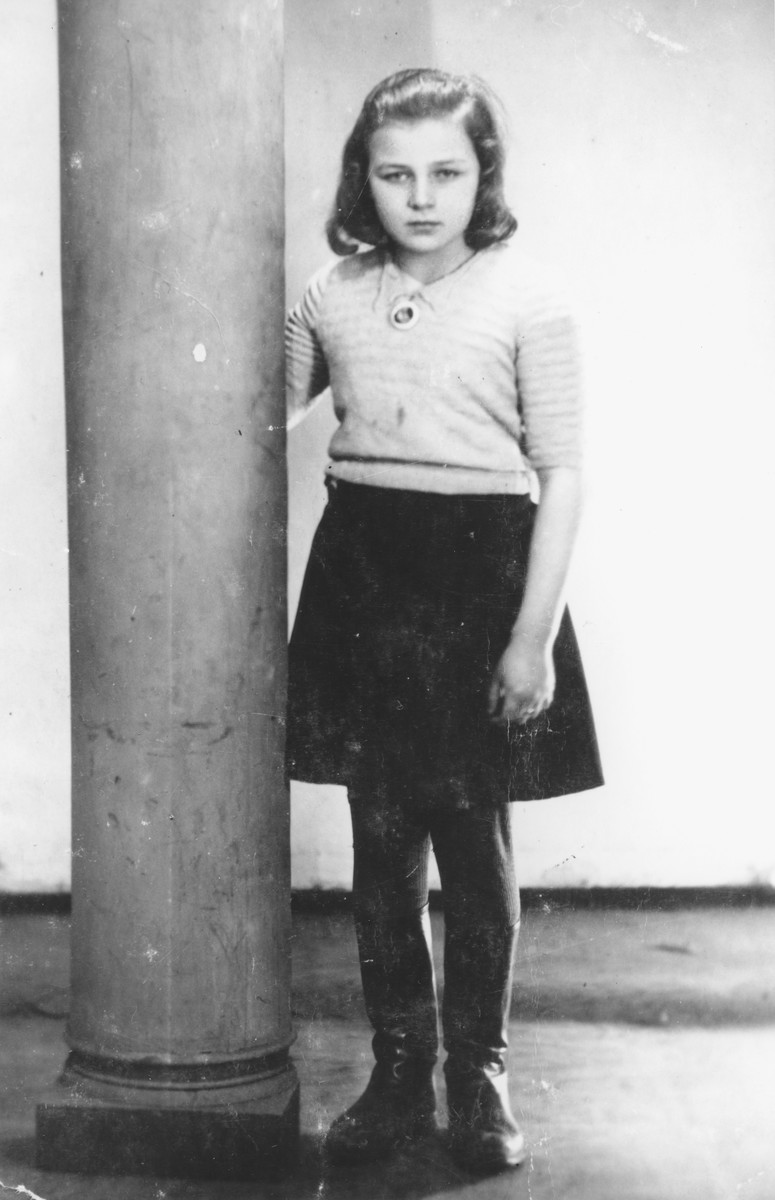 Studio portrait of Nechama Bawnik taken in the Lublin ghetto.

See https://encyclopedia.ushmm.org/content/en/article/lublin-majdanek-concentration-camp-administration.
See Also "Lublin Main Camp" in Encyclopedia of Camps and Ghettos, Volume 1 Part A.
Biography
Nechama Tec (born Nechama Bawnik) is the daughter of Roman and Estera (Finkelstein) Bawnik. She was born in 1931 in Lublin, where her father owned a candle-making business and a chemical factory. Nechama had one sibling, an older sister named Giza. Soon after the German invasion of Poland, Roman went to Kowel to see if life was better in the Soviet sector. Estera stayed behind and ran the chemical factory in his absence. One day she arrived at work to find a German sign forbidding entry and announcing the confiscation of the factory. She entered anyway to release a trapped worker. German police caught her as she was leaving and beat her. Soon afterwards, the Germans reversed themselves and permitted the reopening of the factory. They also allowed Estera to resume its operation. In the meantime, Roman returned to Lublin. Though the Bawniks had to move to a less desirable part of town and share an apartment with two other families, they enjoyed more privileges than other Jews. After the Germans took over the chemical factory, Roman established a relationship with the new commissar, who gave him work and protection. Estera found work as the housekeeper of the wife of a high-ranking Nazi official who shielded her from danger and gave her extra food for the family. When Estera's employer warned her of an imminent deportation action in March 1942, Roman approached the German factory commissar for help. The commissar not only agreed to legalize Roman's status, but also allowed his immediate family to move into the factory. Estera's brother Josef was not so fortunate. He was put onto a deportation train for Belzec. He managed to jump off, however, and after pretending to be dead, returned to the Bawnik's apartment. When German police came to look for him, Roman at first denied he knew anything, but after they threatened to kill Estera in his place, Roman gave away his hiding place. Estera was devastated and furious, but Roman explained that she needed to stay alive to care for the girls, and he promised to rescue Josef. After the spring deportations, a new ghetto was established in the Lublin suburb of Majdan Tatarski, which for a few months enjoyed a period of relative calm. Bored at home, Nechama began visiting the ghetto so she could play with other children. Eventually, she convinced her mother to let her stay there with her former tutor, Hela (Czuczka) Trachtenberg. At the end of the summer, Estera heard rumors of another deportation and came to fetch Nechama. Nechama wanted to stay one more night to say goodbye to her friends, and Estera relented. The deportation action, however, began that very night, and Estera and Nechama only barely escaped (while her tutor, Hela, was killed). After Lublin was declared Judenrein in November 1942, the German commissar warned the Bawniks that he could not shield them much longer. Their cousin, Bolek, who had connections to the Germans, agreed to help them get Aryan papers and find them a hiding place. (Bolek was later arrested for his rescue work and hanged himself in his cell to avoid accidentally revealing the names of those he helped.) Nechama and Giza obtained false papers under the names of Krysia and Danuta Bloch. They hid briefly in Otwock and later joined their parents in Kielce, who were hiding in the home of Tadek and Ziutka Homar. While Nechama and Giza were able to move around freely using their false papers, their parents had to remain hidden in the apartment. Giza obtained work at a German club, which allowed her to bring back extra food to the family. The family later moved out of the apartment into a nearby shack, which was also owned by the Homars. Roman built a special hiding place beneath the floor for emergencies. He also acquired a dog so that the barking would alert them if strangers approached. The Bawniks supported themselves with the help of the German factory commissar in Lublin, who sent them their valuables through a Polish messenger. When their money ran low, the Bawniks started a black-market bakery. Estera baked at night, while Nechama peddled the goods during the day. The liberation in 1944 did not bring an immediate end to the family's hardship. At wars end the Homars asked the Bawniks to leave Kielce so that their neighbors would not learn they had been hiding Jews. Nechama and her family returned to Lublin, where they discovered that their apartment had been demolished in the Allied air raids. For a time they lived with the former janitor of Roman's factory who has taken possession of all of their belongings. However, after their lives were threatened by members of the Polish Home Army, Nechama and Giza departed quickly for Lodz, once again resuming their Polish identities. Eventually, Nechama fled to Germany, where she stayed briefly at the Schlachtensee and Eschwege displaced persons camps. After a few months she moved to Munich, and in 1949 she immigrated to Israel, where she met her future husband, Leon Tec.